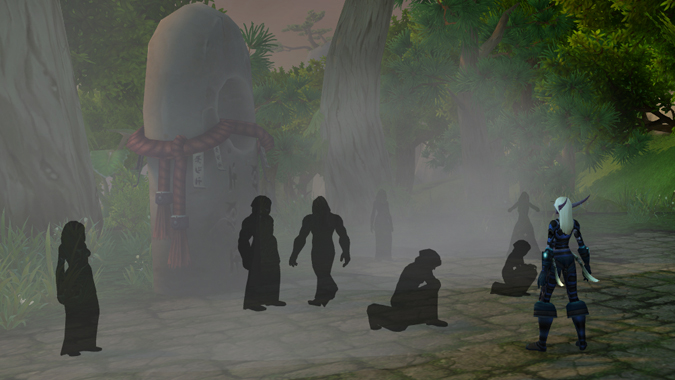 I think all the adventurers running through Pandaria a couple of expansions addled Lorewalker Cho’s head a little bit. I’m not sure what those shadowy figures are, but they’re definitely not the ancestors of my Nightborne. But then I suppose we’re in kind of a weird time loop anyway. Maybe it’s best just to humor him, right?

Let’s answer your questions, before Cho decides to start asking too many of his own.

Q4tQ: What’s your go-to “It’s cold outside and snowing and I wanna stay inside and play video games and ignore the world” activity? Battlegrounds and Rum? Dungeons and Hot Chocolate? Quickplay HoTS and OVR and the blood of your enemies?

We’re slightly out of snow-falling time out here — unless in saying so I just cursed myself to snowfall this weekend. But usually I like to spend cold nights in warm and sunny in-game locations, working on something that doesn’t require too much thought. Pet battles, or achievements, or farming interesting pieces of armor for my wardrobe, that sort of thing.

Being somewhere that looks warm in game doesn’t really make a difference, of course. But it feels a lot better than trudging around in ice and snow in-game and out, you know what I mean?

Q4tQ: How long is this Overwatch Archives event supposed to last? Because if this is just a once a year event like Uprising was, I’m going to be sad. It’s not just the PvE (which is heck-a fun) but there is so much potential in the Overwatch Archives as an event. I’d rather see it more often than every April. The holiday events are nice and all, but the plot and character stuff is far superior (imo).

This round of Overwatch Archives runs through April 30. Unfortunately, there’s been no discussion as to whether or not we’ll see another Archives event outside of April. There’s not really anything tying the events to April, honestly — it’s certainly wide-open for them to do  more at other times throughout the year. But nothing’s been stated one way or another as to when we’ll see more.

I do like the events, though. There are a lot of people that do — and Blizzard knows people like the occasional PVE event thrown in. They’re also aware that people like story stuff. I mean, the Retribution event definitely brought the story forward, and it even had a full-out cinematic this year. Whether or not this means we’re due for more story content in upcoming months…well that’s up to the dev team.

For me, it’s all about the story. If they give me something intriguing to chew on in the reveal, I’m all in. Legion’s been a really good expansion, story-wise, so I was curious to see where we were going from here. The Battle for Azeroth reveal gave me just enough to continue that curiosity — where are they taking the story? What about those Legion loose ends?

It didn’t, however, give me the entire story — and that’s the other half of what keeps me interested. Knowing the whole story before you play a game is just as exciting as watching a movie when you’ve already been told the entire plot. If you know all the twists, turns, and big reveals, there’s no element of delighted surprise to look forward to. I’m pretty sure the somewhat simple reveal we got at BlizzCon is just one part of a much larger story. I mean, at the Legion reveal, we were told Gul’dan was coming back, and the Burning Legion was attacking. We weren’t told much beyond that, and look at what the expansion gave us. The thought of all those stories we have yet to be told is enough to get me hyped every time, you know?

QftQ: I thought you could now send things through the mail/trade with people on other realms–not just your own characters, but friends and such. Is that true, or does that only apply to your own characters across realms (and occasionally factions)?

You can if each character is on a connected realm — otherwise, the same limits apply. For example, if I have a character on Sisters of Elune that wanted to send mail to someone on Cenarion Circle, I could. The two realms are connected. But if any of my characters on Wyrmrest Accord want to send mail off-server, I’m out of luck — Wyrmrest isn’t connected to any other realms.

Additionally, you can send items to your own characters across multiple realms, but they have to be Bind-on-Account items. You can’t just send a pile of gold to an alt on another realm, unfortunately.

Does anyone know if you get to keep artifact druid forms if you race change to one of new druid capable races, or would be locked in to that race’s custom forms only?

Unfortunately, we can’t actually create those new Allied Races on the alpha just yet. This means I don’t have an answer for you — it’s not something that’s been brought up anywhere that I can see. I would assume, since it’s a wardrobe option, that you can transmog to those appearances as long as you’re on a character of the same class. But keep in mind that’s an assumption — it hasn’t been officially verified one way or the other by Blizzard just yet.

Q4tQ: How “valid” or reasonable do you think the concept of mythic-only bosses or phases is in raiding? Cho’gall represented a storyline left unfinished for most players, Archimonde STILL doesn’t have a definitive status because who knows if the mythic fight was more canon or not (per Kosak), Rangaros was more reasonable, as was Sinestra, I suppose Gul’dan and Argus were okay? I don’t actually know what happened in those phases because I don’t mythic raid, but they didn’t seem like big deals on the face of it.

I don’t really have an issue with Mythic-only raid moments, as long as it’s not a major story beat. The Cho’gall thing bothered me because it was something that a lot of people would potentially miss — and it was the end of a storyline that had been playing out while leveling. Sinestra, on the other hand, didn’t bother me at all. There was no reference made to her presence while leveling, she had no impact on the outside story, nobody was looking for her.

I guess to me the difference is whether it’s just a bonus lore moment, or a dropped story thread. In the case of Cho’gall, everyone was expecting resolution, because everyone had leveled their character. The people that didn’t raid at the highest difficulty missed that resolution — to people that weren’t raiding Mythic, Cho’gall’s fate was a dropped story thread. It was something that just never got resolved one way or another, and that lack of resolution made the leveling story feel less meaningful as a result.

In the case of Sinestra, she wasn’t a character people had encountered while leveling in Cataclysm. There was no story thread to follow — she was simply a really cool piece of bonus content. Players familiar with lore would recognize her, but that recognition wasn’t necessary to enjoy the encounter. I mean, it’s a really big dragon in a secret underground cavern. You don’t need a lot of backstory to appreciate the coolness of that, you know?

To be perfectly clear — I don’t know if I’d call any of these encounters more or less “valid” in the scope of raiding. I definitely wouldn’t call them unreasonable — I mean, you’re raiding the highest level of content out there. Getting some extra stuff to beat up isn’t unreasonable, it’s a cool addition to the difficulty of the raid. It’s just that some story beats really need to have a resolution. Particularly those beats that every player, whether a raider or not, has been invested in. Limiting it to a Mythic-only raid encounter is like letting everyone read the first 3/4 of a really compelling novel, but only handing out the final chapter to a select few people. Sure, those few people are really happy, but everyone else is really annoyed that they missed the ending — and in some cases quietly wondering why they bothered to read the book in the first place.