The story of Zelia, Paladin of the Horde 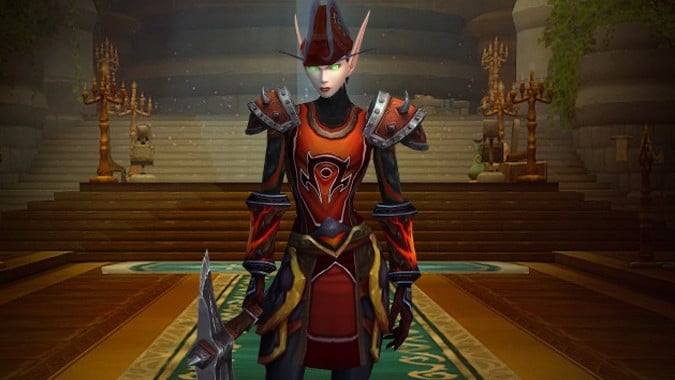 This character profile has been written for Zelia, one of our supporters. If you enjoy it, you can check out the other profiles we’ve written, too!

Her arms were tired. But at least there weren’t any demons left to kill.

“We’ve cleared the area.” The young Orc woman — Light, was I ever that young? — answered her from a nearby jagged spire of rock. Zelia had no idea where they kept finding them, young Orcs and Tauren and Trolls and even her own people willing to strap on weapons and armor and head out to the next blasted, demon-festering part of the Broken Isles. At the moment, she was mostly relieved there were any left. “Six wounded, two dead. On our side, I mean.”

“Including you, I see.” A moment’s thought and the Light surged from her hand, and the jagged cut over the Orc girl’s eye closed up. Her eyes widened. It always seemed to surprise people when Zelia called on the Light to close wounds or mend flesh. Perhaps it was the giant axe strapped to her back, it didn’t scream healer to people. But Zelia knew from experience the benefit of flexibility. “Take me to the wounded.”

She went to each. Luckily, none were beyond her skill. One of the dead wasn’t that dead, in fact — she called him back to life with the full power of the Light, as exhausting as it was. She was never sure if cases like his were just nearly dead or if she was actually calling them back from the shadow where all eventually go, and it wasn’t something she spent too much time worrying about. Finished with that work, she climbed the hill and surveyed the area again.

They’d flown in from Dalaran and hit the Fel-cursed patch of rocks at dawn. Zelia was thankful every day to be part of the elite — striking from the air with fellows from the Horde, people she trusted. People who knew the value of striking hard and fast. She’d been a child when Silvermoon had fallen to the dead, and she’d never forgotten the lessons it taught. Strength, first in yourself, then in those you ally with. Some of her people distrusted the Horde, but not Zelia. She knew that without their aid, the past years likely would have cost them everything.

Descending the hill, she spared a moment to stop and check on her gyrocopter. Her hand caressed the dashboard. It was silly, and she knew it, but she’d been born wanting to fly. Her mother had called her Quel’Belore. “My little high sun, up above the clouds.” Her neck sore from staring up with envy at the hawks wheeling in the air. Even after the dead had come and torn away the world Zelia had believed was forever, she’d held on to that dream.

The Horde had made that possible. Just as Liadrin had showed her how to touch the Light, how to bend it to her will… and then, how to stop bending and ask. Both lessons she held dear. Sometimes you need to use force, and sometimes, you need a clever tongue. She often enjoyed talking with the Sunwalkers about it. They had a different perspective, but they too loved the Sun.

“Form up.” She said once she was sure all her people were fit to travel. She looked over their ranks again. “We took this place. Now it’s time to take to the air. Let the ground pounders fight to hold it. We’re for the skies.”