The Battle for Azeroth beta is rolling along, and with the expansion prepatch probably only a few weeks away, players are starting to wonder how their favorite classes will be doing when that patch hits. Battle seeks to increase class distinction by giving everyone different strengths and weaknesses within their roles, and that could mean a different game for healers. While many guilds will run with whatever healers they can find, others will look for a synergistic arrangement of classes.

So just how will healing look in the expansion? (And is it too late to reroll?) Though the beta’s final balancing pass has yet to be performed, we can still do some analysis based on the mechanics, talents, and spells which provide the best insight into the design intent for each class.

Let’s take a look at the strengths and weaknesses of each class as it stands in the beta today. 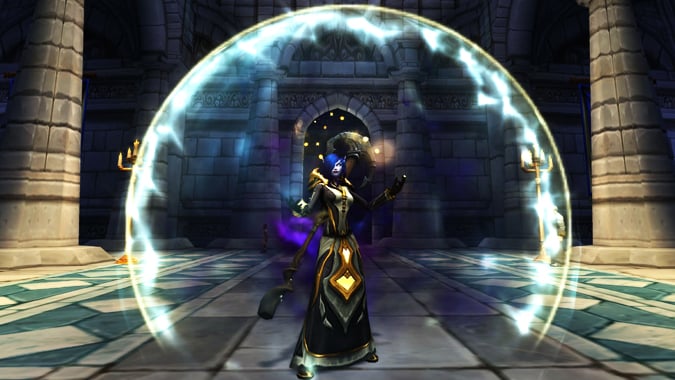 Your strength is preventing damage, stabilizing the raid, and ensuring players don’t get one shot by mechanics. You can even talent Atonement to give damage reduction as well as a healing boost. However, the loss of Plea, The Pentient, and Light’s Wrath will mean you rely on other healers to bring everyone back up.

Discipline requires you to be able to anticipate damage and know the fights well. It does better in Mythic raids than Normal, as in Normal, players are more prone to mistakes which create unexpected burst damage. In Mythic, not only do players know the encounters better and make fewer mistakes, but when a mistake is made it’s usually a one-way trip to Wipesville, population: you.

Priests are unique as the only class with two healing specializations. It’s good to know both, even if you main Discipline because there will be fights better suited to Holy like Imonar.

While Beacon of Faith is less powerful in Battle and other healers received some single target heals like Photosynthesis or Earth Shield, Paladins remain the premier tank healer. Beacon of Faith is the ideal mechanic for two targets needing constant heals, a perfect description of the current raid tank setup. The biggest change in Battle is you might need to cast extra heals on your Beacons with the nerfs to Beacon and without the Tier 21 bonuses.

Blizzard has strengthened the Battle Cleric fantasy with Avenging Crusader. Every two minutes, whip out your hammer, hit monsters and heal the raid. Divine Shield should keep Holy Paladins ensconced as a strong choice for high end Mythic plus keys.

Aura of Sacrifice is no longer a signal for the other healers to go AFK. It has become a souped up Devotion Aura, which will reduce some burst potential Holy Paladins had by stacking their cooldowns. Reducing incoming damage can be better than healing it back at times, but damage prevention won’t show up on your run of the mill healing meters — which could make Paladins look weaker than they are. I hate meter watching, even more so for tanks and healers, but it does happen.

One of the big things you’ll miss in Battle is the Legendary “reincarnate” cape. Holy Word: Serenity, Holy Word: Sanctify, Prayer of Healing, and Flash Heal remain your core spells. Holy Word: Sanctify is now affected by Renew and combined with the buffs to Renew, you might have a reason to keybind it again.

If anyone is going wrest away the title of utility healer from Restoration Shamans, I’d put my money on Holy Priests. Besides the mandatory static Stamina buff, Holy brings three big raid cooldowns: Symbol of Hope, Holy Word: Salvation (which has an effective cooldown of four to five minutes in practice), and Divine Hymn. If timed well, Symbol of Hope can extend the fights long enough to turn some close wipes into kills.

You also can’t look at Holy Priest in a vacuum. Priest is the only class with two healing specs so you have to look at the Holy/Disc package. The Holy Priest player can easily switch to Discipline depending on which is better for the fight.

The Mana Tea talent is moving down to level 45, so it will no longer conflict with your other level 100 options. At one point in beta, the talents were spread out in such a way that you could go double mana regeneration or double survivability, but in a later build, this was changed so you have a mana regen row and a survivability row. Soothing Mists and Thunder Focus Tea were both redesigned.

The only raid utility Mistweavers get is Revival. On the upside, it’s instant cast which should help you stay mobile. This general lack of utility could also have been a factor in Monks getting the Mystic Touch debuff, which will mean raid leaders will want a Monk in their raid, though it doesn’t have to be a Mistweaver.

Instead of being a general AOE, Vivify now heals your target plus anyone with your Renewing Mist. It’s further aided by the change the developers made under the hood to Renewing Mists.

Originally Posted by Sigma (Official Post)
It should not be trying to jump unless there is an injured target that doesn’t already have your Renewing Mist on them.

With Rising Mists, Rising Sun Kick will heal your group if they have your HoT on them and Essence Font will cover almost all of the raid with the HoT. You’ve got several synergies to reset the cooldown on Rising Sun Kick. It’s a bit like Avenging Crusader — but will we still call it Fistweaving or is it now Kickweaving?

I think of the Battle Mistweaver Monk as something of a cross between a Resto Druid and a Holy Paladin. They have many HoTs and good mobility like Druids. They have a mini Beacon effect and a talent to convert damage to healing like Paladins.

Displacer Beast is gone and now you have Tiger Dash because only Mages are cool enough to Blink. Tiger Dash is adequate for dealing with most raid mechanics but it won’t get you out of the fire as fast as Displacer Beast did. The weirdest change is no longer being able to channel Tranquility on the move. Instead you get a heal over time added to Tranquility which gets stronger the longer you channel. It’s odd for a class like Resto Druid, known as a mobile healer, to have their iconic raid cooldown spell make them immobile.

My main concern is the change to Rejuvenation. It runs out too fast and costs too much mana. You won’t be blanketing the raid with them. The bear form nerf hurts a little bit in high end content, but it’s still strong.

Resto Druid shuffled some talents around the tree. For example, you can now take both Spring Blossoms and Germination at the same time. Essence of G’Hanir has been baked into Flourish. Photosynthesis looks like an interesting talent, more so if your raid lacks a Holy Paladin and you do a lot of tank healing. Even so, I’d have a hard time taking it over Flourish. If you do need some single target healing, Abundance should help.

A moment of silence please for Ancestral Guidance. Good? Okay, now, let’s welcome back Earth Shield as well as Cloudburst Totem. Cloudburst has gone back and forth between counting overheals and not, but it’s currently counting them, which makes it extremely strong. But the class still needs your raid to cooperate to get the most benefit from its spells.

Resto Shamans bring a whole bag of raid utility. No raid leader wants to zone in without Bloodlust. Spirit Link Totem has been and will continue to be key to many successful raid strategies. Healing Tide Totem can be used on the move, unlike Tranquility. Earthern Shield Totem and Ancestral Protection Totem are mutually exclusive talent choices, but both provide great raid utility.

While many specs lost their AoE stun, Shamans retain theirs in Capacitor Totem. Combined with Nature’s Guardian and Spirit Wolf, Resto looks to be much improved for Mythic plus dungeons. The balance pass will be key to ensure you can cast some AoE heals in five mans without going out of mana in a hurry.

The healer meta in Battle for Azeroth

The developers have done an excellent job of incentivizing a diverse set of classes. If I was building a raid healing team, I would want to minimize any overlap in classes except for the two Priests. I’d start with a Holy Paladin for tank healing and a Discipline Priest for shields. I’d add in Resto Shaman and Holy Priest for their amazing utilities. That would be my core healers, but I’d want a Monk and a Druid in my team capable of going heals on the nights we need five or six healers — though I’d also want them well versed and geared in their offsets.

It’s important to remember this meta thinking will only be important at the highest levels of raiding. In Normal and Heroic, your greatest utility as a healer of any class will be your avail-ability.

Many thanks to MadSkillzzTV, FinalBossTV, and HealClass for their healer videos which were invaluable in researching this article.