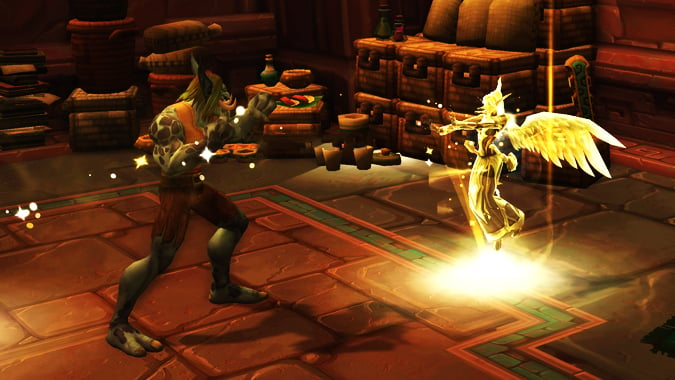 Yes, hi, I’m the person who legitimately leveled as Holy both on Legion beta and on live when Legion launched. In fact, I leveled my main as Holy and my alt as Discipline just so I could be legit. Holy street cred, you know? Unfortunately, in Battle for Azeroth, leveling as Holy isn’t quite the best strategy. Not that it was before, it’s just that this time there are fewer benefits. They don’t really outweigh the negatives. But if you really don’t want to play Shadow or Discipline, or you just happen to feel really comfortable with Holy, here you are. 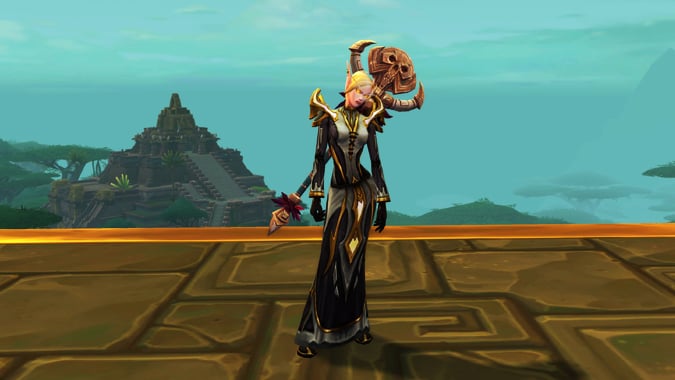 Anyone familiar with Holy will probably recognize the DPS rotation. It’s relatively similar to Legion leveling. Holy is first and foremost a true healer, so what DPS spells and talents it has are nominal. Keep in mind, I fully know Holy isn’t meant for actual DPS. I’m still critiquing it because it was doable last expansion.

The DPS spells are the usual: Smite, Holy Fire, Holy Word: Chastise, and Holy Nova. Smite and Holy Nova have a chance to proc a free Holy Fire to add another stack of the DOT (it caps out at two stacks). Chastise will do a good deal of damage, and it’s especially great when paired with Censure. Battle for Azeroth nerfed Serendipity, now called Holy Words, so it takes a little longer to get Chastise back off cooldown.

As for talents, you kind of have to make do with what you have. There’s only one real DPS talent, Censure, and the others you just have to tailor for your situation. In the first row, Enlightenment is okay, but usually if you die while leveling it’s because you couldn’t cast fast enough to keep up with the damage rather than from lack of mana. Trail of Light is only useful if you’re questing with someone else, since you need another person to take advantage of the Flash Heal replication. Enduring Renewal probably works the best here. With the occasional Surge of Light procs or Serenity, it’ll automatically refresh Renew, making it one less thing to cast. 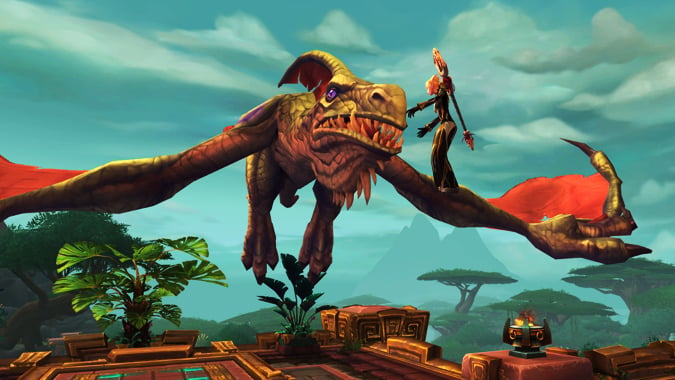 Level 30 is the one and always Angelic Feather. Although, Perseverance could be really useful if you’re particularly squishy and good about keeping Renew rolling on yourself. There’s also only one option at level 45 — Light of the Naaru. Besides the fact that it reduces the cooldown on Chastise, there are few situations for Guardian Angel, and extending your Spirit of Redemption is useless because you can’t cast DPS spells while in it. Of course, that’s if you’re by yourself. When you’re in a group, you can take a more healer-oriented approach.

The level 60 talent row is the one best suited for DPS. Censure is the best option because of its stun. You could try Shining Force for mass pulling, but its 45 second cooldown is prohibitive and your only AOE spell is limited to your immediate vicinity. Psychic Voice only helps with running away, since damage breaks the fear. At 75, you have your choice between single or AOE healing. I like Surge of Light when leveling by myself because it’s passive and can proc from Smite, but Circle of Healing always has a soft spot in my heart for quick AOE in a group.

Level 90 gives you a choice between Divine Star and Halo. I usually choose Divine Star just because Halo has such a large range and higher cooldown. And the last row at level 100, Apotheosis is your best bet. It’ll give you a lot of burst damage from multiple Chastises/Censures. Holy Word: Salvation is a raid cooldown, and Cosmic Ripple is more for a lazy group healing situation. 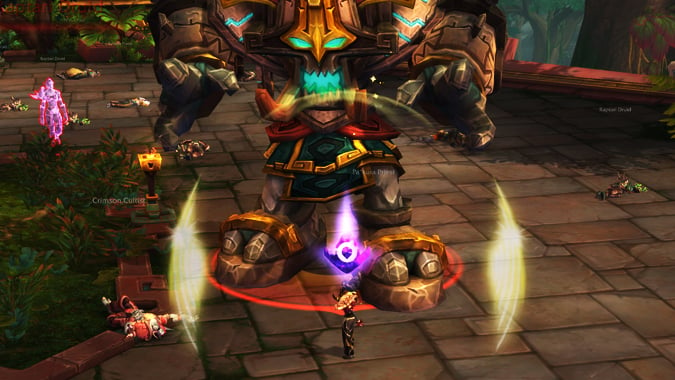 My old favorite, Censure plus Chastise, was just as useful as always. The downside is that the larger things that could really benefit from a quick stun are usually immune. However, the stun isn’t broken by damage. If you do get it on something that’s annoying, you can keep dpsing with nary a concern…for 4 seconds at least. Unfortunately it was nerfed by a whole second from Legion to Battle. But it’s the one thing Holy has over Discipline.

Surge of Light is great just because it’s instant cast and it can be proceed with Smite casts when you’re dpsing. This plus Renew are the closest you get to the passive healing that Discipline benefits from. It’s not that they’re bad, they were great in Legion. It just seems like things hit harder and the usual spells don’t keep up as well as shields and Atonement do. That and the longer you take to kill something, the more opportunities it has to hit on your face. 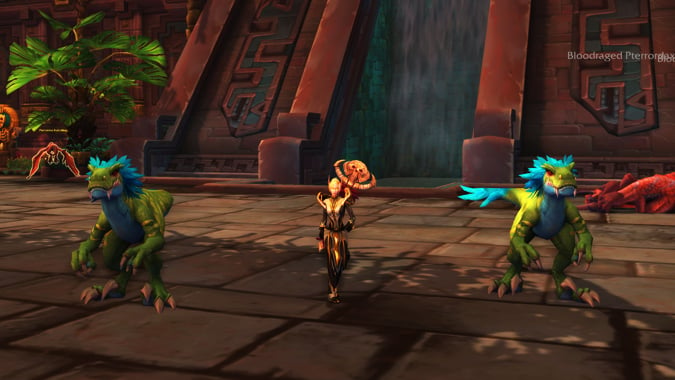 Unfortunately Holy’s just not built for solo DPS. Now, I know, you’re probably saying “that’s really obvious” right about now, but hear me out. In Legion, Blizzard touted the fact that healers would actually be able to stand on their own when questing or leveling, instead of always being relegated to a DPS spec. For someone who hasn’t liked Shadow (I can sense Mitch already getting indignant) for several expansions, this was a godsend. And in Legion, it was actually doable. Perhaps not the most streamlined or min/maxing, but it worked and it wasn’t terrible.

In Battle for Azeroth, it just doesn’t really work. Sure, it’ll get the job done, but Discipline is faster and more hardy. I guess shields will do that to you. In Legion, there wasn’t too much of a difference between the specs. Discipline could power down just about any elite. But Holy had AOE in the form of Holy Nova to take care of all the annoying things. At one point it was really easy to just gather things and AOE them down. Now though, Discipline also has Holy Nova. Holy’s only remaining perk is its stun talent. Chastise and Censure are still really good, but they just don’t edge out all that Discipline has going for it. 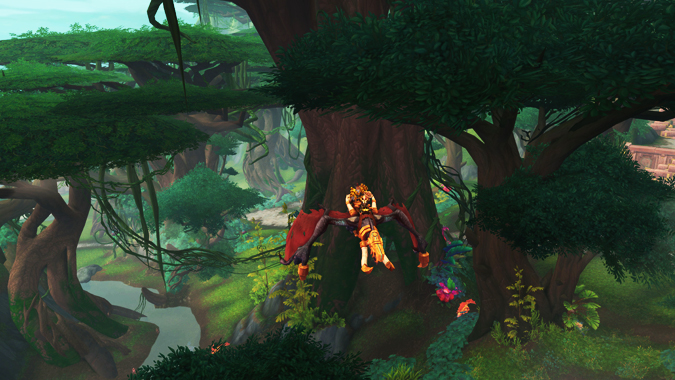 If you happen to pull several things at once, you’ll spend a significant amount of time healing yourself. Now, this is kind of alleviated if you happen to get Resounding Protection on one of your Heart of Azeroth slots. However, it was a stark contrast to Legion, where I could just use Renew and Surge of Light procs to keep myself up, while killing things one by one. Here, I found myself using Holy Word: Serenity more often than not when things were wailing on me. It’s an even starker contrast to Discipline’s automatic Atonement healing just from damage.

There were two main downsides to questing as Holy. First, it’s just plain slow. Second, it doesn’t keep up as well when confronted with more than one mob. It feels like it takes forever to DPS something, even if you get free Holy Fire. Holy Word: Chastise is the only thing that does any real damage. Holy Fire feels like it’s negligible and Smite just feels small.

Since Holy Fire has a cooldown, it’s also very limited. You can’t pull with it like Discipline’s Shadow Word: Pain, nor can you blanket it on a bunch of mobs for AOE. Holy Nova only does a small amount of damage and it’s not very effective if you’re just using that to AOE. Divine Star does a little more damage, but its cooldown was increased from the 10 seconds on live to 15 seconds, making it harder to utilize. 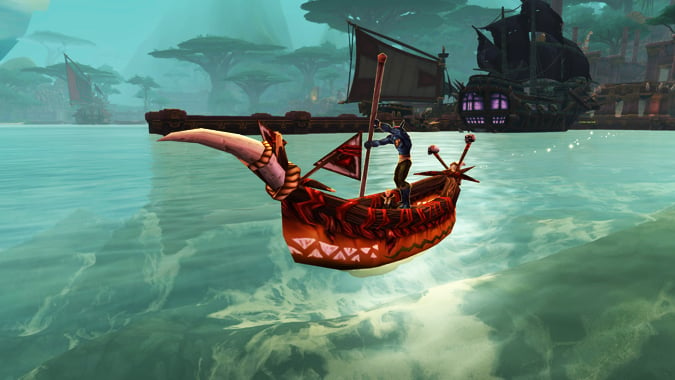 Leveling as a healer

If you really want to level as a healer, it’s not impossible. Leveling solo as Holy is just very slow. You’ll get there eventually. Discipline is probably the best of the not-Shadow specs to choose for solo leveling if you prefer the glowy side of life. It does good DPS and as long as you keep a shield on yourself, your Atonement heals will usually take care of everything. If you’re dead set on staying Holy, you’ll find better success in a group, especially if people are grouping up to participate in the new PVP War Mode. There aren’t many situations where a true healer is needed in group leveling, but you can be sure you’ll be very needed when the enemy comes attacking.