The Queue: Look at all the clucks I give 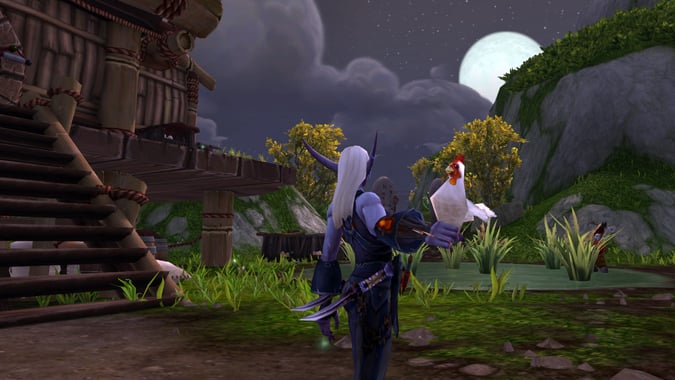 Why yes, yes I did spend a chunk of my vacation grinding rep with the Tillers and earning best friendship with all the farmers so that I could rescue a dog. Look, we all have our priorities.

My priorities now are answering your questions, so let’s get to that, shall we?

This expansion brought us a reason to keep doing WQs long after getting exalted – paragon chests. However, I’ve been working on the last four rare items from the paragon chests for a few months now (semi-casually, focus missions on gold and rep tokens for those four, burn them all during Faire week on my one human character to maximize the effect – usually 4-5 chests from each per month), and I’m STILL waiting to see those last four mounts.

Do you like the RNG of this, or would you rather have a longer bar (say 50 or 100k past exalted) where at the end of it, you definitely get the reward?

I’ve had really good luck with the Paragon chests — I’m just missing one mount from the Army of the Light. Having said that, I don’t think the bar should be longer, but I wish there were a currency method in place as well. Like if you open a box and it doesn’t have the mount/pet/toy or whatever, it gives you a small amount of unique, reputation-based currency instead. At some point, when you’ve exhausted the patience of the RNG gods and accrued enough currency, you could simply purchase the mount/pet/toy or whatever instead.

Blizzard could go ahead and make that final cost pretty high, so it’d take you a lot of boxes to purchase the goodies — but it’d still be tangibly obtainable someday, instead of just grinding to infinity. One might say “But if you can buy the mounts, then you won’t continue grinding rep after you’re done!” but I’d counter that with pointing out that once I got the rewards from RNG, I stopped grinding that rep anyway.

I mean, when you look at games like Overwatch, you can either get skins from loot chests, or you can grind out the currency you need to purchase the skins. Getting that currency requires gameplay — getting the Paragon chests in the first place requires gameplay, too. So wouldn’t it make sense to implement a similar, less soul-crushing system? I’d like to think so.

Q4tQ: In the Windrunner comic one of the things the Void tells her to do is take Silvermoon for herself. Do you think she might try to replace Lor’themar as leader of the Blood Elves? I know it would separate her and Turalyon, but she seems to need to follow her own path since her affiliation with the Void.

The Void likes to say a lot of things. That being said, this thing is particularly silly, because the Windrunner line doesn’t really have a direct claim to the throne, and Alleria knows it. Still, there might be a glimmer of truth behind that statement, which is probably why Alleria was pushing so hard to try and bring the Blood Elves into the Alliance. She wouldn’t necessarily be taking Silvermoon “for herself,” but had the Blood Elves gone that route, she likely would’ve been in a much higher position, politically speaking — people would have kind of naturally looked to her for guidance in dealing with the Alliance, since she’d been doing it all this time.

Q4tQ: High elves have a lifespan of several milennia, so I expect them to have a memory capable of managing so many years, but what about Turalyon? He’s just a human (albeit “enhanced” by the Light), how is he able to keep memories of his son, let alone remain sane, after a thousand years? Doesn’t his mind degrade with time?

We don’t actually know what the heck the Light did to Turalyon when he became Lightforged. I’d assume if it stretched his life out to impossible lengths, it did the same with his memory. After all, a soldier of the Light isn’t exactly going to be super effective if he lives a thousand years but loses all capacity for thought at age 100 or so, right? He’s kind of a different creature altogether at this point. Honestly, I’d hesitate to even call him “human” right now — the Light did stuff to the guy.

I’d like to think that perhaps the bobber manufacturers looked over their wealth of fun bobbers and said “What if chicken, but water?”

Q4Q: Do you think the story chaining of the expansions is something that helps or hurts the story telling of WoW? Bonus, since this is the third in the trilogy, which race would be the ewoks?

I love the story chaining! Earlier expansions were just kind of…singularities, you know? I still think Blizzard could maybe do a better job about that transition, however. Right now it’s like one expansion leads into the next, but we completely ignore what we left behind. The Vale in Pandaria is still all messed up, it’s our fault, and we didn’t really do anything beyond planting a single tree. The world is still ravaged from the Cataclysm, despite the Earthen Ring and the Cenarion Circle’s supposed continued efforts to fix things. We left Draenor with a promise from Yrel that she and the rest of the Draenei would be there if we needed them — and we didn’t even think about asking them along to help against the Legion attack on our world.

But I do like the idea of a cohesive, thematic story that stretches across expansions, though. What we do does have an effect on our world. It gives us a better reason to travel from place to place than the standard “Oh hey, a Big Boss™ has randomly decided to rear its ugly head, let’s go fight it.” Sure, we still have said boss, but there’s better reasons behind why it decided to pop up, and what it’s trying to accomplish.

As for Ewoks, I vote the Tortollan.

Q4tQ: anything new for the Midsummer Fire Festival? It starts 6/21.

Haven’t heard anything about it yet! Last year they added a new toy and a new pet, but I don’t think anything’s been datamined for this year’s festivities so far. There’s still an Heirloom Armor Casing you can pick up though. If you haven’t upgraded your heirlooms to 110, that might make the holiday worth it? Personally, I’m hoping we see a new toy or two. I like collecting those.