It’s not that Arms is bad on the Beta, but it does have some problems with rage generation being kind of… should we call it wonky? Let’s call it wonky. Certain talent choices can be super great for rage gen, or they can be rage sinks. I’ve kind of switched over to Fury for leveling — while it lacks the post-fight restorative punch of Second Wind, with Impending Victory it’s still a lot better than live. But Arms is getting some love in the build yet to come, and Solanis, a Class Designer for World of Warcraft, has posted to the forums with those changes and their intended effect. 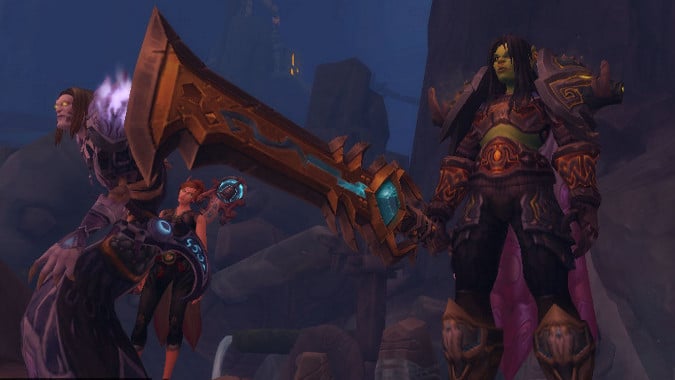 Peaks and valleys are the enemy

The goal is simple enough — smooth out rage generation so that it neither has droughts nor periods of so much rage that your only limitation is being locked by the global cooldown. In order for rage generation to matter without being penalizing, you need a somewhat steady flow but still periods of low rage generation.

The first two changes Solanis discusses are a simple 16% increased rage from auto-attacks and a slight increase in Tactician procs up to 1.4%. Since Overpower doesn’t cost rage, this combination will increase Arms Warrior static rage generation and give them more procs of a no rage cost attack that buffs Mortal Strike damage. This will also have the benefit of making it more likely that you’ll have enough rage to use Mortal Strike after hitting that Overpower. The goal is to make Overpower more prevalent in the rotation to prevent Arms for creeping into just hit Slam all the time territory. That’s understandable, if you’re trying to avoid either GCD locking or rage flooding.

But the problem isn’t just that Arms is low on rage. The problem is that they can be low or crazy high on rage, depending on talent choices. So how are they going to address this? Solanis mentions that talents are getting shuffled and in some cases removed or replaced to make sure that we’re not seeing so much rage starvation or any rage gluts.  The four talent changes are:

Now, I’m not sure I like all these changes. The Avatar/Fervor swap is pretty easy to grok — they want Avatar to be a DPS cooldown among DPS cooldowns while Fervor of Battle goes with other talents that allow you to change your rage spending habits. With Fervor at 45 and Trauma gone entirely, you’ll be picking between applying Rend, using Execute more often, or replacing Slam entirely with Whirlwind. This makes the 45 talent tier all about customizing your rotation.

Losing Trauma is going to cost some AoE DPS, though, since Whirlwind won’t be throwing 6 seconds worth of bleeds on everything it hits anymore. I get why, but I want to see if that Massacre redesign can provide anything like that kind of DPS. Currently, you could have Trauma and Fervor of Battle, so you could hit Whirlwind, get a free Slam, and apply a bleed all over the place.

Frankly, I think this version of Massacre is pretty underwhelming compared to Trauma, but we’ll see. The Skullsplitter nerf is understandable, if not something you like to see, and the change to Anger Management was on the wall the moment people started reporting how up and down Arms rage generation was.

As long as Second Wind is still in the talent tree, I’ll still keep Arms as one of my go-to specs, but I’m definitely curious about that Trauma change. It might end up being fine, but I feel like Massacre won’t really provide enough damage to be worth losing it. But I admit, we’ll need to see how it shakes out before we can know for sure. Not having Avatar affected by Anger Management is an interesting choice. It’s not one I like, but it’s an interesting one. I think in the end it might end up feeling underwhelming.

For the complete post, go to the forums or check below. It’s definitely an interesting time for DPS Warriors with the recent Fury changes and now these.  I’m really glad to see Solanis on the forums providing us with some insight into the whys and wherefores of changes to the spec, it makes it easier to evaluate what’s coming. And I’m curious to see how the new Overpower animation looks.

In the next Beta build, you’ll see a few changes for Arms that should address the Rage economy issues pointed out in threads like this one. The baseline pacing is slightly lower than intended, and talents can cause too big of a swing in either direction (slowing down or speeding up the pace).

This adds more button presses to the rotation regardless of your talent build, and pushes Overpower more than other abilities to avoid creeping too close to “Slam-spam” territory. The moment we’re trying to eliminate as much as possible is the, “I have enough Rage to Slam right now, but I don’t know if I’ll have enough to Mortal Strike afterwards unless I have a swing timer.” These changes add enough Rage, and enough Overpower procs, to make that a rarer occurrence.

However, pumping more Rage into the rotation doesn’t solve the problems with certain talent setups that have been highlighted here. There are a handful of Rage management talents that have big impacts on the spec’s feel and flow, but it is easy to accidentally put together a build that is either starved or flooded.

• Avatar and Fervor of Battle swap places (Avatar to 90, Fervor to 45).
• Trauma removed, and replaced with the new Massacre design: “Execute is now usable against targets below 35% health.”

This makes the purpose of each row clearer. 45 is all about spending more Rage. The row will have a more predictable impact on total button presses over time, while each talent still has a distinct impact on moment-to-moment gameplay.

Similarly, the 90 row is now all about cooldowns. Putting Avatar and Deadly Calm against each other limits the pacing swing between different talent setups, as well as lowering overall burst potential (something at which Arms already excels). Having strengths is important, but pushing them too far can lead to feeling like you’re a one-trick pony.

Skullsplitter was adding too much activity, relative to the other options on the 15 row. Even with this change, it is still the most active choice for players who enjoy being closer to GCD-locked.

Rather than adding Avatar to Anger Management, we’ve opted to keep it simpler on the surface while still having all three 90 talents interact with it in different ways: In For The Kill is directly buffed, Avatar feeds extra Rage into Anger Management, and Deadly Calm makes it easier to set up for the more regular Colossus Smash windows.

Oh — we’re also trying out a different animation for Overpower.

As always, thanks for the feedback and discussion!