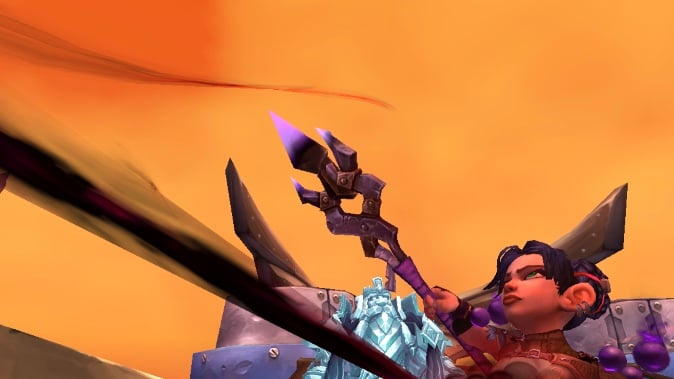 I’m sorry, y’all, but no race in the game is as fierce looking as a determined Gnome.

Let’s say someone hypothetically hasn’t been working too hard on their characters because they just did LFR and not even on all their toons, and now, in this final week suddenly thinks, “I should get the mage tower appearances!” How quickly could this hypothetical person gear up toons? Would they only be able to do it for one spec?

Okay, nevermind, that’s just going to be entirely too wordy to keep up. It’s me. Let’s talk.

The Mage Tower challenges seem to vary greatly in difficulty. Like apparently there’s a super easy Affliction Warlock strategy for their scenario. Everyone seems to agree that the healer scenario is garbage and that Jarod Shadowsong is the worst tank in the Warcraft universe. (Okay, that bit about Jarod I’ve actually only heard from myself. But I think it’s an accurate assessment.)

Item level definitely helps, but I’ve seen people do these with modest gear and DPS levels. But a lot of these fights aren’t just about raw damage or healing output: they’re about knowing the fight mechanics, and smoothly executing responses to said mechanics. You need to know who to DPS, who to interrupt, who to CC, who to heal, and you need to be able to do those things quickly and accurately. For example, on the healing challenge, there are several waves of mobs you need to kill while keeping your party alive, including archers who do a mana drain DOT. You can CC them or keep one of your party members between you and them so they take the DOT instead. But most waves involve multiple adds, some of which focus on you and you have to run around the room like crazy. But if you don’t do something about that archer, and take that DOT? It’s almost certainly a wipe. The healing challenge requires raw HPS (and DPS), but more than that it takes coordination. (Which is probably why I’m only getting to stage 5.)

So I’d say look up a strategy video (or several) to get a feel for the mechanics of the fight, and then give it a try with whatever you have. See how you feel about it. (Addendum: Unless you’re in really bad gear. But if you have a set of Legion BOAs or Broken Shore gear, which will put you around 880, I think it’s worth a try.)

If that gets you nowhere, start gearing up. I think someone in the comments already mentioned buying relinquished gear from Argus, which is a great start. You can also run Antorus LFR for 915 gear and, when you get towards the end of the Argus quest chain, you’ll get the quest for the free Legendary ring from Antorus. It’s not an awesome Legendary, but if you don’t have any, it will still help.

And today’s Artifact boost is absolutely helpful. When you log on, run through those Silithus quests (remember, you have to do all the Magni stuff first if you haven’t) and get up to concordance 75. Then hit up the Netherlight Crucible to pick up your bonus traits, then go out there and win.

TLDR: I think one is definitely practical, but depending on the challenges you need to do and the amount of time you’re willing to put into it, you could probably manage more than one, especially since the Mage Tower is up all the time now, so you’ll never have to wait to make an attempt.

Do AP tokens have a vendor value?

Yes! Now that your Artifacts are as maxed out as maxed out can be, AP items can be sold to rack up that sweet, sweet gold. The value seems to depend on the amount of AP granted, but so far I haven’t made a killing on these, getting between 10 and 25 gold from each.

We’ve been getting Timewalking about two expansions after the content was current, which seems like enough of a gap where you can go back to those dungeons and think “oh, fun, I remember this with fond nostalgia!” instead of “ugh, are we really still doing this?”

Okay, I’m not sure I remember much from Warlords of Draenor with fond nostalgia, but maybe when Timewalking arrives I will.

Q4tQ: Was the diablo double goblin event enough to get you back playing diablo?

I thought I was going to jump in and enjoy the goblin-killing fun (sorry goblins), but I haven’t yet. Sure, there’s still time, but historically I tend to think “I am totally going to play this season of Diablo!” and keep thinking that right up until the season’s over, when I start thinking “I’ll play next season.”

But if you in the audience really do want to enjoy hunting down goblins, Rossi wrote a nice guide.

Q4Liz: When you go to the beach, and starts to enter in the sea water, how do you do that process, like a KID or like a SQUID?

When I go to the beach, I like taking off my shoes and walking just close enough to the water for it to wash over my feet. Sometimes I’ll pick up shells while I walk. (Shells are pretty neato, and I have a huge glass jar of shells collected on the Texas coast.) Once I did this and left my shoes on the sand and a wave came up and nearly swept them away. That was entertaining. But I still had hands and feet and was probably not a squid when I ran to rescue them.

I really want to vote for bringing back the Li’itch queues, even if it’s only like once a month.

Liz: I’ve asked for Mitch’s help on this question because I do not understand everyone’s obsession with squids and kids. I know about Splatoon, but why is it all squids and kids everywhere lately? What do you want from me?

Mitch: I am 100% on board with Li’itch queues returning on a semi regular basis. We’re both a squid and we’re both a kid.

Liz: I still do not understand.

Liz: And that bit of insight is all I have for you today. And don’t panic, because tomorrow Mr. Matthew Rossi will be here to answer your questions. This is completely planned and there is no reason to panic. Got it? Got it.