The Queue: Madness takes its toll 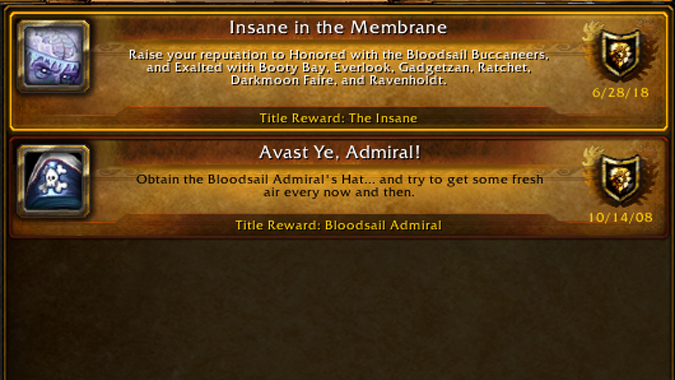 It’s been ten years. Actually, it’s been longer than that — the Avast Ye, Admiral! achievement was added to the game on October 14, 2008, but I beat down a lot of pirates and got a hat somewhere in Burning Crusade. However, I never got around to finishing off the Insane achievement, mostly because I didn’t think I had everything required for it. Last week, I finished polishing off Exalted with Ravenholdt — because I like green bars — and as I did, Insane in the Membrane popped up.

I don’t know if I’ll ever use the title, but I appreciate the sentiment regardless. Let’s get to your questions!

Are racial profession bonuses actually worthwhile? Trying to decide if I should switch my draenei Death Knight from blacksmithing to jewelcrafting, or if I should just have my void elf learn it instead.

Not especially. Bonuses for gathering professions might reduce cast time a little for picking up things, but with the others, it’s just a flat numeric bonus to your skill level. I mean, if you’re really into professions maybe that could be a determining factor as far as profession choice goes, but I don’t really think about it on my characters at all.

Q4tQ: What does a faction war “resolution” look like to you? BFA’s introduction implied that we’d get one, and if they’re going to lean into said war as a core theme, despite what happens after or in parallel throughout BFA, we ideally don’t make out of this wartime expansion story arc without a “resolution.” Indeed with the weight of the red/blue feud for this expansion, proper rules of a satisfactory story further the agenda that a “resolution” is the least we can expect.

Not going to insert my opinion this time, I’m quite interested in what this means in lore and perhaps even in game mechanics to the queueniverse.

I’d like to see the faction divide disappear. But I think that’s probably just me, and a few others who are tired of the whole faction war angle that’s been going on for fourteen years of game now. From a play-the-game standpoint, it’d be sort of nice if I could play with whatever friends I wanted, regardless of whether they rolled Horde or Alliance, you know?

Beyond that, I just sort of feel like Anduin, of all rulers, would be really willing to work on peace and give it a shot. It blew up in his face in Before the Storm, but without going into too many details, that was more of a factor of who he was dealing with than his attempt. If someone like Baine eventually led the Horde? Peace would suddenly be a much more likely possibility.

WE INTERRUPT YOUR REGULAR QUEUE QUESTIONS TO ANSWER THIS ONE FROM LOTHARFOX:

Season 2 of Anne with an E starts on Netflix this Friday. I haven’t watched any of it. Is that about our Anne? Was she named after Anne of Green Gables?

Not to my knowledge — my mother got Anne from a great-aunt of mine, spelling and all. Said great-aunt might’ve been named after Anne of Green Gables, but she was gone long before I was born, so I don’t really have a way to ask her.

But hey, the series on Netflix is excellent. It’s a bit different than the books I remember reading as a kid, a little darker, but still pretty good. And the opening credit sequence is absolutely beautiful.

Q4tQ, I’m leveling a Nightborne in Pandaria right now and is enjoying the beautiful enviroment. Which expansion has the best looking zones?

Right now, for me the answer is still Pandaria. I tell you what, Battle for Azeroth is really giving it a run for its money, though. I love green places with lots of plants, and Zandalar has two zones that are absolutely dripping with greenery. There were parts of Draenor I really liked too — the areas with the Botani were gorgeous — and I really love the scenery in Val’sharah, but Pandaria is still at the top spot for me. For now, anyway!

Q4tQ: Since Anduin’s lack of an heir was mentioned several times during ‘Before the Storm’; who will the new king end up with?

I think a lot of the reason it was brought up is because it’s the biggest thing on Greymane’s mind at the moment. Genn is old. He’s not really a backup leader, or a successor, and the Alliance is headed into war. Greymane saw what happened to Varian first-hand, so the thought of kings dying is pretty up there in the forefront of his mind right now, I think. The question of an heir is one that he thinks is really important, especially now.

As for Anduin, he’s got better things to think about. I’m sure he’ll get married eventually, but it’s not the most important thing on his mind right now. Maybe that’s a mistake, but the kid’s still young, his dad just died, the world is trying to recover from a horrific war against a crazy-evil enemy, and another war is already knocking on his doorstep. Falling in love, getting married, having a child — all of these things just kind of pale in comparison to, you know, getting a foothold on running the kingdom.

There aren’t exactly a lot of prospects out there, either. Most of the nobles we know of are from an age before Anduin was born. Doesn’t mean he couldn’t pick one of them — Genn politely broached the idea of Tess, for example — but Anduin’s not really interested in pursuing anything with anyone right now. I feel like we might find some more likely prospects in Kul Tiras — the place is chock full of noble houses, after all — but we’ll have to wait and see how that pans out.

Q4TQ: I’m on beta and do u think they will increase the amount Of experience to level in BFA?, my priest just hit 113 and I’m still in storm song valley ps war mode is turned off!

They might adjust it, but keep in mind the level cap is 120, not 115. You’ve still got a ways to go before you hit max level, and there are only three zones per continent. The zones are gigantic. You’re going to get a lot of XP in all three of them. You’re probably going to see three to four levels worth of XP per zone, if not a little more than that when you factor dungeons into the mix.

It feels pretty good to me, balance wise — you’re steadily earning XP, not too much of it, but enough that it feels like you’re constantly making progress. I don’t really see them having to tweak the leveling curve before the game is released, but hey — I’m not a developer!