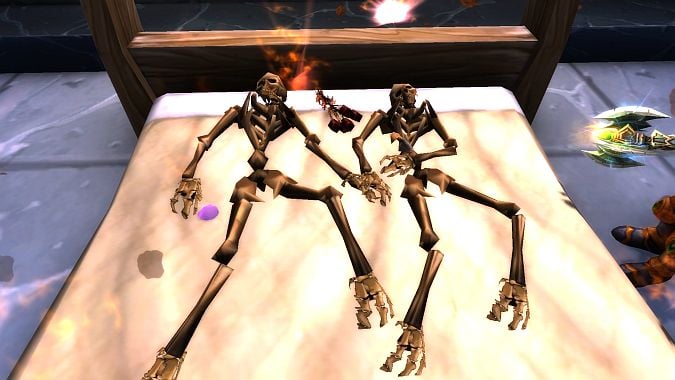 I’ve been listening to a random mix of the Punk Goes Pop albums because they take me back to teenage Mitch, pop-punk music, and crowds of goths at the Warped Tour. But something bothers me about the title… Yes, punk (or, “punk”) bands are covering pop songs, but the songs themselves are punk style. If it were punk bands doing pop versions of pop songs, or if it were punk songs made to sound pop-y, I could see the title making sense. Right now, though? It doesn’t make enough sense if you really think about it.

…But then, millennials literally screaming Taylor Swift songs is probably not meant to be thought about. Anyhow, here’s The Queue.

Q4theMitch: Hey Mitch, [it was] my birthday [yesterday]. Am I entitled to a queue question? Yes? Thanks!

If it ever comes down to a showdown between our dark lady Sylvanas and void-mommy Alleria, who will you be rooting for and why?

I know you posted this yesterday, making this a day late but… HAPPY BIRTHDAY!!!! July birthdays FTW. Also, yes, you get not only a question, but the first question! Or two, I guess (technically).

This is actually something I’ve thought about before because, frankly, I like both of them a whole h*ckin’ lot. I never want to betray the Dark Lady, but I also wouldn’t want to root for Bae’s loss, either. When I think of Alleria, though, I almost immediately jump to “package-deal” Turalyon, who I like a lot less*. This would put Sylvanas ahead of Alleria — but it’s not really fair to judge Alleria based on her male counterpart. So let’s pretend Alleria ditches Turalyon or he dies or something. He’s gone. Out of the picture.

This then gets me thinking a couple of things: Should I judge this based on what I think could happen as a result of one gaining prominence in-game? Alleria bringing Shadow Priests and the Void to the forefront would be excellent. Should I judge it based purely on what I think would take the story in a more interesting direction? Sylvanas’ continued defiance of death and the recent realization that the Void fears her so much is incredibly fascinating and ripe for lots of storytelling. What about a mix of the two? In that case, there is the chance for Void prominence and a (different) direction to take the story, wherein the Forsaken have to deal with the loss of someone so thoroughly involved in everything they do.

Objectively, then, I think Alleria winning a showdown leaves room for more overall potential, both gameplay- and story-wise. But subjectively, I can’t turn my back on Sylvanas. In a “who’s your favorite?” competition, she wins.

*Turalyon is an objectively interesting character, and watching the core of his beliefs so thoroughly shaken was wonderful story drama. He’s just not my favorite type of hero in general.

Q4tMitch: I heard Sylvanas proposed to you, when is the wedding? Did you pick out your dress yet? How is Nathanos taking the news? What will be your first decree as Mitch king?

The wedding is October 31st, on whatever year a blood moon rises (please be careful, Link!) Nathanos just keeps smirking like there’s something more going on beneath the surface, but maybe it’s just a nervous tick. I choose not to read or look into it at all!

No outfit picked out yet. I like to live on the edge, so I’m gonna have a couple dresses/tuxedos/birthday suits picked out and see which one I’m feeling most on the day of the wedding. First decree? Every zone in Azeroth must have at least 1/4 of the architecture in the style of the Forsaken. That stuff is awesome and needs an excuse to have people build more types of buildings using that style.

GALDWYNN, I WISH I HAD A BETTER ANSWER:

Blizzard seems to be one of the better companies at handling problems and putting out a quality finished product, but some times I feel like we hold video games to a lower standard than other forms of entertainment. If I went to a movie theater and they lost power halfway through the movie, or the movie didn’t play right, I would expect some sort of reimbursement.
But we only grumble about servers being down on launch day or a bugged bottleneck quest that keeps us from progressing.

Blizzard has gotten a lot better about this sort of thing over the years, and launches have only improved in stability. Not only are their server techs more adept at handling this, they’ve gotten smarter about not clumping players together. That said, they’re doing a global launch this time. It should theoretically work fine (since the whole world doesn’t operate off of the same servers), but it’s still a new thing and could come with its own issues.

What might legitimately be different this time around (for NA players) are in-game bugs, rather than DDOS attacks or connection issues. Previous expansions have had the EU servers go live earlier and, well, they iron out the bugs for NA folks. If there’s a bug, everyone’s going to experience it at once, report it a bunch, and then see how fast Blizzard handles it. Should be interesting!

TECHNOSKALD, HAVE YOU HEARD ABOUT THE CRACK IN THE SKY?

During this (happily short) lull, are folks playing other games? I see mention of playing Guild Wars and whatnot, and of course Diablo – anything else people recommend? Preferably something that can be picked up and dropped from time to time rather than turn into a long-term thing like WoW.

Basically, a summer romance rather than a long-term relationship.

I mentioned last week, but I’ve been playing Fortnite in my free time lately. Granted, that’s very minimal free time, but that’s also part of why I’ve been drawn to it. Matches are usually quick, but there are still challenges to complete that can make even a 2-minute death feel worthwhile. Also, the hype for Season 5 is a ton of fun so far!

MOVEWOW HAS A WONDERFUL QUESTION!

Q4TQ: With the new World PvP toggle coming in BfA would you like to see other toggles introduced into WoW? I would like to see a toggle for darker nights. I love the affect of the Inky Black potion from the Darkmoon Faire!

Toggling nights would be pretty interesting, and totally doable. Hell, I’d love it if we could set the time of day manually — a couple games offer this via a screenshot mode, and it’s wonderful. Other toggles, though? Y’know, I’m totally blanking on this. Commenters, help me out!

I still haven’t done the purple bird raid, is there still time to do it on those friendly-carry sites?

Yes, there is! And after some research, I realized that it is NOT going away with the pre-patch. Ahead of the Curve is, but the Spellwing will be available until Battle for Azeroth goes live. The only places I know of to coordinate runs are Friendship Birb and Perky Pugs. Granted, there are a ton of folks in the BW community who may or may not be able to coordinate that sort of thing over on Discord.

SPOONYBARDOL, I TESTED THIS JUST FOR YOU:

Regarding the Chromie scenario, has anyone tried it in the BfA beta? Does it still give you an item level of 1000, or is it squished?

So, I hopped on the beta to try this. It squishes (or raises) your item level to 250. Interestingly, my main character (who is 960-something on live) is 248 on beta, while my level-119 character is 249. So the current buff to item level 1,000 seems higher than a 112 would normally have. Granted, this doesn’t make a difference to difficulty, but it’s kinda funny to see that Blizzard over-estimated how strong a 112 would be. Or, y’know, they just picked a nice easy number to work with.

Also interestingly, my 119 (who is a pre-made) got the “Chromie” quest from Khadgar, but Chromie did not offer me any Deaths of Chromie quests on that toon.

2BE: Basic Campire vs Target Dummy