The Queue: In which I may have a jaunty hat 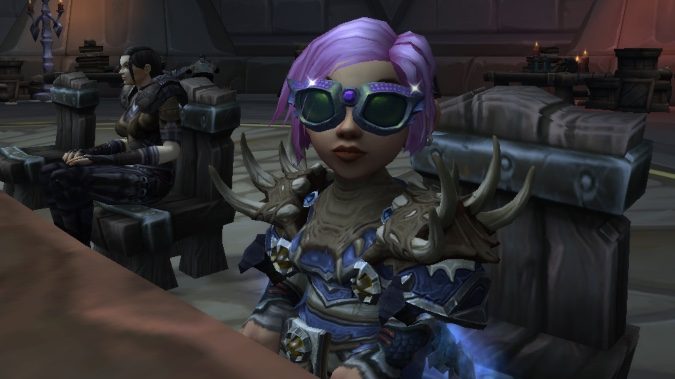 Okay. I don’t really wear hats in game because they crop in weird ways with my hair and inevitably look stupid. (Also Gnomes are super cute and why would you want to hide that with some bulky helmet?) So, really, this is a metaphorical jaunty hat. (Just don’t ask what it’s a metaphor for, because I really have no idea.)

Got it? Good. Let’s get to the Queue.

So I have a Q4Liz, but I’m afraid Mitch will steal it. But what if Liz actually handles tomorrow’s queue? UGH

I have a secret to tell you, but it’s just between us, okay? Okay.

You’ve probably noticed that Mitch and I don’t always get along. That Mitch and I can be very grumbly with one another. But in reality, we get along most of the time. (Except when I’m grumpy, at which point I’m really just grumpy with everyone.) And sometimes — sometimes — he will send me a list of Queue questions that he has not used for the day. Including this one!

Q4TQ: Now that Legion is almost over, how do we feel about Addie Fizzlebog? Do we feel she was too much of a gnome cliche, or was she a strong character, or ?

Was this your question? I found this question, and it does seem like a “me” kind of question, so I’m going to answer it and hope for the best here.

I adore Addie, and really didn’t feel like she was exactly a stereotype. She was a writer, which, while sort of fitting the nerdy Gnome aesthetic, is not the gadget-obsessed engineer I typically associate with Gnomes. What was interesting about her was her fierce determination to become a Hunter, a profession Gnomes have never been considered for. (And, really, it was perfect for the expansion that added Gnome Hunters as an option for all of it.) She worked hard to become one of the game’s first Gnome Hunters. I loved seeing her chase a dream that’s been impossible for over a decade of game time and succeed.

But beyond that one quest chain (and her presence in the Hunter class hall, I think), there’s not much to Addie’s story. I’d hope to see how she’s doing in the future.

Q4tQ: Are Gnome enthusiast’s hopes for more and better Gnome stories an unrealistic pipe dream? Gnomes are the underdogs of Azeroth, which is part of the reason I love them. They persist in a world that is seemingly way too big for them with a (mostly) positive attitude. Blizzard ignoring Gnomes kind of makes me love Gnomes even more. Is it possible Blizzard realizes this and passes them over on purpose?

As Eno pointed out, I had to answer this question because it is definitely a Liz question. But at the same time … I just don’t have a good answer. I hope Blizzard has some cool Gnome stories to tell, and I’m glad that Mekkatorque had a super awesome moment in the Legion trailer (even if we never saw him again). There are stories to tell, and that gives me hope that Blizzard may tell them.

But at the same time, both Goblins and Gnomes are often comic relief, which prevents serious storytelling. Will things always be this way? Maybe. Maybe not. I don’t have a crystal ball, and my Magic 8-ball is stuck on “ask again later.”

We had a pretty cool Hearthstone animation a couple months ago (the second part of that super-disney story with the little girl in the tavern), and we got no news on that.

As of right now, no news on the new Hearthstone expansion either (also with a trailer, starring Dave Kosak).

I guess you guys just don’t get a lot of traffic for Hearthstone stuff?

Okay, let me put on my business hat and we’ll talk about this.

There are a few factors at play here. The first one is that we don’t always get to the news first, or really try to. There are tons of sites out there that put up news super fast and we really never win that game. So instead of trying to be first, we usually try to add something to the news. As is obvious well after the fact, we posted about it much later in the day.  (I don’t know that I really added a lot to it, and I’m pretty sure that I screwed up at least one fact, but I spent at least a half hour taking screencaps of Dave Kosak acting goofy. That’s tough work, okay.)

Next… we don’t have a lot of people who play much Hearthstone. There’s me and then there’s Ted and Matticus, both of whom have day jobs and aren’t typically around to write news. In the perfect world, all of us would know every game well enough to write about it intelligently, but we do not live in this perfect world. The fact that we don’t aim to be first and want to add more than just “read Blizzard’s blog post” to an item means that sometimes it will sit around until someone who knows the subject better is around to write it.

And then, because of limited resources, sometimes we just don’t cover every bit of news. Like the Disney-esque Hearthstone trailer. When news (or potential news) comes up, there are a few questions we ask ourselves. Is it interesting? For example, we’ve stopped posting a lot of WoW hotfixes, because so many of them weren’t interesting. We didn’t find them interesting, which meant our writing didn’t carry any enthusiasm, so those posts were usually “go read the hotfix notes” without much commentary. They didn’t get readers, and I can’t blame people because they were usually boring. These days, we post hotfixes if there’s something interesting to talk about, but otherwise we leave them be. So sometimes news that doesn’t have a big wow factor or we don’t have anything to say about … just doesn’t get posted. I think the video in question fell into that category. It was cute, but what was there to say about it? I’m not sure. We made some jokes about it in Discord, and if we posted about it, it probably wouldn’t have been longer than a sentence or two. Maybe we should have posted it anyway. I don’t know. It’s a judgement call. I didn’t ask anyone to write it and no one said “I really want to write this.”

Actually, I think a more noteworthy “missed the boat” Hearthstone news item was the recent patch (and pre-patch announcement) that changed some minion types — namely, several giants are now elementals. That could have an interesting impact on decks, and maybe make some elemental decks stronger. But I felt it was a little too niche for our readers and we just didn’t write it. It could have been interesting to do something like “try these decks with the new minion changes,” but we didn’t get to it. Now the changes are live and the expansion’s been announced and it just feels like old news.

And you may be surprised to know that Hearthstone is one of the more popular games on the site, though enthusiasm spikes around expansions and tapers off as the expansion continues, when there’s less news. (World of Warcraft is #1, Diablo is strangely #2 and I’m considering implementing a new rule in which every headline must include the word “Diablo” whether it’s about Diablo or not. Hearthstone and Overwatch typically wrestle for #3, but if there’s a skins gallery, Overwatch or Heroes of the Storm will rocket up to the top of the list because everyone loves skins.) We’re toying with new and different Hearthstone content to see what people are interested in reading. Right now Matticus is working on a roundup of decks from the HCT summer championship (which he promised me a week ago but swears he’ll have done today). That’ll go out whenever he finishes it.

Okay. Business hat off. Back to the Queue.

Q4tQ: if I claim it is my birthday will I automatically get a question answered?

And that is all for today my fine feathered (and non-feathered) friends. I’ll see you back here next week.