The Queue: I prefer carriages to pumpkins 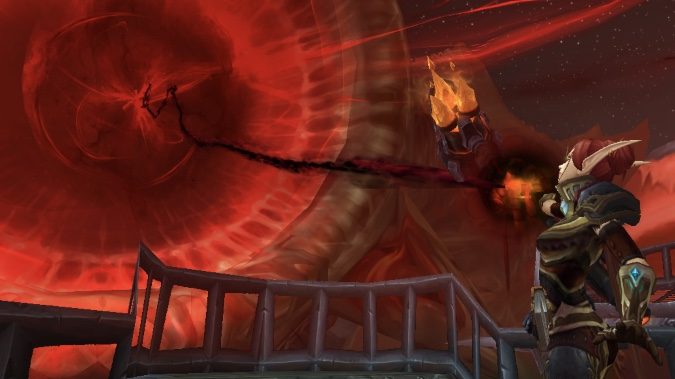 But come tomorrow, it’s pumpkins we shall have. So let’s enjoy our final day with our carriage/artifact while we can… and, oh, I guess we can do the Queue, too.

Speaking of pumpkins, has anyone heard any confirmation from Blizz about whether they are nerfing the gold missions from the class hall table? (Or beta confirmation i suppose)(guess I could check beta later if I remember :p )

I can see a case for not nerfing it, actually. The garrison was absurd on that front, as it generated the resources necessary to send out the missions for gold; it was a self-perpetuating machine once you got it all set up. The order hall missions, by contrast, would still require you to go out and farm OH resources. And as there are still other reasons to do Legion WQs (paragon box mounts, unlocking at least one artifact tint), it seems kind of harmless. Players’ interest in doing old WQs for OHR just to send out gold missions will likely wane naturally anyway.

Whenever we’ve had easy gold-making tasks, Blizzard has nerfed them pre-expansion. On the beta, gold rewards are cut in half. I’m also pretty sure they’re nerfing World Quest gold (via your companion) though I can’t find a source for that.

So expect gold nerfs to go live on Tuesday with everything else… and if they don’t, we can all just be pleasantly surprised.

Q4tQ: I was looking at my screenshots from the Silithus artifact-overloading cinematic, and I realized something: nobody there is wielding Xal’atath (unless it’s, y’know, you). I’ve only done it Alliance-side, but has anyone seen it on the Horde side?

I’m curious, because I was listening to some old Lore Watch episodes today – 53 and 66, which deal a lot with Old God stuff. And in ep. 66, which goes on a lot about Ogmot the Mad and his journal, some of which kind of suggests that he might have Xal’atath or at least seen it. This got me thinking that, if the devs have plans for the dagger to show up again, it would be a pretty sneaky thing to deliberately not show it in the “artifacts go boom” cinematic. Thoughts?

We actually had a really long conversation about this in Discord after the Silithus quest came out. Only a handful of classes/characters are ever represented in the cinematic, and they’re different (ish, since Darion Mograine shows up on both sides) for each faction. If your class overlaps with one of the “regulars,” they’re swapped for someone else. (I.e. usually there’s a Brewmaster Monk, but when my Mistweaver did it, he wasn’t there.)

That’s a roundabout way of saying tons of Artifacts aren’t represented in the cinematic, and I don’t think it’s suggestive of anything.

We’ll still be able to use our artifacts as ilvl-whatever weapons though, right? They’re being stripped of AP powers and perks, but they’re still stat sticks?

As others have said, yes. They’re now pumpkins you smash over people’s heads to DPS. Or tank. Or heal. (I’m not sure how that last one works. Maybe the nutritional value of pumpkin is higher than I think.)

Is there a pumpkin weapon tmog available to go with this new representation of our weapons? I’ll sport that on a couple characters.

You have to provide your own pumpkin. I have a sticker I’m going to put on my monitor. I’m sure that will work just fine.

Talking about Buffy below reminded me of the musical episode. That brings me to the question, what is your favorite musical? Movie, play, or TV show.

Okay, anyone who reads my Queues know there’s an obvious answer here, but I’m going to say that I really enjoyed the Groundhog Day musical. (Yes, it’s also a musical! And it’s bizarre and irreverent and sad and somehow also full of hope.) It’s one I’d love to see, but it don’t think it got the success on Broadway to send it touring.

And, yes, I’m apparently jumping from one goofy question to another. It’s Monday, so I’m not sure you can practically expect anything better.

Yep! They’re doing two 12 hour streams soon: Horde on July 21 and Alliance on July 28, both noon to midnight eastern. Remember, there’s no ilevel requirement (though you have to unlock Argus to physically get to Antorus), so you can take any crummy 110 you have whether it’s Horde or Alliance. Check their website for full instructions.

With Xal’atath being retired, there is a sudden shortage of weapons forged from Old God remains. Does Mitch happen to be an organ donor?

And that’s all for now, my lovely Queue-friends. I hope I haven’t confused you too badly by showing up on a Monday. You’ll be seeing Mitch in this space tomorrow and I’ll be back as usual on Wednesday. Until then!