The Queue: Evil twins and other oddities 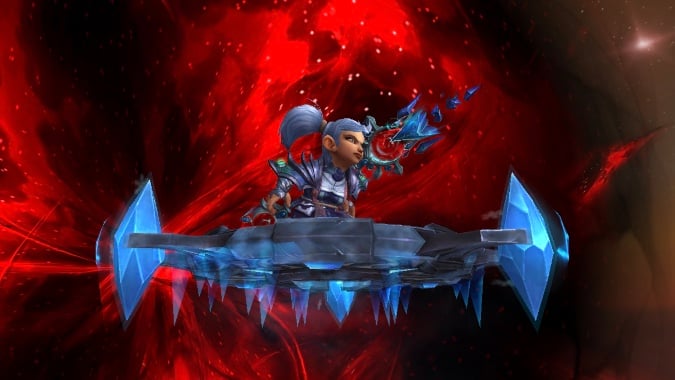 Come on. Do my headlines really need a reason?

It’s the day after patch day. Let’s do this.

Q4tLiz: what’s the likelihood of Gnomes fiddlin’ with reversing the curse of flesh via technology, and BAM allied race earthen, iron dorfs, mechagnomes.

BonusQ4tLiz: When will engineering return to it’s roots as the ‘trinket’ profession? Gnomish poultryizer, shrink ray, death ray, etc. All need to make a comeback with modern numbers attached to them. No engineering skill required (although engineers using these trinkets will enjoy half the normal chance of a backfire), so that we can sell something on the AH.

BonusBonusQ4tLiz: ( IT’S A TRIPLE!) which of these two dogs is cuter?

Wow. That’s a lot of questions in one question. Let’s see…

Question #1: Gnomes are crazy inventive. It’s kind of their superpower. But we’ve seen so little of Gnomes doing anything in the game that suddenly finding out they’ve essentially reverse-engineered the curse of flesh would be awfully out of the blue. And Blizzard hasn’t shown much interest in telling Gnome stories at all, much less stories that show them as interesting, fully fleshed-out characters rather than comic relief. Are Gnomes capable of doing something like this? Possibly. Are we going to see them do it? My bet’s on no. I’m really not holding my breath for any kind of Gnome story any time in the future.

Question #2: I just don’t understand engineering these days. What are you supposed to do with it? My rogue is an engineer and basically just makes goblin gliders and goggles for transmog. It used to be a goofy sort of profession, but I just don’t know what it is anymore. I am with you about bringing some usefulness to engineering. Another thing that would be fun: scaling trinkets, or at least regular updates to them. Why can’t I still walk around with a fierce mechanical battle chicken at my side? It’s tragic.

This guy will be test driving specs. Specifically, shadow and (all three) warlock. I know I’m gonna main one of these 4 in BfA… 8.0 is gonna be all about determining which one.

I logged in, stared at my talents, alt-tabbed to read/re-read about all the changes, and logged out without making any concrete decisions. (But my Gnome is sticking with Mistweaver and my Paladin is sticking with Holy… I just need to figure out the ins and outs of their new skills and talents.)

Why are the other bags smaller then the backpack? Who designs something that bad? Are people who click on the back icons to open a specific bag…

Back in the early (i.e. Vanilla) days, it was kind of exciting to get a new bag. You started out with so little inventory space and large bags just weren’t easily available. Hunters had to carry arrows/bullets and pet food. Warlocks had to carry soul shards (which didn’t stack at all). Inventory management was a somewhat annoying meta-game that you would conquer by acquiring bigger bags. I can tell you my warlock was crazy excited to be able to craft myself a 28-slot soul shard bag, which required drops from the (then still quite challenging) Molten Core. It meant I could carry 28 soul shards in just one bag! It was amazing!

But today? Inventory management isn’t nearly as much of a meta game. We don’t have to carry as much stuff, and bag sizes aren’t actually getting bigger. There’s no more excitement to getting a new bag.

That, I think, makes separate bags feel archaic. Sure, you may swap out bags from time to time, but you rarely want to open one bag at a time. (Though apparently some of you Queuevians do. Weirdos. Why are you complicating your lives?!) This annoyance is why “one bag” addons exist, and despite Blizzard’s tendency to incorporate popular addons into the game, this feature has remained an addon. It’s a relic of early days of inventory management that’s just never gone away.

Q4TQ: Now that we can alter our characters skin color at the Barber Shop (As told by 8.0 patch notes) is their any reason to pay $15 for an Appearance Change? Or am I missing something here? Hair style, face, hair color, special features, and even skin color can all be done with gold. Is there a point to the Appearance Change anymore?

Pretty sure it’s just gender at this point. For $15.

Q4TQ: Is it OR is it not true that Matt Morhaime took out First Aid so that he could crash the cost of wool fabric on the auction house, then buy up all the wool himself, then in the next expansion put First Aid BACK into the game BUT take sheep out and become the Wool Barron Of The All Realm?!?! Is it?!?!

I assume Matt Morhaime is Mike Morhaime’s evil twin, in which case he definitely bribed and blackmailed his way into getting first aid removed so he could crash the value of fabric. And he’s not sorry about it at all.

Q4TQ: Does BlizzardWatch plan to create/support an official BW in-game community now that they are live?

We’ve talked about it, but I don’t have a definitive answer for you. We used to have a guild, and of course there have been reader-run guilds, and while a community would absolutely be more practical for us (no one would need to roll new characters, for one), it would still take some effort to maintain them. I’m not sure how much effort it would be, but time we would spend managing a community is time we wouldn’t spend writing posts.

Then there’s the matter that sometimes you just want to keep your gaming time for you. I love you guys, but I don’t necessarily want everyone to always know when I’m online and what I’m up to and have an immediate line to contact me. (I don’t mean to be rude, and sometimes I do this with my guild, too: going off and playing an unguilded alt just for the peace and quiet of it. Sometimes you just don’t want to deal with people.) And I know some of the staff feel the same way, wanting to keep their gaming time to themselves.

So I know what communities do on paper, but I need to see more of them in action to find out whether they’d be an effort to maintain or be intrusive when we sometimes just want to play on our own.

Q4TQ: What happened to all of my Valor Points?

I assume they’ll be back later. Blizzard pretends to get rid of them, storing them carefully in what I assume to be a beautifully lacquered puzzle box, made with exotic wood and lined with velvet. There, they rest until it is time for their return.

Even Blizzard, I think, expects Valor Points are gone forever each time they are put in their box. The box is placed on a high shelf in a locked room and forgotten about, but the Valor Points are still there, lurking in the darkness of their box, regaining their strength, and waiting for their chance.

One day, a developer looking for inspiration will wander through this room and see this beautiful box, out of place in dark storage room. They will pull it from the shelf and wipe the dust from it. Inside, the Valor Points smile… insomuch as Valor Points can smile.

We will never fully escape Valor Points. Your Valor Points will return to you when you least expect them, in the one place where you feel the safest.

Oh yes, they will be back. Valor Points are inescapable, and we are not yet free of them.

We may never be free of them.

Heed my predictions, Queue-friends, for the danger posed by Valor Points will never leave us. Be watchful and wary, my friends.