Battle for Azeroth releases August 14 (or August 13, depending on your region) and if you’re in it for the raiding, you won’t have to wait long to delve into Uldir. The date first appeared on the in-game calendar for the month of September, and was later officially announced by Blizzard. Specifically, Uldir will become available on September 4. 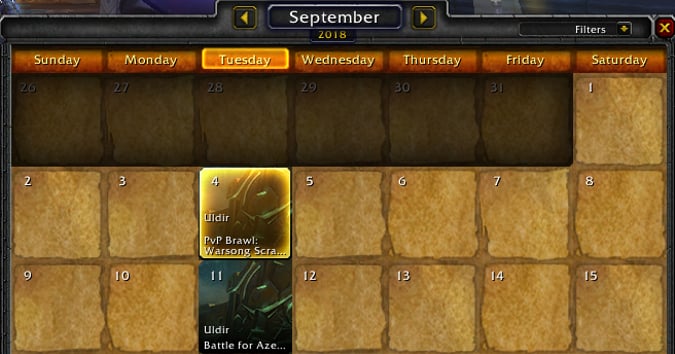 There is a caveat, however. On September 4, only the Normal and Heroic version of Uldir will be available. The full release schedule, as represented on the in-game calendar, is as follows:

Uldir is a (surprise!) Titan facility that has fallen to Old God corruption, located in Nazmir, one of the regions of Zandalar. The questing in and around Nazmir will tie directly to the events within Uldir, with all of its bloody goodness: Blood Trolls, Blood Gods, and generally just… a lot of blood. You can get some hints as to the story that unfolds inside via dataming from all the way back in March.

Once the Raid Finder starts to unlock, the bosses are spread across the three sections as such:

Wowhead has a stellar breakdown of all of these bosses, should you desire a preview.

Overall, these dates seem reasonable. September 4 is 3 weeks after the launch of Battle for Azeroth, which should be enough time for anyone interested in cutting-edge raiding to reach max level, even when you consider responsibilities like jobs or family. The LFR rollout is also not unreasonable for the first tier of raiding in an expansion; fully opening in 5 weeks is fast compared to some previous raids, but the first tier of raiding is usually rather straightforward. I wouldn’t be shocked to see full Mythic clears before LFR can even take a look-see at G’huun.

Granted, Uldir’s opening also happens to land right around the hustle-and-bustle of back-to-school for students. While unfortunate, take it from me, a guy who used to blow off his studies for raiding: don’t blow off your studies for raiding. It’s a terrible idea and leaves you ill-equipped to handle real life Blood Gods.

Blizzard Watch is made possible by people like you.
Please consider supporting our Patreon!
Filed Under: Battle For Azeroth, Uldir
Advertisement