The Queue: Hopefully one of us has a plan 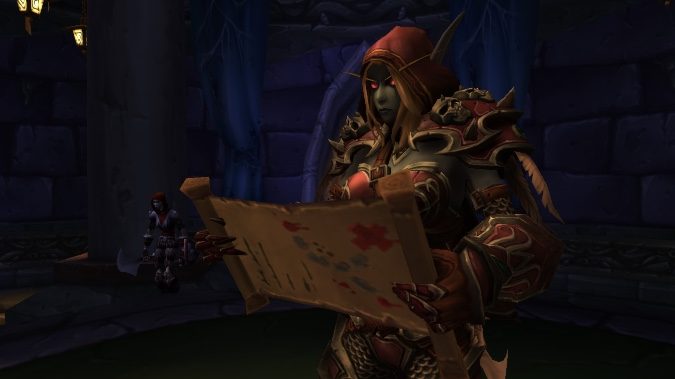 Today’s Queue talks about characters from Tuesday’s Battle for Lordaeron event. You won’t find any story details, but if you consider character names to be spoilers, you may want to keep on scrolling until you’ve had a chance to play through it yourself.

Q4SylvanasFans: what is it that makes you still like her even after she burns the tree and commits genocide? I’m genuinely curious. Do you find her actions justifiable, even if they cost the lives of thousands of innocents? Or do you just want to watch the world (tree) burn?

I’m really finding it hard to get into the Battle for Azeroth story. A lot of characters don’t feel quite like the characters I know, and the story has felt pretty predictable. I’m just not interested in it, on the Alliance side or the Horde side.

But there are characters I find interesting, and Sylvanas is one of them. She’s a complicated person who’s been a mainstay of the Warcraft universe for some time. I want to see just what she’s up to (and I’m hoping she’s not just going to be Garrosh 2.0). It has nothing to do with approving or disapproving of her actions: I just think she’s a compelling character.

I’ve seen a lot of people equating enjoyment of Sylvanas as a character with approval for her actions — or, worse, assuming that since Sylvanas is doing evil things anyone who likes her character must fully approve of her actions and they themselves are also evil.

There are lots of stories with compelling villains. I didn’t enjoy Silence of the Lambs or Hannibal because I’m a supporter of cannibalism. I love the suspense of Psycho, but I am almost certainly not planning to kill anyone with a butcher knife. (Trust me on that.) I watch Thor movies more for Loki than for Thor, but it’s not because I want to be buddies with Loki — it’s because the character has a lot of depth (in the Marvel movies, usually more depth than Thor). There’s the Master in Doctor Who, Khan in Star Trek, Darth Vader (or Tarkin or Phasma or Thrawn or even Kylo Ren) in Star Wars.

Villains can have compelling, emotional stories. We can enjoy watching them, even as they do terrible things. A good villain is a foil that challenges our heroes and forces them to be their best. We may hate them, but sometimes we love to hate them.

My greatest worry about the Sylvanas storyline isn’t that she’s going to do something awful: it’s that Blizzard will make her evil just to be evil. That Sylvanas won’t be a compelling villain, but a boring one. I’m holding on to hope that there’s something more interesting than what we’ve seen so far.

Spoilerish Q4TQ: Do you think Sylvie has a whole book of planned assassination scenarios for the Alliance leadership? And do they all involve capital cities, or does she maybe have one cooked up for, say, Westfall, too?

Sylvanas is a planner. She probably doesn’t keep a diary of murder plans in a journal next to her bed (probably). But she certainly keeps an account of everyone’s strengths and weaknesses so she’s ready to strike. Sometimes that’s with an arrow and sometimes that’s with some well-placed words… but knowing the best approach for her enemies (and sometimes her friends) is how she gets what she wants.

I’m probably taking this question more seriously than you intended, but yes, I think Sylvanas does have a plan. I doubt it’s anything so complicated as to require individuals being at specific places at specific times, but we don’t know because she’s not going to share them. (Unless you find the murder journal that she totally doesn’t keep beside her bed.)

And, as in the last question, I hope Sylvanas has something more interesting in mind than just flitting from place to place doing bad things for no apparent reason. If she doesn’t, this is going to be a long, tedious expansion.

Q4TQ: Are there any free Boomsday Project packs?

You’ll snag three packs plus a random legendary minion (or the Dr. Boom hero card) just for logging on. So log on! Do it! Even if you don’t play Hearthstone a lot, you have a few extra cards when you do.

I was going to wait to see cutscenes when I played tonight, but I broke down and watched them. So, Jaina is goddess-level powerful now? Can I join the church that worships her, so I’m on the victorious side of history?

I think we should start our own. Right here, right now. First Church of Jaina Proudmoore, services every day at noon central. Who’s joining us?

Unfortunately, my pups aren’t very into balls. Isabel is all about plush toys (preferably those that issue hideous squeaking noises), and Abby likes to pretend that she’s far too mature to be interested in something as childish as a toy. Yeah, my dogs are real killjoys sometimes.

Anyone else hoping it’s Pooh Bear of all people to strike Sylvanas down!
He just marches up to her decked out in Paladin gear. “Oh bother, someone needs to protect young Christopher Robin from that evil witch”
(he’s mistaken Anduin for Christopher, everyone is just rolling with it).

You have my sword.

Well, actually it’s a staff, or sometimes fist weapons, but whatever I’m wielding at the moment, I will follow our new leader straight to the pits of doom. Or to lunch, which seems the more likely place to visit. After all, we deserve a break after fighting the Legion. Let’s pause the faction war for a while and go have some tea (with plenty of hunny, of course).

2BE – Saurfang vs. Hogger, in the Stockades

This is a tough question, so I turned to the only person I felt could offer advice on such a weighty matter: Mitch. He informed me that “Saurfang would probably find a way to make it about honor and not take up arms, at which point Hogger would wreck him.”

Saurfang has definitely been dwelling on honor, and his own loss of it after helping Sylvanas. He’s already proven he’s willing to commit suicide by Alliance soldiers (aka an “honorable death”), but since they haven’t obliged him, maybe Hogger will do.

And that’s all for now, my friends. Remember that even as we all have strong opinions on the game’s story, we are all here to have fun playing it together. Don’t forget that there are real people behind those keyboards, whether they’re rooting for Jaina or Sylvanas, Tyrande or Saurfang.

So be kind to each other and enjoy the rest of the day.