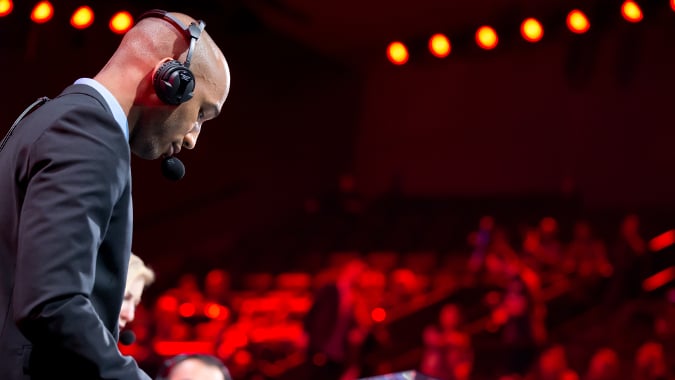 The HGC Western Clash is going on this weekend, and I got a chance to sit down to talk to caster Halorin for a quick interview before he takes the stage on Friday. We talked a bit about him, and then went into a deep dive of all the teams playing with a quick mock bracket. Don’t worry, Halorin fans — I started off by giving him a warning.

So, how’s California treating you and Rowboat?

Cali’s been amazing so far! It’s been a very interesting journey and a huge change in my life, obviously, moving across the country. I’m also working remotely full-time so it’s just a very different lifestyle.

Oh yeah, it’s a change of pace not getting to go into the office and get that social interaction with your coworkers. I’m sure casting helps a bit with social outreach, though.

Yeah, casting’s always been somewhat of a social outlet for me so that helps.

So what made you want to start casting in the first place?

It started out — and still very much is — a personal endeavor. Growing up I was always very introverted, and I wasn’t that talkative or outwardly expressive, so casting seemed like an instance where I’d be able to just honestly express myself and feel comfortable with the idea that I’m not always everyone’s cup of tea, but I’m being me. It’s not only helped me grow socially but I also feel like a better person for having gotten into casting, because it allows me to be more comfortable with myself and happy with who I am.

I think a lot of gamers can probably identify with wanting to feel less introverted. Do you have any advice for someone who’d like to break into casting, either as a hobby or a profession?

My biggest advice would be to just be yourself.

After the Clash, what’s up next for Halorin and Rowboat?

Just further acclimate myself to California life! For right now I’m just focused on doing the best job I can at the Clash. Not just for the audience, but also for myself, because it’s a huge achievement to think that I’ve committed to being myself, and that allowed me to get here.

At this point, I enlisted Halorin’s help. Even with careful analysis and planning, I stink at bracket challenges. Halorin cast the last two Heroes of the Dorm competitions, so he knows his way around a bracket. Even though the Western Clash is using a double-elimination bracket with a chance for teams that get knocked off to battle their way into contention, we did a single-elimination challenge for fun. 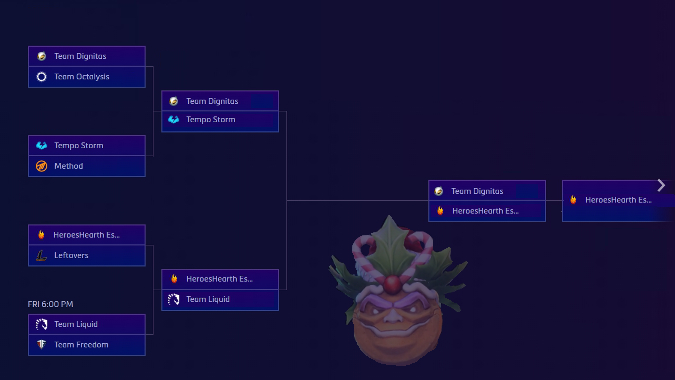 First up, Dignitas vs Octalysis. Dig definitely has the edge.

They’re effectively #2 in the world for a reason. They’re dominating EU so there’s no reason to believe that trend won’t continue. Octalysis has a ton of potential. I consider them the sleeping dragons of NA because they have experience on the world stage. They’re enjoying a new synergy with Drated but they’re having a return to old with players like Prismaticism getting involved, but they just haven’t gelled together yet. As exciting as it would be to have that come together facing Dignitas in the first match of the tournament I’m not sure that’s going to be the case.

Next up, Tempo vs Method. That’s a tough one.

It’s tough not only because both teams are skilled, but when you consider some of the intangible elements it’s difficult. Tempo Storm has gotten over the first hump of getting a new member of the team. ViN has done a solid job in becoming the latest member of that roster. There’s always going to be a transition period of sorts where, you’re used to going off of timing, and when a team’s been together for a certain amount of time they’re able to coordinate at a level that’s higher. So they’re a variable, and Method is a variable, because their draft style is very different from the rest of EU and you consider that it’s been a couple weeks leading up, it’s plenty of time to consider oddball strategies. I consider them the wild card.

In this matchup I tend to favor Tempo just because their core group of players has been so consistent, even though they’ve been swapping out players. They’ve settled into ViN, but that core’s been so solid. But like you said, Method could pull out the Murky. I’m terrible at the bracket, so who would you pick?

I’d have to give it to Tempo Storm, with the caveat that they have to play like they truly believe in themselves. It seems like, though they continue to play at a high level some of that swagger and confidence we’ve seen from their decisions hasn’t shown up yet.

Next up we have HeroesHearth vs Leftovers. I kinda feel like we can just put HeroesHearth in the winner’s bracket and move on.

Interestingly enough, the HeroesHearth match is one of the ones I’m most worried about. I feel like HeroesHearth is going to win that series, but a lot of people feel like HeroesHearth is the hope of NA. They’ve been the protagonists of the scene for over a year, since they formed in the Open division, so if they somehow lose the series to the four seed of EU, the mood and momentum of the entire region is going to be in jeopardy. So while I think they’re going to win, there’s that 1% chance something crazy happens.

That’s the thing with HGC. As soon as you think you know the answer…

The last Western Clash Zealots took Dignitas to a game seven and it came down to a single team fight, so nothing’s impossible.

For the purposes of the bracket, I think HeroesHearth gets it. Ok, Team Freedom vs Team Liquid.

This one I’d give to Team Liquid. I like to call them the Renaissance Team of EU. Normally when teams change roster there’s a dip in performance, but this is a team that pretty much skipped that. I think they’re going to come in with the intent to make a pretty big statement. Team Freedom is another of those we need to believe in ourselves kind of things.

I tend to be a little NA biased, but I’d still agree with that. They’ve been a little inconsistent in their performance, and they don’t always choose their fights wisely. Alright, so that means we’re on to Dignitas vs Tempo.

With Tempo Storm in the winner’s bracket, they may have gained enough confidence to take on a titan like Dignitas, and in a best of five they’d have more opportunities. I feel like Dignitas would win it. Tempo Storm is capable of winning, but they have to believe they can.

Dig is so mechanically precise and they’ve had so much time to come together as a unit, even with the swagger I’d give it to them too. So then we’ve got HeroesHearth vs Team Liquid.

I gotta give that to HeroesHearth. I could easily see that going to game 5, but for all the momentum Team Liquid has developed, they also feel like one of the more inconsistent teams here. Somehow, HeroesHearth always has this dynamic playstyle where they lose heroes early on but in these clutch moments they have scrappy team fights, and they look dominant from there. In a scramble, HeroesHearth would come out on top.

HeroesHearth has always played the macro game. They don’t care if they’re behind because they know they’re going to win. I feel like Liquid would struggle against that. So, for the finals! We’ve got Team Dignitas vs HeroesHearth.

I honestly feel like this is HeroesHearth’s time. If they make it that far, they’ll be able to take that series. It’ll go to 6 or 7, but I think they have what it takes.

I agree, but I’m a little nervous that I’m agreeing. It would be just the perfect ending to this whole story!

It’s probably just the beginning of their story.

The Western Clash kicks off at 11 a.m. CDT with Team Dignitas vs Team Octalysis on Twitch. Don’t forget to tune in for your free loot boxes! You’ve seen who Halorin and I would pick — who would you pick?