The Queue: I’m just saying this is a very large necklace 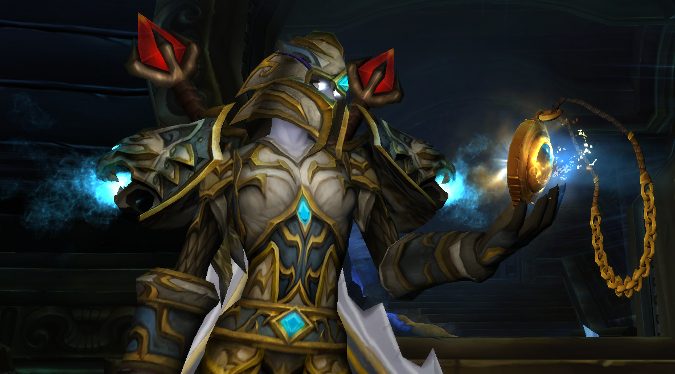 I’m sure it’s fine, I’ll just… cram it under my breastplate or something. No, no, that’s fine. I wouldn’t want Azeroth to think I don’t appreciate the gesture.

Hi all. I’m filling in for Liz today, and then she’s taking over Friday. I found out at my Doctor’s visit today that my blood may well be super-packed with red blood cells and I may need to actually go and get blood taken out of me on a regular basis to treat it. I sympathize with Azeroth is what I’m saying.

It’s the Queue. If you have questions, leave them in the comments please.

Q4tQ: So, has there been a discussion yet about how the Kul Tirans basically colonized the islands by genociding the Drust? Maybe I missed something, but from what I got out of the quests, it basically was “we found these islands inhabited by barbarians so we moved in and tried to kill them, and those horrible people fought back against us!”

Despite all the (legitimate) upset about Sylvanas, this is an area where the Alliance has put itself in a morally grey situation for sure. Supporting the Kul Tirans in this made me a wee bit uncomfortable.

You missed something. Quite a lot of something, in fact.

The Kul Tirans offered no violence to the Drust, who immediately began slaughtering them on first contact. This isn’t, say, the Orcs who came through the Dark Portal and immediately began murdering Humans, even especially unarmed ones. Now, you can certainly debate the morality of settling on an island (or islands, because Kul Tiras sure looks to me like it’s three close islands) which is already populated. But the Drust had zero interest in negotiation and they weren’t even attacked first — as soon as the people who would become Kul Tirans reached out to them, they were put to death. The Drust even gloried in the slaughter.

Plus, as far as we can tell, the Drust are… or at least were… Human. The scenes we see of Gorak Tul and his followers’ defeat on the stele near Arom’s Stand are of very Human appearing people, either Humans or closely related, could be an offshoot of the Vrykul affected by the Curse of Flesh. Many of their practices seem similar to Vrykul ones, including their use of runes.

Even certain Drust, such as the Thornspeakers, felt that the Drust under Gorak Tul were in the wrong, and the modern Thornspeakers are Kul Tiran Druids taught the secrets of Druid magic from Ulfar, a Drust Druid who believed that the decision to declare war on the new settlers without even discussing it was wrong, and that Gorak Tul’s magics were foul and corrupt. Considering it’s been thousands of years and Ulfar is still teaching Kul Tirans how to be Druids, he definitely kept to his convictions.

I mean, we even find out that when the Drust started losing the war, Gorak Tul started forcing their souls into wicker and rock golems so he could make them fight even after death and he basically used up all his own people rather than surrender.

But even so, even with the war over 2700 years ago and with the Drust clearly the ones who wanted to fight it, you’re right that the island was theirs first, and the Kul Tiran’s ancestors took it from them. You should be at least a little uncomfortable with that, I suppose. I mean, the Blood Elves (or at least their High Elf ancestors, including Kael’thas’ father Anasterian) took the land away from the Amani Trolls, the Humans helping them do it, and over 12,000 years ago the common Kaldorei ancestors of modern Kaldorei, Nightborne, Blood Elves and even Void Elves got together and took all of ancient Kalimdor that they wanted from the Trolls, to name just a few examples.

The Drust are actually a lot less ambiguous than a lot of those moments.

Q4tQ: any chance Blizzard will come up with some means of letting us pay war resources or something to pick that day’s emissary quest? In Legion, the emissary lottery got pretty old, as content patches added more reputations to the lottery. Especially when you find yourself waiting 13 days to get a Army of the Light emissary to unlock the shiny Draenei.

Is there a chance? Absolutely.

Is it a good chance? No.

Is it even remotely likely? No.

Will it happen? No.

But there’s a chance they’ll do that. There’s a chance they’ll just give us all Exalted with all factions right now! They could do lots of things that they are not in any way going to do, they have access to all those aspects of the game. They absolutely could sit down and come up with a way for us to pick which Emissary we get on a specific day.

They’re not going to do that, though, because they made it the way it is for a reason. They don’t want you to be able to choose which emissary you get every day.

I would say it’s not going to happen. But yes, they could do it, if they wanted to.

To my knowledge, no, there are none. Boralus and Freehold are big trading hubs and you’ll see some different races in Freehold — Vulpera, Hozen, Quillboar, Saurok, Tortollan, heck there are even Orcs in Freehold. Boralus does not seem to be so cosmopolitan but Taelia does say that traders from all over the world end up there, so who knows?

Still, I haven’t seen any Tol’vir.

CAZ(ZADUS)
Q4tQ: I’m 120 as of a day or so ago, and I’ve completed the story up to the point where I need to do a mythic dungeon, however I’m not even geared enough to queue for heroics. I’m at a complete loss as to how to gear up efficiently. Someone said spam normals, but I only get to play for a few hours per day in the middle of the night (I get off work at 2 am Central) and I’m DPS, so that’s maybe one dungeon a night with queue times. Is there something else I’m missing that I could be doing?

I found that the breakpoints were really painful that way — I didn’t start getting decent WQ gear until I’d gotten enough drops from Dungeon runs with friends and guildmates that I was already able to queue up for Heroic dungeons. Some suggestions —

Check the Auction House for cheap crafted ilevel 300 PVP gear. Sometimes people will put a less optimal stat selection (like Versatility/Mastery) up there for cheap. I understand we want our optimal stats, but the game doesn’t check whether or not the 300 item you’re wearing is well itemized or not and it can push you past a breakpoint.

Check to see if you’re honored with any factions. They all sell an ilevel 320 cloak you can buy and wear around for a while.

See if you left any quests undone. I got an ilevel 305 pair of boots when a green 290 Titanforged for me. It’s worth doing a lot of that stuff.

Otherwise, try not to get impatient. Better gear starts to trickle in once you’ve gotten a few drops.

Okay, that wraps up the Queue for today. I’ll see you all around, wearing this gigantic necklace.

Blizzard Watch is made possible by people like you.
Please consider supporting our Patreon!
Filed Under: Blood, Drust
Advertisement