The Queue: I’m a wreck, you’re a wreck 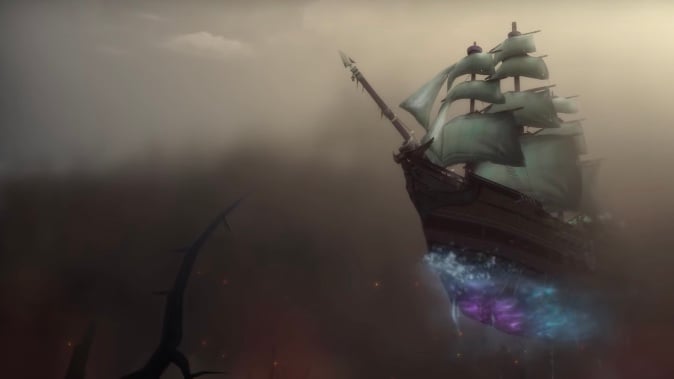 But Jaina proved that even the worst shipwrecks can turn into beautiful arcane death-dealing machines, and isn’t that what we all want in life? Of course it is.

Let’s fly on to the rest of the Queue.

Q4tQ: What happened to Jaina’s ship after she was arrested?

The only logical thing to do would be impound it. Not only is it owned by a criminal, the ship is Kul Tiran in the first place. (Sure, Jaina salvaged it from the bottom of the ocean, but I’m not sure the Kul Tirans would see that as rightfully taking ownership.) Taking the ship would simply be returning it to its rightful owners.

But it’s not hovering over Boralus. It’s not in the docks. It doesn’t seem to be anywhere. Is it back at the bottom of the ocean? Is that just the easiest way to park a shipwreck? Has Jaina put it into a bottle for safekeeping?

Since we all have limited experience with magical flying shipwrecks, it’s impossible to offer an informed opinion on the matter. Hopefully Jaina installed a security system, because it’s tough to find a reliable flying ship these days.

Vol’dun has a lot of side quests, so I skipped a lot of them, making it feel like the zone was mostly filler content. Am I just not noticing how everything is connected to the entire storyline or am I unto something here? :D

And Markus asked something similar about Alliance quests:

I’m working through Stormsong on my Alliance alt and the quests never ends. Are there too many quests in the BfA?

The fact that I got both of these questions within just a few minutes of each other reinforces my opinion that BfA has a bit of a questing problem. The main story quests are fantastic, spinning stories that a grand Azerothian hero (like us) should be a part of. But the main quest chain in each zone is a minority of the quests available. Once you’ve wrapped up the zone’s big story, you still have quests to do… and some of them are pretty filler-y. I haven’t played a Horde character to max level yet, and I’ve only done a little bit Alliance-side Vul’dun, but I can say both Stormsong and Tirisgarde have a mountain of side-quests. In Stormsong, you seem to visit every single farmhouse in the countryside, and all of them seem to have a half dozen quests for you. Just when you think you’re done, there’s a goat to milk or a bag of flour to collect. You can go for a very long time in Stormsong without doing anything terribly interesting. It turns into a blur of farmhouse errands that may never end.

I think there are a few issues that drive this tedium. First there’s the obvious fact that most of these quests aren’t that exciting. Kill rats? Murder a whole quillboar tribe? I did all of that back when I was level 20, and I’m ready for a little more these days. Killing rats doesn’t become a grand adventure just because they’re level 120. While every quest in the game is essentially busywork designed to keep you glued to the game, some of the BfA side quests feel like busywork.

A few bland busywork quests wouldn’t stand out. There are always quests like this. We’re playing an MMO, after all, and there’s no way around a bunch of “kill 10 <insert thing here>” or “gather 10 <insert thing here>” quests. But when you have a ton of these quests in a row, it stops feeling like a refreshing diversion more like a grind. Some zones really seem to send you from NPC to NPC, each with a list of chores for you. And when you finish their first chores, they often come up with new ones. (Predict to spend at least 20 minutes at every farmhouse in Stormsong.)

I don’t think there are too many quests, necessarily, but the cadence of questing feels odd. Some zones escort you quickly through the main quest chain and leave you with 2/3rds of a zone to play through, 10 rats at a time. Smaller clumps of side-quests and more side-quests that you run into naturally while playing through the main quest chain would make questing feel smoother.

Q4TQ: I’m seeing some people complaining about BfA being “more of the same”, and already feeling like they don’t have a lot to look forward to. I don’t necessarily agree, but it got me thinking: do you think WoW needs some sort of “big change” to spice things up again?

It’s been a while since we’ve had big shake-ups like the new talent system, or the ability to change specs at any time. Do you think Blizzard should introduce something huge, like a new spec for every class? Or the ability to “customize” your class (like turning your Warlock into a Necromancer, as that leak suggested)? Or anything else that makes you “re-learn” the game, in a way, if you want to?

WoW is a certain type of game, and to an extent that locks it into predictable patterns (like the aforementioned kill 10 rats quests). While the game has changed and grown since launch day, WoW is still WoW, and it will always be WoW.

From the beginning, WoW hasn’t tried to reinvent the wheel — it’s just tried to refine it. The devs look at systems in WoW and other games, then mimic and refine them into a better play experience. Whether you agree with their latest changes or not, change is an iterative process. I doubt we’ll ever see a truly huge rework to the game’s systems. (At least not all at once.)

On one hand, I’d love to see some new styles of gameplay. One of the things I find tedious about Allied Races is the fact that it’s just leveling a new character in the same old class. There’s nothing new there, except you’re leveling yet another alt for some reason. new specs or new ways to customize your class would totally do that.

But on the other hand I’m still trying to perfect my 8.0 Mistweaver play. I need to master this before we start over with something new.

How do you know if you’re out of balance playing too much WoW and need to step back?

There are two things to look at when you’re puzzling at game/life balance. First: are you ignoring other important things to play? I’m sure most of us let real life things slide around launch day when we were eager to see new content, but real life can’t be ignored forever. If you’re consistently missing work or school or family responsibilities to game, it’s probably time to re-evaluate how you’re spending your time. (After all, we need to hold down jobs to pay for internet access and subscription fees.) Unfortunately, it’s tough to recognize when you’ve hit that place… sometimes you only realize you’ve been spending too much time gaming when there are consequences, like flunking a class or getting reprimanded at work.

Second: how do you feel? Are you tired from staying up late to play? Are you achy from being hunched over your desk too long? Even though hours can fly by when you’re playing games, sitting in one place for hours at a time isn’t great for you — and it’s even worse if you don’t have an ergonomic setup. Speaking from experience, my wrist and shoulder will bother me a lot if I don’t keep good posture, and I often don’t realize until I’m already feeling lousy.

But we all have different responsibilities and different thresholds. Listen to yourself and remember it’s okay to step away.

Q4tQ: Have the dates for the next Diablo III season been set? Is there any news about which theme it’ll be?

We have dates, but not a theme (yet). Season 14 will end on September 16, and Season 15 will start on September 21. So wrap up everything you have to do in Diablo before the season’s gone!

And that’s all for now, my ship(wreck)mates. Adam will (probably) be here to answer your questions tomorrow, so do your thing and keep questioning.