Janeck of the Silver Hand: The weight of a sword 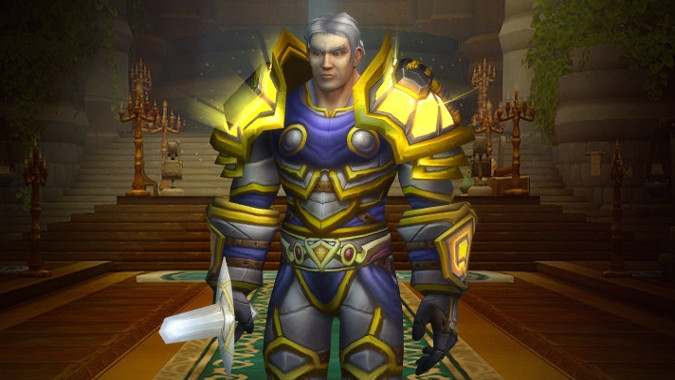 This character profile has been written for Janeck, one of our supporters. If you enjoy it, you can check out the other profiles we’ve written, too!

The child had not spoken a word since she’d arrived in the city.

She stood mute near the embassy, always staying close to the giant Ancient that the Druids tended to in the old pumpkin patch. Janeck had seen many things in his time, of course — a life spent following the dictates of the Holy Light had led him all over Azeroth and even beyond it. But still, seeing the violet-skinned Kaldorei standing in the light of the moon and feeling nature itself seethe in their hands, flowing into the enormous tree-like being had not become routine to him.

But for all their grace and power, the Druids were not what drew his attention. No, it was the look on the child’s face. The Sentinels and Druids meant well enough, but they were soldiers and servants of nature, and their thoughts went back to many days, months, years. He could tell they didn’t know what to say to her.

Still, he likely wouldn’t have said anything. It wasn’t his place and her ways were not those of his people. If the Alliance meant anything to him, it meant letting everyone find their own way.

“Have you killed many?”

Those were the first words she spoke since the ship arrived from Kalimdor, packed with refugees. He’d been on the docks then, mending wounds, calling upon the Light again and again until his eyes had been aching and sweat was running down his back. Calling the Light was as much a physical thing as a spiritual one and Janeck had called it until he could barely stand up. He’d healed her, too, but she hadn’t spoken to him then.

“Them.” She packed all the hate her small frame could hold into that word. “Have you killed many of them?”

“But you’ve killed some.” Her tiny hands were balled up so tightly that he was sure her nails were drawing blood. “You went with the ship to the dead city.”

“I did go to Lordaeron.” He looked around and saw a tall woman, one of their Priests, watching them with a look of concern. He didn’t know her name, and he was tempted to speak, to call her over. But there was something in the woman’s eyes telling him not to. She hadn’t spoken to anyone else, she’d chosen him. He dropped to one knee. “What’s your name?”

“Shivara.” She met his eyes, taller than a Human child would have been at her age. Then again, he had no idea how old she was. “I want to kill them. All of them. You…” She pointed to the sword on his back. “You’re a Warrior?”

“No, child. I’m a Paladin. A member of the Order of the Silver Hand.”

“I thought… don’t you kill them? You have a sword.”

“I have a sword and I have killed, yes.” He thought about what to tell her. “Back when I was much younger, my father was a Knight. He fought for Stormwind, when the Orcs came.”

“Did he kill many of them?” There was a rigidness to her insistence, to her focus. He reached back and drew the sword from his back, a long, simple thing. Presented it to her across his palms.

“You wanted to look at it?” She narrowed her eyes. “You were staring.”

“I…” He held it forward, and she reached out a hand but didn’t touch it. “It looks like silver.”

“It’s called Truesilver, around here. I don’t know if they have it on Kalimdor.” He changed the grip and placed the point in the ground. “I reforged this one myself, from his sword. He left it to me, when he died. I last saw him down there. On those docks.” He didn’t bother to tell her that the docks had been much smaller back then. In his memory, his father, bearded and gruff and his mother with her silver-gray hair, saying their last goodbyes, then watching her drop the faceplate on her helmet to hide her tears as she boarded the ship carrying him. “I don’t know if he killed any of them. I assume so. He and my mother both.”

“Aye, we’re not so different from you. Our women bear blades.” He pointed to a guardswoman riding by on her horse, her armor polished and tabard with Stormwind’s lion crest. Holy Light, let this be the right thing to say. “Both of them fought here. She cut her way through the Orcs with me in her arms and carried me to the boats.”

Her eyes widened but she nodded. He released the breath he’d been holding.

“They burned… my maemae and my…” She took a breath and fought not to let the sob out and he didn’t rush her. Let her take the time to master herself. Others would soothe her, once she was ready for that. “They have to die. All of them. They have to die for what they did.”

She didn’t answer, cocking her head to the side and measuring him. He waited a beat for her expression to move from wariness to simply wondering.

“They have children, too. When I was on the boat, I had a lot of time to think about it. And aye, I wanted them all dead. They burned my home and killed my kin and left me an orphan in a strange town with people I didn’t know and who didn’t understand. I made a decision, took a vow, picked up this sword when I was old enough.” He stood and sheathed the blade on his back. “And in time, I made other vows, and I went forth to vanquish evil and… Shivara, nothing you do will ever make them come back. No amount of blood shed will answer your loss. You could kill every single one of them and you’d still be the same person, and all you would have done would be to make some other child out there somewhere feel the same way you do. And that’s not worthy of you.”

“No. We don’t just let them. Ever.” He gestured out towards the city. “They burned it. All of it. When I came back here, it was all charred ruins and collapsed buildings, and it took us years and years to rebuild. And it’s really not the same place.” He took a breath, remembering the Stormwind of his childhood, the Stormwind he’d never see again. The Keep was in a different place, the park, the canals were smaller. So little of the city was as it had been, it had been smaller and the walls shorter and there hadn’t even been a Dwarven district at all. “It’s not your fault, you know.”

“I was a child on a boat sailing away from the only home I’d ever known. I know what you haven’t said.”

“So what do you do, then?” Her eyes were dry and her voice was steady but her posture had changed. She was less rigid, less wary. The moonlight shone down on them over the trees and the embassy was painted in it, edged in silver like the blade on his back. The same color as her blazing eyes.

“I use it.” He held out his hand and called, and the Light settled around his fingers. It was like sticking his hand in pure warmth, a rush of feelings nearly made physical. “The Light… you can see by it, you can warm with it, you can use it to stalk prey or provide shelter. You asked me if we let them do this. No. We do not let them. We stop them. With words if we can, with blades and magic and the Light if not. But we don’t, we can’t just kill them all, child. It would be easier. It would perhaps even be safer. And it would just make more pain in a world that has too much already.”

She stood there with her hands finally relaxed, looking at the glow around his hand.

“Why isn’t it the same as when Ezhan does it?”

“There are many ways to the same place.” He turned to the Priest, still watching them, met her eyes. Nodded very slightly, knowing she would come over and take the child into her care again. But just as the woman reached them the girl turned back to him.

“I still want to kill all of them.”

“Will you let me see your sword?” He could see the Priest about to say something so he drew the blade and again placed it on his palms, held the hilt towards her. She took it, her small hand surprisingly strong, lifted it off of his hands and stared into it for a few moments. Then she placed it back, gently. “It’s heavy.”

“Thank you.” She turned and walked away, and the Priest gave him a measuring but grateful glance before following her, speaking in tones too low for him to hear. He took the moment to look into the polished Truesilver in his hands, at the moon reflected in it.

Heavier than ever, these days.