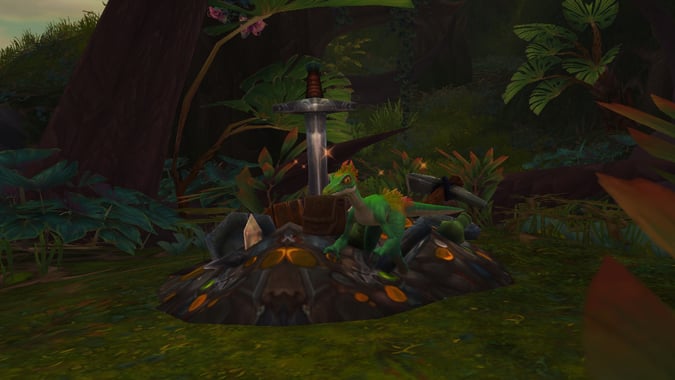 I love my trash lizard dad and I will follow him to the ends of the earth.

QftQ: How large is Azshara and N’Zoth? We know Azshara was basically the pupil of a (very large) eye, and assuming that’s a main eye and not a small one, that indicates a….very, very large entity. So, is Azshara as big as Helya? Only slightly larger than an elf? Is N’Zoth actually the size of the Exodar? Mount Hyjal? What do we think?

Well, we saw her confront Farondis in Azsuna, and she seemed pretty big at that point — but she was also using an older model for her shadowy “true” form, so she might be bigger than that. I’m assuming she’s probably pretty beefed up at this point, but she can apparently change her appearance at will, so…I think she’s probably whatever size she wants to be, frankly.

As for N’Zoth, like all of the Old Gods, I’m assuming he’s gargantuan. I mean, illustrations show the Old Gods looming over cities. Keep in mind that all of the Old Gods are pretty huge — we’ve fought portions of them. Yogg-Saron’s reach extended all the way from Ulduar to that dead World Tree out in the Grizzly Hills, and likely farther than that — we legit just fought a smaller portion that was exposed above ground in Ulduar. We’ve never seen him full size, or any of the Old Gods for that matter.

Q4TQ: How hard is it to use two Battle.net accounts from one PC? Is it easy to switch between them via the Battle.net browser, or does it get annoying?

You just pick the other account from the menu in the launcher — it’s not that difficult to do. It’ll save the username/password from the second account as well as the first, so really the only extra thing you need to do is select the correct account from the drop-down.

Now actually playing with two windows open…well that’s a slightly more difficult experience. Usually I’ll resize both windows to be smaller so I can keep track of which window I’m currently in — and I’ll throw one of them on the second monitor. I’ll set one character to autofollow the other, and go about my business. It’s rare that I play both accounts at once though, usually I only fire them both up if I’m wanting to trade something over the AH or farm a particular piece of transmog that one character just can’t solo by themselves.

I don’t get it though. If you’re just rushing to max, experience is experience, right? If you don’t care about the story at all, why does it matter if it’s a “side” quest?

Usually people are asking about this kind of thing because they’re trying to knock out the Pathfinder achievement. It doesn’t require you to complete every quest in a zone, it just requires you to complete the main story. You can easily get to level 120 in about two zones if you go after every quest, which means you’ve got a third zone’s worth of story quests to complete after you’ve hit max level. But people have other things they’d like to be doing at max level, so they’re looking for an easier way to identify which quests are considered main story quests, so they don’t waste hours completing quests that don’t actually count towards that achievement.

Q4tQ: Does anyone else miss the Commendations we used to get in Mists?

Oh absolutely! For those that might not be aware — Commendations were an item you could purchase once you reached Revered with a faction. Using the Commendation would unlock a 100% rep gain boost for all characters on your account. This also reduced the amount of time it took to go from Revered to Exalted, which was exceptionally handy as well.

I really liked this system, because when I was leveling alts, I kind of loathed the idea of having to grind out reputation on every alt I had. I mean…doing it once on the main was kind of enough, you know? But Pandaria also had a lot of reputations to grind, and there weren’t World Quests or missions that offered extra rep at the time. You could champion a faction, which gave you a bit of bonus rep for completing random dungeons, heroics, and scenarios, and the Zandalari Warbringers dropped stolen Insignias that gave additional rep with random factions, but that was it.

I suspect they view the whole World Quest/mission table system as an approximate substitute for what we had in Mists. And I think it works in some ways, but I do wish they’d put the Commendations back — give them an Exalted requirement for purchase if they really have to — just to make it a little easier in terms of alts. Legion kind of encouraged the creation of alts, after all. I have a lot of them to level now, and I’m not looking forward to endless rep grinding on all of them.

So, should we use an interrobang for quests that provide no close on how to do them?

Very funny. Fun story, I always thought quest bangs were called that as a nod to the interrobang, because it can be written as !? — which is essentially how a quest marker works. Quests start out as a !, and turn to a ? when you’ve accepted them.

I don’t think that’s the actual origin of the phrase, but it’s my headcanon and I’m sticking to it!

I just noticed that now, and I was so disappointed.

Probably because of the way Jaina’s story has played out. Logistically speaking, she hasn’t really been actively training anybody in several years. On top of that, her name isn’t exactly regarded with fondness in Kul Tiras — people naming themselves after her aren’t likely to get the most welcome of receptions. And tonally speaking…well, Jaina’s story this expansion wasn’t really a giant goofy funny wacky journey, so the tongue-in-cheek reference maybe wasn’t considered the most appropriate thing. Yes, it was a super funny nod, but it didn’t really gel with what’s going on with Jaina in Battle for Azeroth, you know?