The Queue: A turtle made it to the water 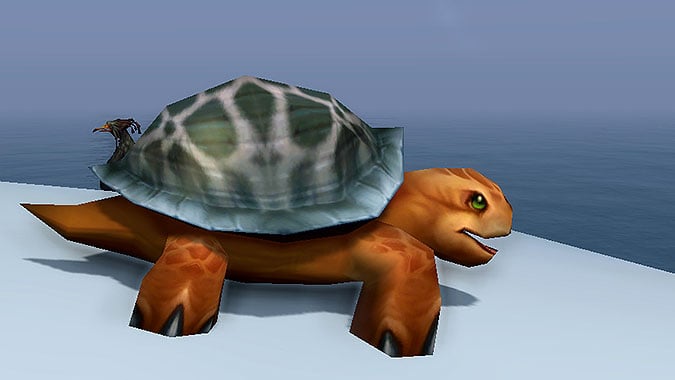 Now that we’ve all had far more time to do them:

I’m actually enjoying Tortollan more. The memory game is fun, and the A TURTLE MADE IT TO THE WATER one isn’t as bad as people say. Make Loh Go is also better now that they changed it to be faster (although it’s definitely the dumbest of them).

The Kirin Tor ones were trivialized either by addons (the barrels one) or by flying (most of the other ones). And when you couldn’t fly yet, they were more frustrating than anything.

Honestly, I just couldn’t do most of the Kirin Tor quests. Without an addon I would spend 20 minutes trying to do that barrel quest. I had trouble with Enigma because I’m just bad at spacial recognition puzzles.  I could do some, but not all, of the floating puzzles once I had flying (the ones where you had to fly through certain points still often eluded me). Basically whenever the Kirin Tor Emissary came up I just did Lay Race, and once I gave up on successfully completing them unaided, I used an addon to do barrels and enigma.

They were frustrating quests given by smug mages who apparently weren’t capable of doing these things on their own but were more than happy to chide you when you couldn’t do them. There’s a reason addons were made to help players out with these: they were frustrating.

Tortollan quests have some similar puzzles, but none of them feel as difficult — or, to me, impossible — as Kirin Tor quests. Plus I don’t find the Tortollans themselves as annoying as the Kirin Tor. They’re genuine and rather charming.

Oh, and also this.

Q4tQ: what will I miss in terms of content if I level an alt purely by doing instances? Will the character have access to WQ, warfronts and everything else?

Nothing, I think, except for the fact that you’ll be way behind on reputations if you want to buy gear or recipes.

Still leveling up (hit 117!), but so far I’m still not a big fan of Azerite armor. Given everything, it actually makes me wish that the Azerite Pendant was used to “reinvigorate” our Artifact weapons. Blizzard could’ve removed all traits (like they did) and removed the restriction of specialty to class weapon, then as the Pendant gained power in Azerite, the Artifact gained power (more class-based, less spec-based).

Not only are we healing the world through Azerite, we’re keeping some pretty heavy (and beloved) lore items relevant and really linking the previous expansion “trick” with the next expansion. Less disconcerting/jarring than simply going “toss aside your weapons, here’s random new armor stuff!”

Artifacts were such a big part of what made us feel powerful in Legion, and losing them had a real psychological impact. Even if we hadn’t become any less powerful by throwing our Artifacts in the trash, it just feels bad to go from wielding a weapon of legend to wielding a green dagger dropped by a quillboar. Maybe you’re still a super powerful hero but you don’t feel like one.

Azerite armor doesn’t have that same impact. It’s a piece of armor that you’ll probably scrap after the next dungeon run, and it doesn’t feel important. I’ll grant that you can customize these pieces in a way you couldn’t with Artifacts, but sometimes you get ilvl upgrades with undesirable traits or traits you can’t unlock yet. It’s not fun to get an “upgrade” that just sits in your backpack.

That’s one of the reasons Blizzard got rid of reforging: you would get upgrades, but you wouldn’t equip them because you needed to run to the reforger to give them (and the rest of your armor) the appropriate stat distribution. It made upgrades, which should have been exciting, into a chore. Now Azerite armor is a slightly different sort of chore, where you’re just as likely to let an ilvl upgrade collect dust in your backpack as equip it.

It would have been interesting to see the Artifact weapon system evolve within the weapon rather than creating this Azerite armor spin-off system. You could give the weapons new traits, add new appearances to collect, and just keep growing the lore of these legendary weapons.

Q4TQ: Can we all agree that Blizzard should have done a MUCH better job of explaining to people what warfronts are and how their cycle works?

Blizzard’s intent with Warfronts wasn’t clear, and that’s left a lot of annoyed — putting it mildly — players. Just letting us know what was going to happen could have alleviated some of that. Sure, we might have still been upset, but it wouldn’t have been a surprise, which makes a big difference. We could have talked about it, sent in feedback, and gotten out our frustration in conversation days or weeks or months before we hit our first Warfront.

Instead, we’re just figuring out how it’s supposed to work, and every ounce of player unhappiness is all happening right now. Even if the system stayed exactly the same, a clear explanation in advance would have made this go much more smoothly.

Q4tQ: Do you think we’ve reached a point in queued, automatically assembled group content, where speaking up is not only intentionally not required and not expected, but also… like awkward and unwelcome? I literally found myself.. like cringing at someone talking up a storm in a dungeon the other day, and when I caught myself doing it I laughed it off and reciprocated the conversation, but there was that moment of “WHOA why are we talking, is something going wrong?”

Where do you place, like… “conversation” in your LFX/Warfront/Island experiences now?

Conversation in random groups is so rare that anyone who does strike up casual conversation just seems odd right off the bat. There’s a little what’s up with that guy? to it. After all, are any of us actually here to make friends? Not usually. We want to get in and out of this place as quickly and efficiently as possible, loot in hand. In this context, instructions are useful, but pretty much everything else isn’t.

We’re conditioned to expect abusive chat in randoms, with the inevitable blame game and vote kicking chain as soon as you start wiping. So conversation is inherently suspicious. Is this person speaking up just to tease people out to insult? You don’t know, so you might just keep quiet. I know I usually do. (Though the one thing guaranteed to get me to talk is “blame the healer” discussions, when I’ll  wish people good luck before leaving the group. Bless their hearts, they’re going to need it.)

But at the same time… I think kindness has a ripple effect on the game. Saying hello, good luck, or thanking people for a good run makes the game that tiny bit friendlier. We must be the change we wish to see in the world. It doesn’t hurt to try to be friendly. (Probably.) So be kind to each other, as best you can manage.

Except for maybe those people who blame the healer for everything wrong in their lives. They’re usually jerks.

Forget governor. I’m running for King of The Queue.

Malkil, the Dark Fire for King of The Queue. I promise equal opportunity for incineration for everybody!

As a constituent, I want to know what my options are if I don’t want to be incinerated. Because, honestly, it doesn’t sound like a lot of fun. Fires are all well and good, but only when things other than me are burning.

And that’s all for today’s Queue ladies and gentlefolk.