The Queue: What a headache 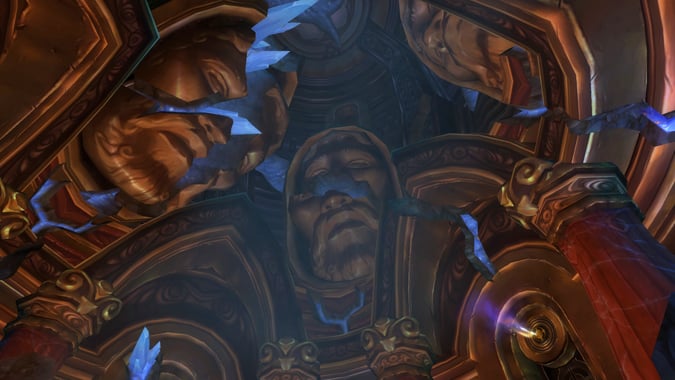 Okay real talk guys. If this place with the world soul’s beating heart and a shiny necklace is a Titan facility, who are those guys up on the ceiling? Are they just representations of the Titans? Or…well let’s face it, the Titans built the Titanforged out of stone, right? So were those faces in the ceiling actual, you know, creatures at one point who were essentially taken out by the world’s worst migraine? Inquiring minds want to know.

Inquiring minds have other questions that are probably way easier to answer though, so let’s get to yours, shall we?

Anyone have any idea why they raised the price of the virtual ticket?

Expanded coverage and video content, mostly. In the early years of BlizzCon, if you weren’t attending the convention, you had to pay for a PPV event on DirecTV, and it only covered the main stages. Since then, they’ve been expanding their coverage, including the stages, panels, and behind-the-scenes stuff. They’ve also been producing their own video series content for the convention on top of all of that. There’s not a lot you miss being at home these days.

Do I need to get to exalted with the 7th Legion to finish the War Campaign?

Nope, just revered! It takes a little while, but between World Quests, outpost stuff, mission table missions, and Island Expeditions it’s not too bad. World Quests on Zandalar will give you 7th Legion rep, and some of the outposts over there have their own solo quests that will give you rep. Missions will sometimes offer rep tokens for 7th Legion, max them out for additional bonus rep while you’re at it. And the weekly Azerite collection quest from Island Expeditions will give you 1,500 rep.

I did it all pretty much over the course of a weekend, so I wouldn’t call it an arduous process or anything.

This wedding quest in Drustvar is so confusing. So the memory starts when you pick up the wedding ring from Alexander Treadward’s skeleton. But who’s memory is it?

It’s less a memory and more like…residual past energy from the general area. I mean…Drustvar’s full of witches and Drust and other spooky stuff, so weird paranormal occurrences are probably kind of commonplace out there.

But as a side note, if you finish all those quests, don’t forget to pop back into the chapel. On the second floor, check the chest of drawers for a toy that will let you turn back the clock any time you’d like. It does so without spawning all the nasty mobs, so you can just spend some time looking around without being pestered.

Q4tQ: How are you feeling about the missions this expac? I like that they don’t feel required now, but still provide a decent bonus. Do you think they’ll increase the rewards from them eventually, or do you think they’ll stay about where they are?

I find them increasingly boring, and I’m wondering why exactly we have the mission table in the first place. All the rewards you can get from the table are rewards you can also get out in the open world. It was useful for unlocking the outposts, and for doing the War Campaign, but I’ve finished both of those things. Now I’m kind of wondering what happens when I finish grinding all these reputations to Exalted.

I mean…don’t get me wrong. I loved the mission table in Legion — it was great! Didn’t require a ton of oversight, and I got a bunch of cool stuff from it over the course of the expansion. I’m just kind of underwhelmed by the Battle for Azeroth iteration right now.

Is it possible the WQs for weapons are being set as NOT what you specialization is? At this point, every weapon that my guild has seen in a WQ is for a spec they were NOT in at the time the quest was generated.

Part of me is quietly beginning to wonder if this is the case. I play an Assassination Rogue. I have exactly one weapon type I can use — daggers. I have not seen a single World Quest offered with a dagger as a reward since I unlocked World Quests. I do tend to check the quests fairly frequently, so it’s unlikely I missed seeing one, but I will admit there’s always a possibility I missed some narrow window somewhere.

However, I have gotten I don’t know how many fist weapon drops over the last few weeks, and I can’t do a thing with them. Oh they’ve been added to my Wardrobe appearances which is good I guess…except I can’t transmog anything but a dagger on top of a dagger. So these weapons are patently useless to my character.

It’s gone from minor inconvenience to outright annoying, particularly since I’m playing a class that number one, relies mostly on doing damage to be effective and number two, relies on weapons in order to deal all that damage. I’m lucky — I had a lot of gold left over from Legion, so I managed to snatch up a couple of 310 daggers from the Auction House. But there are others out there who don’t have that kind of gold floating around.

I mean, I’m not going to sit here and call it an outright conspiracy or anything, but it’s not only weird, it’s downright discouraging to see weapons drop for every spec but the one I’ve been playing since Wrath.

QTFQ: Is it just me or is the war campaign quest line the biggest disappointment ever? This is supposed to be the quest line that the whole expansion is based around and yet there isn’t anything special to them. There are horde leveling quests that are strikingly similar to some of the Alliance War Campaign ones. I reached the end of the campaign for now and am not in the least bit excited to see where it goes.

I will admit, it’s not the most exciting piece of content they put in Battle for Azeroth — but what you have to remember is that this is just the beginning. We’re establishing things for patches later on down the road, and that story will continue at some point. Both sides have some big story hooks that come in at the end of their respective story campaigns, and those will inevitably tie into later iterations of the war campaign.

We’ve only just started this expansion. When we began Legion, we didn’t even know Argus was going to be a thing. I’m pretty confident that we’re going to continue seeing excellent storytelling throughout the expansion, even if some of it feels a little flat right now. Sit tight!