The Queue: Knock once if you’re proud of me 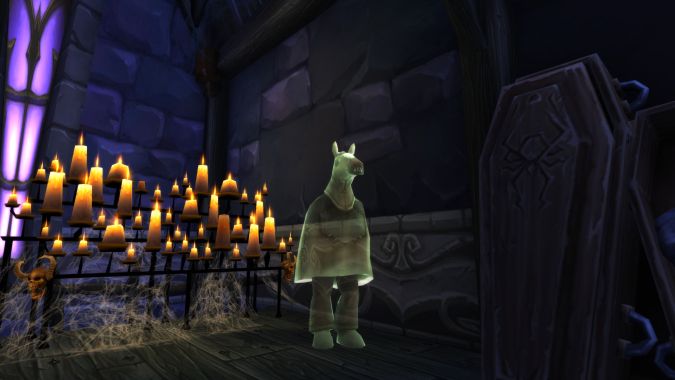 This Queue’s a bit on the long side, so let’s dive right in.

DEFIANT/GRAY HAS — OH MY YOGG — A QUESTION ABOUT JUSTICE AND VALOR THINGS:

Q4tQ: I’ve been thinking about BFA and especially how everything RNG has been cranked up to 11. Island Expeditions are a prime example of this. RNG is EVERYTHING there. Its really soul crushing when you just don’t know if anything will drop ever. Then I thought about the good ol’ days of WOTLK and how we had these things called Badges of Justice/Valor that dropped and we could make progress towards what we wanted. So my question to you o’ illustrious Blizzard Watch Writer – do you see Badges coming back?

Quick answer: No, I don’t see those coming back.

Longer answer: I’m okay with RNG in some areas of the game — boss drops, world-drop BOEs, rare mobs — but I don’t like it in every area. And I think that’s something that could be addressed with something akin to Valor and Justice Points (or Badges). My go-to example for this is the stupid dumb stupid and stupid Paragon system from Legion.

Now, I realize not everyone dislikes them as much as I do, but I would be significantly less grumpy about them if they had a fail-safe system in place for mounts and toys. Like, sure, you have a chance at a mount every time you open a Cache… but what if you also had a guaranteed “Paragon Token” or something for every Cache you opened? And then those Tokens could be used to purchase the mounts in the event that RNG was really not on your side? The same could be said of Dubloons and Island Expeditions (even with the hotfix from last week). Give us something to spend them on that makes farming feel a little more worthwhile and the rewards a little less RNG-y.

ZOOMING RIGHT ALONG TO TECHNOSKALD’S QUESTION…

Q4tQ: How far out do you keep your camera zoomed? Does it differ significantly in various game activities?

I keep it zoomed out as far as possible, pretty much as often as possible. Exceptions to this are if an environmental object gets in my way and I have to zoom in to avoid it, or if I’m taking a screenshot that I want a particular look for. I’m still disappointed in the reduced zoom distance that Blizz added — yes, they added a reduction, shush — back whenever that was. I like seeing as much around me as possible.

HUSSKIES, I’VE BEEN WONDERING THIS MYSELF:

Q4TQ: If Silvermoon eventually becomes a warfront (which is storywise very likely even though I don’t want it to), do you think Blizzard will (finally) revamp the zone and the city like they did with Stromgarde? Do we even maybe hope for them to make it so we can finally fly there?

Personally, I want this so, so, SO badly it hurts. But it’s a monstrous undertaking for a feature that’s getting a relatively lukewarm response at best. After all, Silvermoon is technically located on Outland’s map. To update the zone, Blizzard would pretty much have to redo it from the ground up — and not just the environment. Everything about it.

CYPHER DOESN’T REALLY HAVE A QUESTION BUT I HAVE A RESPONSE:

So fun fact: You can complete the Zandalari Forever scenario/questline without being 120. As long as you do the main story questlines in the three zones, it’ll prompt you to finish it up in Zandalar at the end. I was rather surprised, and also kind of..hrm…disappointed. Mythic dungeon for the Alliance, but Horde can zoom through without max level? Wow.

So, I don’t mean to pick on you, Cypher, but this is a particular point that gets brought up now and then whenever something like this happens in-game, and it’s something I don’t really agree with. I think if requiring a dungeon or a quest or whatever else fits with a storyline for one faction but not for the other, it doesn’t need to be shoehorned into the latter.

When there are direct comparisons like the War Campaign, it’s easy to line them up and point out what’s not a 1:1 mirror of the other. But that’s not really something players do with every aspect of the game, is it? Yes, there’s a group out there that might, but comparing the Horde capital to Boralus isn’t met with “well, one side has canals and shops, so why doesn’t the other?”

Horde and Alliance having different ways to experience their own stories makes the game feel more alive to me. It makes the factions feel like a more important decision. Players are always saying they want more power to choose what they do in quests. Well, this is kind of like that, but on a macro scale.

You may not agree with me — and that’s okay! — but I’m totally fine with the setup as is. (Okay, well maybe except for the level requirement. Being 120 would make more sense for Horde.)

Q4tMitch: Was the Champions of Azeroth faction introduced way too early? I feel like we didn’t spend enough time waging war and [PUPPIES] up the planet, before Magni swoops in, and tells us ‘start fixin these woonds’.

I realize you had a whole layout for 8.0, 8.1, and so on, but I had to truncate this a bit. I hadn’t really thought about it until you asked, so… I guess it’s not a huge deal to me? But you are right — if you think about it, it might have made more sense to introduce later. More than anything, it feels super weird to have Magni all, “Go get that Azerite to heal the planet and make things better!” when we’re totally going to use that Azerite (and its empowerment of our necklace) to blow up the enemy faction. The two feel slightly at odds.

But hey, I’ll reserve my judgment for when we see the expansion’s whole story. Maybe it’ll make more sense then.

MISTAH JAY HAS HIS 2BES AND I THANK HIM FOR THAT:

2BE: Lord Stormsong vs Magatha Grimtotem

2BE: Limericks vs Haikus

Q4tQ: Do you think Blizzard will ever introduce non-Blizzard heroes into Heroes of the Storm. Perhaps some characters from Destiny 2 or Call of Duty seeing as how they, or rather Activision, like putting other games on the launcher.

No, I don’t. We may see Heroes-specific characters, like Orphea, added. But no way we’ll see non-Blizzard characters added to the game. Putting Activision games on the launcher is a far cry (no pun intended) from adding characters to a Blizzard game. I would not worry about this one.

MIKE BROWN, I WISH I HAD A BETTER ANSWER:

QFTQ and pet collecting community: I looks like we will need 5,100 Polished Pet Charms to get all the battle pets (plus 750 for two toys.) Any ideas on the best ways to get these??

Best way? Make a ton of alts, never miss a Pet Battle World Quest on them if it rewards Charms. The Charms are account-bound and, last I checked, the WQs can be done on multiple characters. There might be an alternative route to farming (commenters, please help me here), but I think this’ll technically be the most effective way. Morning edit: Also, keep an eye out for Mission Table missions. Ironic, given all y’all’s comments yesterday, but those missions are definitely useful for your purposes.

KALCHEUS REMINDS ME OF A GAME I MISS:

Off-Topic Q4TQ: Is Stardew Valley better on PC or console?

PC has multiplayer and will generally be ahead on that sort of update. But given that’s happened once in several years, I say get it on the Switch if you can. The portability is fantastic. If you don’t have a Switch, then go PC.