The Queue: I unabashedly love Warfronts 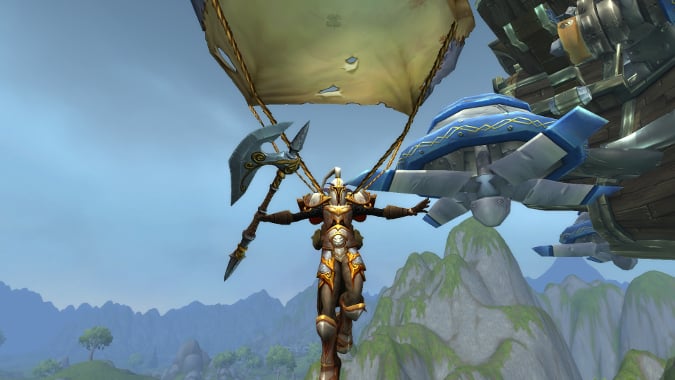 Been running them nonstop on one of my three 120 characters and I love Warfronts. I love that they’re like PVP but allow you to do things like tank the enemy so they’re really rewarding for my Blood spec DK, or I can go in Arms and just go to town on people and if I die, it’s not a really big deal. I just think they’re extremely fun.

Will we actually have to get exalted on the actual Dwarf or Blood Elf though? (To unlock Heritage Armor)
I’m fully exalted on a character somewhere on each faction, but likely not my Dwarf or Elf.
Is this operating like Allied race rules of: Just be exalted on someone…?
Or is it back to the grind?

QFtQ: With more story being added via Warfronts in 8.1, does this mean the events of the Warfront scenarios are cannon? In other words, are we collectively killing off Danath Trollbane, Muradin (that’s going to make Champion of Azeroth emissary turn ins awkward), Turalyon, Eitrigg, Rokhan, and Lady Liadrin, or are they there purely for us to have a boss to fight at the end, and not really part of any story.

It’s likely that Eitrigg and Danath survive whatever happens in Arathi. Yes, we kill them when we’re playing through the Warfront, but I think you have to be mindful of the whole gameplay vs. story balance — the Warfront as you experience it in game needs a definitive ending, but the actual events of the clash between the Alliance and the Horde are more of a series of battles and not something so easily resolved.

That doesn’t mean that the Warfront scenario isn’t important — canonically, the Horde and Alliance are fighting over the zone, that’s absolutely happening, and Danath Trollbane and Eitrigg are heading up each faction’s forces in the area. It’s just not the case that either of them is dead, just like it wasn’t the case that Drek’thar was dead despite those hundreds of Alterac Valley runs I did over the years.

Repeating from my earlier (very late) post in the previous queue…

New things added to Brewfest: 0
ilvl of boss trinkets in Brewfest: i289

This was according to the forums, I haven’t checked it myself… anyone care to confirm if these sad rumors are true?

They’ve been hotfixed and are now ilevel 335 trinkets. I can personally attest to this.

Something I’ve wondered about for a long time …

Would I be correct in guessing that the art team, when designing armor, mainly designs it to look great on male humans and orcs, and then just does the best they can modifying it for other races?

Not just armor – anything wearable, like tabards. I love the recent update to tabard models because they finally make more guild icon options viable for female toons. All of the icons looked just fine with the old tabards when displayed on the flat, broad chest of an upright male human, but some ended up being quite questionable when appearing on a “conform to every curve” tabard on a female character. I heard a story from somebody in a guild where the GM decided to change the guild icon, and was promptly greeted with a chorus of, “OH HELL NO!” from every female dwarf in the guild.

I am obviously not on the art team. But I’ve heard it said a few times now that this is not how Blizzard works — that in fact, they design the look of in-game wearable items based on concept art and don’t default to Humans and Orcs first. Memories of bugs like the original Orc Shoulder bug make me believe it — I feel like that bug would have been caught and fixed a lot faster than it was if they were always checking out how gear looked on an Orc first.

But I don’t actually know. Armor tends to look good on my Night Elf, but her very slender (in comparison) arms and shoulders sometimes skew things a bit. It might just be an unavoidable consequence of trying to design gear for so wide a series of body types.

QftQ: I opened up some of the additional outpost flight paths just recently on my Horde Toon. Now I’m getting missions to upgrade these outposts. Are these upgrades worth the war resources? Or just leave them because the FP are really all you need?

I’ll admit, I haven’t bothered to do them on my Warrior. My DK did them back when I was convinced that would be my main going forward, and then I never really even noticed that anything had changed.

Can this warfront be summed up as two old dudes fighting over a field?

Danath Trollbane is the last living heir to the Trollbane dynasty and with Galen permanently dead and Thoras off being a Death Knight and one of the Four Horsemen, probably the only hope Arathi has of ever rising again.

Eitrigg is there to steal the guy’s house.

Q4TQ NA Alliance: Have you tried the Warfront yet? What do you think?

I answered this one in the header, but yeah, I did it and have done it quite a bit and I like it. And for me I think the best part is that you are guaranteed to get something.

There will be an epic in your bags when it’s over. Will it be the best epic possible? Nope. Will it possibly be an inferior duplicate of something you already have? Could be. But it’ll be something. After running LFR and several mythics and normal Uldir and getting squat for the whole week, it’s refreshing to absolutely know I can guarantee that I’ll get something from running the Warfront. I’ve gotten weapons, armor, a shield, and while it’s not super awesome gear it’s all 340 or above.

Just an FYI – when I read about the heritage armor for dwarves, and the need to be Exalted with your own faction to get it, I checked out the reputation on my dwarf hunter and found I was only half way to Revered. I put on the Ironforge tabard, made my way to The Mechanar in Outland, and ran it about eight times to get to Exalted. You get about 3000-3500 rep for every clear of the dungeon, and you can clear the dungeon in about 5-10 minutes. I got approximately 27,000 rep in under an hour.

I just went and checked this in Shadow Labyrinth, and it works. I got Stormwind rep for every kill I made. Figured I’d make sure people who are preparing to get exalted on their home faction know it’s an option.

Why can’t you join Warfront as a raid group?
This sucks, wanted to do a guild run…

I have to admit I don’t understand this myself. My guild ran into the same problem. The only explanation I could think of is they don’t want a guild group of, say, 17 people to end up holding three other players hostage by refusing to play the objectives or otherwise trolling. If five players decide to be jerks, fifteen of them can still pull the Warfront off. But if only three of you are out there trying to win? That would be a very hard slog.

Still, I’d like it if a 20 player group could run a Warfront together.

Okay, that’s the Queue for today. I’ll see y’all next week, by which time I expect I’ll finally have had enough of Arathi. Looking forward to the Darkshore Warfront, let me tell you.

Blizzard Watch is made possible by people like you.
Please consider supporting our Patreon!
Filed Under: Warfront
Advertisement