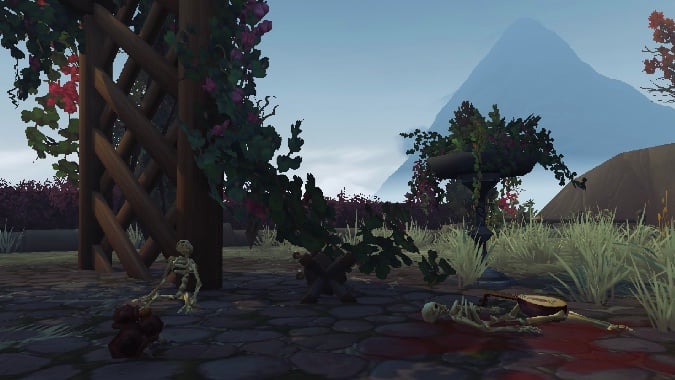 I have questions about some of yesterday’s Queue comments. Questions that are never going to be answered because I am not going to google them. But I think I’m going to blame Mitch and his Nintendo talk. I have a feeling that’s a significant portion of the problem.

And now that we’ve gotten the difficult business of who to blame out of the way, let’s get on to an all-new day of madness.

Q4Q: Why is the guy’s corpse still at his wedding altar in Drustvar when his nicely tended and oft-visited grave is within line of sight of it. Why did they just leave his corpse – with the ring still on it – lying out in the open? I don’t get it.

While we are, just maybe, expecting a little too much realism from WoW here, this is an interesting thread to pull at. The way the wedding was described left me with the impression that it was fairly recent. The flowers on the trellis look the same in past and present. There’s a wedding bouquet sitting on the ground, and though the roses are dark as though aged they’re still there.

And yet the people have been reduced to skeletons. Perhaps, though, they were meant to be picked to the bone by the wolves in the area.

But the area has been cleaned. There are only two sets of bones. It implies someone collected some bodies but left others — including the groom — to be torn apart by scavangers. It’s a stark contrast to the supposed love the couple had for each other. It’s weird.

Also what the heck is up with the caterer? That’s the part I want to know.

Q4tQ: ‪With Hallows End on the horizon, what would you add to make it a more exciting holiday? ‬

WoW has fallen into a real rut with holidays, which seem to be updated once every six or seven years… and for long-time players, that means boredom. So much boredom.

To keep these events feeling interesting, I think they should get quest updates every year. Keep advancing the event’s story instead of, oh boy, another year of the horseman flying around and setting things on fire. I just see the horseman, off-stage, saying “But what’s my motivation?”

Q4tQ: Have you been using the Mobile App since BfA launched? It’s not easy to have a stockpile of resources this time around to be doing missions that way, and since I lost access to Legion missions, I’d only have my main to do them on.

I use it intermittently, when I’m too lazy to log on. I’m mostly using it for rep, because, again, laziness (and it does add up, particularly when you can get the bonus rep). The problem, however, is that I run out of resources if I do this very often. I have to log on and spend time questing to collect resources, which really limits the app’s usefulness. It’s an occasional convenience at best.

I think it will be more useful when they add the calendar to it. I would find it really handy to have a quick way to check on guild events in the app without having to fire up the game, but right now you just get a “coming soon” message.

Though also the app is so slow that I could log into the game in the time it takes to load. But for the purpose of missions, I can at least avoid the twisty-turny path up to the mission table. That may actually be the real convenience of the app.

Q4tQ: If you had to pick another in-game weapon to start talking to you like my shovel does, what would it be? Which weapon would have the most to say?

Okay, first up… shovel? Do I want to know?

And second, I think it would’ve been cool if all the Artifacts could talk. They’re all these legendary weapons with a long, storied history. While there are some that have specific reasons to have a personality… why not all of them, as just a side effect of their tremendous power? I really enjoyed the Artifact thing and this would have added some interesting flavor. Bring on the sentient weapons, Blizz.

Why can’t hunters tame rams, with the emphasis on the ram in dwarven culture, why aren’t we using rams to punt bozos off of mountain ridges? Sure, there’s goats but it’s just not the same.

Blizzard seems to actively avoid duplicating mounts and pets. But soon… hopefully soon… Hunters will be able to get a bee battle pet, a bee pet, and a bee mount. I, for one, welcome our new bee overlords.

Do healers ever get the credit they deserve? *cries*

Okay, so Eno was talking about a Heroes of the Storm bug, but I think this answer is applicable across genres: no.

And that’s all for now, my friends. Adam will be here to answer your questions tomorrow, so please leave some for him instead of… whatever happened in the Queue yesterday. As usual, I’ll be back next week.