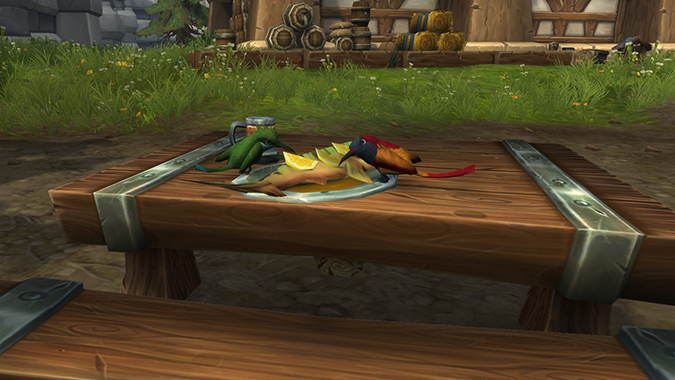 I’m not sure if these little dudes are after the fish left out on that table, or the lemon on top of the fish. What I am sure of is that they should both be made Battle Pets immediately. I mean…look at them, they’re adorable!

Grumpy, cynical Q4tQ: many people are excited for the Classic WoW demo at Blizzcon, and many more will be eager to try it when it is formally released. Do you think there will be a steep falloff when modern WoW players realize that many of the bells and whistles they take for granted aren’t there?

It’s entirely possible — nostalgia only goes so far, after all. I think they’ll get an initial surge of players checking it out just to, you know, check it out. Players that have been around since Classic may choose to stick around for fun or nostalgic reasons, while players that started playing in later expansions may just want to see what all the hubbub is about.

And some people will be perfectly happy playing with the old version of the game, while some people may prefer the conveniences that were added over the course of years and years of development. I know for me, I plan on checking it out for fun and for memories, but I don’t really intend to give it any extensive amount of dedicated gameplay. I liked Classic, but I liked it back in 2004 — I also like how the game has evolved over the years.

So yeah, I expect there will be some kind of falloff after it’s launched, just from curious people who choose to take a peek and decide it’s not their cup of tea. That’s perfectly okay, there’s still modern WoW and all the wonders and conveniences of Battle for Azeroth to play through.

Q4Q: do the warfront quests that reward all those resources reset each flip?

They absolutely do! So do all the rares — you’ll get loot from those once per flip as well. I sort of wish the flip weren’t so drawn out, but the Warfront itself is pretty fun. I’m hoping that new Warfronts are added on a staggered schedule, so for example you’d be farming rares in Arathi, but actually participating in the Warfront in Darkshore during the same week’s span. It’d go a long way towards helping that feeling of idly tapping one’s fingers while waiting for the Warfront to hurry up and open up, you know?

QftQ: What do you think the odds of us getting a Flight Master’s whistle for the rest of Azeroth would be? I’ve only really used it this expac but OMG! I LOVE IT!

You know, when the whistle was added last expansion, it immediately went on the list of “favorite things from Legion that I’m really going to miss” — only I didn’t end up missing it because they decided to carry it over. And you’re right, it’s incredibly convenient. On the one hand, I’d love to see it carried over to the rest of Azeroth and all earlier expansions. On the other…well, we’ve got flight in all those old areas already. It’s easy enough to get around, so is a whistle really necessary?

I think if they were to add such a thing, it should be something that’s unlocked over the course of play, similar to flying. Not necessarily by the same methods — I mean, it isn’t flying. But it might be useful as something presented as an alternative to flying, particularly for old expansions like Warlords. New players tend to miss out on Draenor flying, because completing Pathfinder requires sticking around after you’ve already outleveled the content. Offering an account-bound Flight Master’s Whistle for those old areas would help take the sting out of not having flying unlocked for that particular continent.

Is it just me and my eyes, or did nearly everybody seem to abandon their Legion class mounts once BfA went live?

Well you have to realize a lot of those class mounts are flying mounts. They’re big, they’re bulky, and it’s kind of annoying when mounts intended for flying don’t actually fly. I think a lot of it also has to do with mount utility — obviously the Water Striders are super popular right now because they walk over water. The Sky Golems are popular because you can pick flowers while in them, no need to dismount. So you’ll see both of those out there in the world a lot right now. Once we reach the point in the expansion where flying is unlocked, I’m pretty sure you’ll see a variety of different mounts all over the place again.

Q4tQ: How and when do you think they’ll increase the item level of the Heart of Azeroth?. Right now it’s at 367 (from hitting Revered) and you can obtain 370 from Heroic Raiding and the Arathi Highlands Warfront.

I imagine they’ll jump it with each patch, but that’s just speculation on my part. Since we’re getting both a new raid and a new Warfront in 8.1, I suspect bumping up the item level will involve participating in that new content. Mind you, this is just based on how we’ve been boosting the item level so far. It’s also entirely possible there’s going to be some kind of new way to bump up the item level — we just don’t really have enough information to clearly answer that question as of yet.

Q4tQ: Trying to farm old transmog set and I have found that I want a few LFR pieces. Is there a way to Queue for those at 120 or are the Appeareances unlocked thru Normal?

There’s a way to queue for them, but how you do it varies with each expansion. I believe the only raid to get the LFR treatment in Cataclysm was Dragon Soul, and you can queue for the LFR version by going to the raid entrance and talking to the NPC outside — her name is Auridormi.

At the moment, there doesn’t appear to be an NPC available to queue for Legion raids in LFR mode. I’m assuming they’ll add one eventually, but for now there’s no way to go do it. That’s a little disappointing, but I’m sure they’ll patch someone in there eventually!