For the first time in the two years since Overwatch launched, Mercy is no longer the primary healer in the game’s roster of support heroes. Moira, a newer addition to the game’s cast, now out-heals the combat medic in the latest competitive season. It’s an inevitable reality given all of Mercy’s recent and not-so-recent balance changes, and the game’s shifting meta — but it’s also a contradictory one for Blizzard’s own, repeated, goal for the hero.

In the comment under the recent patch note that detailed a nerf to Mercy’s healing output from 60 healing per second to 50 (reverting her back to launch day numbers), Overwatch lead designer Geoff Goodman wrote, “Mercy is intended to be able to consistently pump out more healing than any other healer over the course of a match.” The change, Goodman said, was to “close the gap a little” from the other supports, while maintaining “her status as the go-to pick for raw healing power.”

For Competitive Season 12, where players tend to try harder to coordinate a win than in other modes, Moira — not Mercy — is the go-to pick for raw healing power. The difference is slight on the Overbuff hero leaderboards, but it’s crucial to understanding the flaw in Mercy’s current design and role in the game’s meta.

In a long post that sparked a discussion about Mercy’s current status as the healing-focused hero in Overwatch, Reddit user jmillsbo also pointed out that Moira not only heals more than Mercy but she deals way more damage than her, even if you include Mercy’s amplified damage stat from her secondary fire. Moira is simply a better, more impactful pick than Mercy, and Moira hasn’t received a fraction of the changes that Mercy has received in the past year.

Because Mercy now heals less, she has less time to stop healing to amplify damage and to even resurrect an ally — an ability that was once her most powerful and is now her most punishing. On top of that, Mercy generally gains less ultimate charge because of the reduced healing, and when she does activate Valkyrie, the chain healing isn’t powerful enough to keep anyone alive from basic damage, let alone enemy ultimates. In a meta that is heavy on Zaryas combining Graviton Surge with ultimates like Pharah’s Rocket Barrage and Hanzo’s Dragonstrike, Mercy can’t keep up. 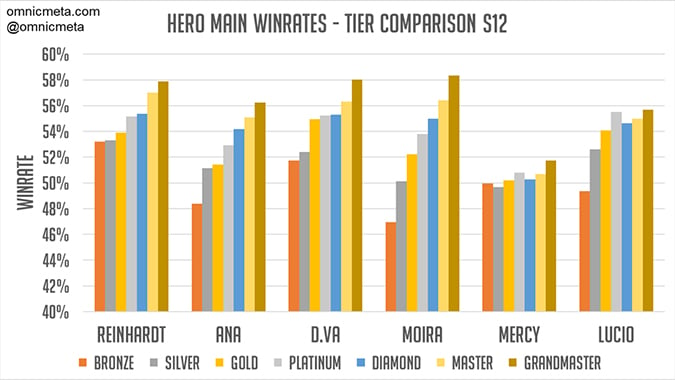 Mercy is far from the go-to pick for pure healing output anymore: she’s the go-to pick to increase your odds of defeat. The hero has an all-time low win rate in PC competitive according to the OmnicMeta, which puts her at the bottom of the supports in most ranks and the bottom of the entire hero roster in the highest ranks.  Specifically, she’s sitting at a 48% win rate in Bronze rank and a flat 50% in Diamond and above, a rate that’s been dropping since the significant nerf in January. Other heroes, like Ana and Sombra have been at around a 40% win rate in the past, but Blizzard has since tweaked these heroes back to significance.

In the most recent developer update, where Overwatch Game Director Jeff Kaplan detailed both the upcoming Torbjorn changes and provided an outlook on the future of the game’s development, he said the team will start to focus more on hero balance changes. Kaplan specifically points out the recent support changes, which included the Mercy healing rate nerf, as “extremely successful,” and said that they “really changed the game in a great way.”

Kaplan is right, the changes were great — for everyone but Mercy. They brought Ana back to relevance (her instant-heal Nano Boost now effectively a pseudo-resurrect), they tamed Brigitte’s power without destroying her, they made Lucio good again, and they eased the resource-starved Moira players. These changes were clearly made to combat the amount of burst damage in the game, to give the healers the power to respond. In many games these days, Doomfists basically one-shot people with series of melee combos, Junkrats decimate anyone near them, Hanzos send flurries of high-damage arrows across the map, Roadhogs still hook and disintegrate their targets, and even support players on Brigitte can stun and whack someone apart in seconds. Ana, Moira, Brigitte, Lucio, and Zenyatta all have forms of burst healing and immense damage output, be it via their normal abilities or their ultimate abilities. Mercy does not. Raw healing output, as Blizzard said , was her answer to that weakness, and yet, in that same patch, they nerfed it. 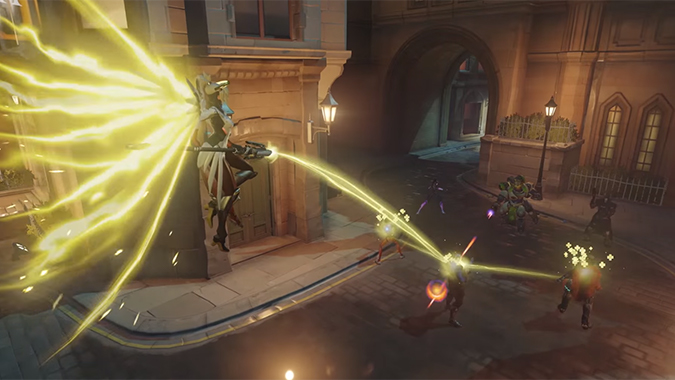 Right now, it doesn’t matter how good you are at Mercy. To play her is to lose games, and to lose skill rating, regardless of your individual skill. It’s not that she’s not meta, because Mercy has always been played successfully when she wasn’t a top pick in professional games or Top 500 ranked games, it’s that she’s significantly underpowered in terms of raw numbers and far too risky to play compared to any other support in the game. This forces teams to either work around her with a hero like Pharah or to give up valuable team-saving ultimates like Zenyatta’s Transcendence or Lucio’s Sound Barrier. And none of that is to mention how many stuns and knockbacks exist in the game that cancels Mercy’s Resurrect ability, drastically lowering her overall impact in a game.

Blizzard hasn’t acknowledged any of the current issues with Mercy despite many players, like popular Mercy streamer Eevee, discussing her outstanding issues for months since her rework. Hopefully Mercy will see some kind of buff or new mechanic to let her compete with the other supports in the game. Even something like a brief burst in healing output on a cooldown would both keep her as the best overall healer in the game as well as give her a skill-based tool to keep up with the high amounts of damage.

She needs something that puts her healing output over Winston’s Tesla Cannon, which is one of the weakest weapons in the game. When Mercy had an instant Resurrect, it made up for that lack of healing, but with a cast time, a 30 second cooldown, and the intense vulnerability that comes with using it now, she can’t do anything that might result in her death, forcing most players to play cautiously. Overwatch is a much faster-paced game that it ever was, and it’s only getting faster and more aggressive with hero additions like Wrecking Ball and several damage buffs to hitscan heroes. There’s no room and no time to play cautiously now. Mercy’s current design rubs like sandpaper against the game’s new flow.

The healer who was built to save people, keep them alive, swoop in, and bring them back in one powerful moment can’t do any of those things very well anymore, and that’s a big issue for the health of the game and those that want to play her. If what Kaplan said in the developer update is true, then hero balance is a top priority for the team, and that means Mercy should get immediate attention. Because, right now, Mercy, of all of the heroes in Overwatch, is the one that needs to be saved.