A lot has changed in Overwatch since last year’s Halloween Terror event, and that means there’s a new and easy strategy for getting the once-hardest achievements of Junkenstein’s Revenge. This guide will mostly focus on the Survivor achievement, which requires your team to finish and complete four bonus waves on Expert difficulty, but it should apply to any of the other achievements, too.

Let’s start by talking team composition. I did this achievement once with a random group of strangers, and once with three of my friends. Brigitte is the most necessary pick to deal with everything that the mode throws at you, but the other three choices can be tweaked a bit. You’ll want a Zenyatta for sustained healing, a McCree for easy fodder enemy clear, and either a Solder: 76 or a Torbjorn. I could see Hanzo working, but that player needs to be hitting a ton of their shots, because the hitscan heroes offer ultimate abilities that make it easy to clear out huge waves of enemies.

I break down the spooky Eichenwalde arena into three lanes: left, middle, and right. You want your McCree to stand on the top left side and to back down toward the middle during Symmetra (The Summoner) boss encounters and occasionally when the team needs help. The rest of the crew should be grouped up in the middle portion of the map in front of the door. This lets Brigitte’s passive healing get to everyone and offers the best defense of the gate. This mode is mostly about minimizing gate damage from Rip-tires and Zomnics. 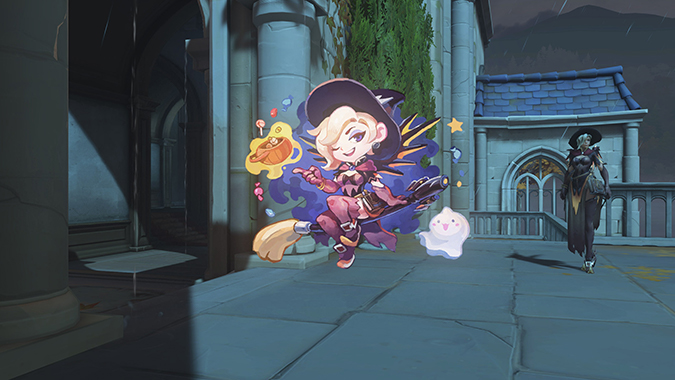 The bosses are simple to deal with. Don’t let Roadhogs or Reapers use their ultimates, and take out the Mercys so they don’t resurrect any of them. None of them should be a problem if you focus them down. My groups got them killed quickly, but always took a break to make sure any incoming tires or Zomnics were dealt with first.

This specific team composition, combined with the stuns on the most devastating enemies, means you’re at little risk of dying, especially if your hitscan heroes squeeze in time to take out the Bombardiers when not worrying about protecting the door. The huge sustainability means the biggest risk is having your gate lose all of its health to tires. In both of my runs for this achievement, we finished it with at least a quarter of the gate’s health left — and we were a little sloppy on killing Zomnics and tires before they hit the gate. Do both more diligently than us, and there’ll be no reason you can’t get all of the achievements, and that really cute Witch Mercy spray.