Only so you would ask: Bundtcake of the Shattered Sun 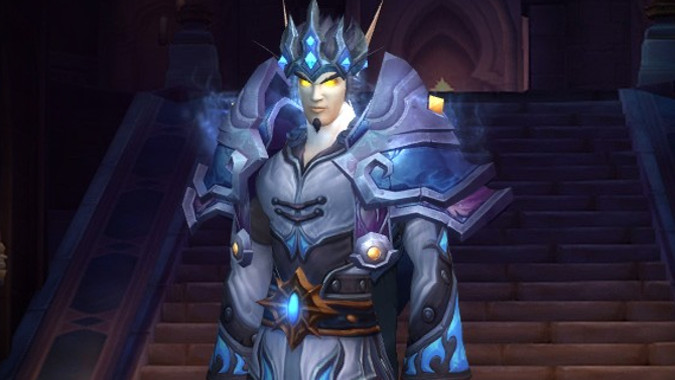 This character profile has been written for Bundtcake, one of our supporters. If you enjoy it, you can check out the other profiles we’ve written, too!

“Of course it’s an assumed name. Whose parents would name a child Bundtcake?” He grinned, and the people in the square around him grinned with him. Even Shasok, her tusks showing, chuckled at him.

“Why would you choose…”

“To get people to ask why I’d choose it.”

“No, that’s literally the only reason. It gets people talking.” He gestured, called up the magic, and froze the surface of the water in the fountain next to them. His golden eyes gleamed, and the soft light from them made his whole face look gentler, rounded out any rough edges and brushed away what shadows would have obscured him. Shasok had known others of his kind, but usually they were guarded, even arrogant. Few would name themselves after a dessert.

“You expect me to believe you chose that name just to get me to talk to you?”

“Not you, specifically.” He held up his hand. In it, a perfect frozen figure, a shard of ice in the shape of a wild cat. Looked it over. “What do you think?”

“It’s… fine?” The Orc woman looked confused. He laughed, a deep and affectionate thing, even though they’d just met.

“I don’t understand.” She took the small cat figure without having thought to, and was almost surprised to see it resting in her palm. It was a very good likeness of the one sitting at her heels, and she hadn’t even realized that until he’d handed it to her. But the clear surface with the faint tinge of white frost made it even closer to the blue and white panther at her side.

“Oh! Shop talk, I love shop talk. You see, I called up arcane power and used it to…”

“No, I understand that. I mean, I don’t understand why you made this, or gave it to me.”

“I… yes. But why?” Her voice was on the edge between confusion and frustration, which in an Orc is a pretty noticeably deep, gruff sound, the edges of her large canine teeth scraping together. He didn’t make the mistake so many others would have and laugh again, but his smile never wavered.

“We’re here in Dalaran. Far away from… well. You know as well as I do.” He stood from his seat near the edge of the fountain, his robes moving in a breeze she couldn’t feel, a slight chill in the air around him. “Walk with me? It’s not something I can say in a few words.”

She fell in behind him, her face impassive. He noted it. Ice is strong, but brittle. He remembered that voice, so long lost to him now, lost when the Scourge carved death into the belly of Quel’Thalas. Indeed, many things were both strong and brittle. The temper of an Orc, for example, could smash whole ranks of enemy soldiers but could snap from the smallest prodding. He waited until they were passing the former Sunreaver’s Sanctuary, now named for the Warchief of the Horde, that he spoke and his voice was somber.

“You’ve been to Darkshore.” Her eyes widened and she was about to speak — perhaps even shout — but he shook his head. “I’m not using magic. You have the look, in your eyes. You’re disquieted.”

“I serve the Horde.”

“And I’m sure you do it well.” He gestured, his right hand glittering with crystals of ice in the air. “We all do things we might not want to do. Hoping for the best. Wondering if we should have done them. When I was sixty I was ready to decide the course of my life, follow in my father’s footsteps. Become a baker. His father and his father’s mother had been as well.”

She gave him a look containing a great deal of doubt.

“No, really. We’re not all magicians. In fact, until me, no one in our family had any facility with magic since Dath’Remar himself walked with the sun all the way across the ocean. I come from a long line of servants who made tasty treats the old fashioned way so the great lords and ladies could husband their powers and still delight their palates. That’s all I ever aspired to.”

“It was. But there’s why I chose it, and why I wanted you to ask, which are different things.”

“You are a strange man.”

“True, but not specifically the reason. When I discovered I had the gift… well. I didn’t want to be trained. I didn’t want to learn magic. I certainly didn’t want to be down watching Zul’Aman for any signs of them stirring their silly Amani heads out to poke us when the Scourge came roiling out of Lordaeron and smashed their way right through where the bakery I was supposed to be at once was. But I trusted my teachers and my parents knew what was best. And… well, if I’d been that baker, in that bakery, I’d be dead right now. So maybe they were right.”

She looked down at the cat in her palm, condensation forming on the surface, tiny drops running down to her skin.

“I’m glad you liked it.” He looked up at the statue of Antonidas. “I helped Garrosh steal that damn bell, you know.”

“Helped take it right through Dalaran. Didn’t see any reason not to. What did I care? It was them or us, and I chose us. I’ve had a long time to reflect on that, and you know what? I still can’t think of what I’d do differently.” She looked up and met his eyes, saw the hollow behind the gentle words. “Sometimes, we do what we think we have to and can’t think of anything else, and it’s not… so I made myself a bit of a joke, and I made you a little nothing, and it’s what it is.”

She waited for more but he didn’t say anything, staring up at the statue.

“Thank you for the cat.”

“You’re welcome.” He pointed up at the statue. “That man had a hell of a beard, I have to say.”

She laughed and it shocked her and he grinned.

This character story was written as part of our supporter benefits. Want to see yours? Support us at the $25/mo level for one month or more and Matt or Anne will write it up.