Hands on: Diablo Immortal is diabolically fun and faithful to Diablo

After today’s surprise announcement of Diablo Immortal, Blizzard’s new Diablo game coming to mobile devices, I was delighted to find they had demos available. I picked up the Android device and had more fun than I thought I could with this game.

The Barbarian, Monk, and Wizard characters were available to choose from to run through an outdoor area and a dungeon. I chose a Monk since that is my main in Diablo 3. The controls were fairly straightforward and an on-screen tutorial shows you what buttons are available. On the bottom left is an invisible joystick for movement and on the right, the far more interesting character abilities. 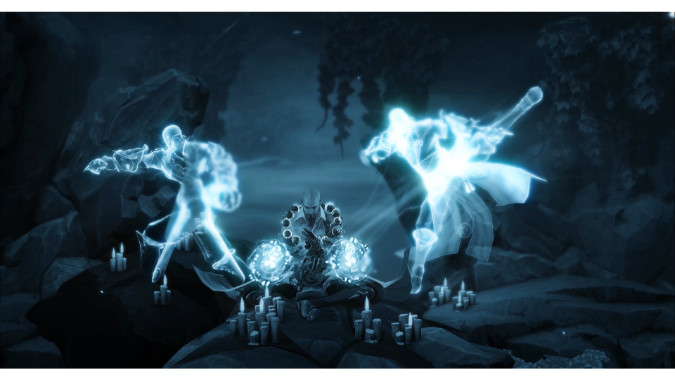 The Monk’s main attack, Fists of Thunder, is the largest ability button. It allows the Monk to teleport to nearby enemies and attack three times. This ability helped in cutting down on the amount of movement I needed to accomplish on screen. My Monk automatically faced any opponent when this ability was used so I had no need to constantly be swiveling around.

The other four abilities were on smaller buttons surrounding the main attack button. Each one had its own cooldown from a few seconds to 10 seconds. These were also Diablo Monk abilities that you may be familiar with: Wave Strike fires a ball of AOE energy at a group of opponents; Flying Kick propels the Monk forward damaging all in his path; Eye of the Storm pulls enemies to you in a large radius; and Seven Sided Strike deals a large amount of damage in 7 hits to enemies in a medium-sized area. 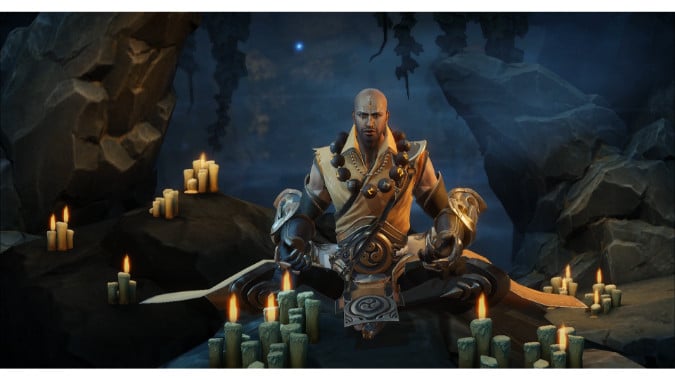 Used together, these abilities allowed me to clear large amounts of enemies in a short amount of time. I used Wave Strike to soften up a group at range, then Flying Kick to close the distance. Next was Eye of the Storm to pull all the enemies next to me so I could clean up with Seven Sided Strike. If there were any left, I used Fists of Thunder to finish them off or at least wear them down until my other abilities come off cooldown.

If I got in too far over my head, I had a health potion button on a short cooldown timer (15 seconds maybe). I could also use my Flying Kick to dash away. And when I was done, I picked up my loot and moved on. Though I was rewarded with a fair amount of equipment, the Inventory screen wasn’t available in this demo, though any upgrades would auto-equip. 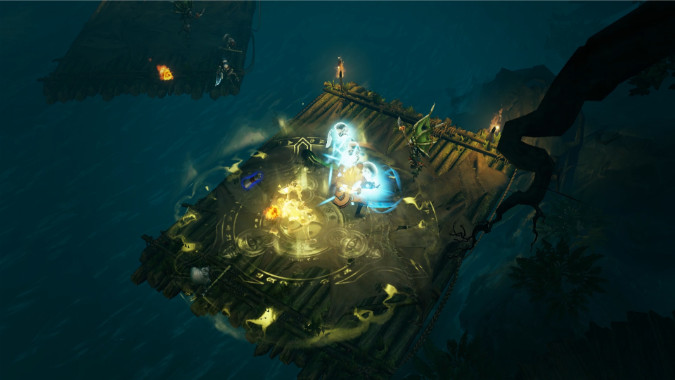 As I fought my way through the outdoor area, it really did feel like Diablo. The music, the sound effects, the monsters, the graphics all come together in that seamless way like they do in Diablo 3. Sometimes games have to make bad sacrifices to work on the mobile platforms, but I didn’t find it so in this demo.

I came across familiar foes like Fetish Assassins, Oozing Slimes, and Ghastly Haunts. I found health pools and shrines that buffed me temporarily. I opened up chests and scooped up the loot (via the autopickup function). These are all familiar tasks from D3 and wonderfully ported over. 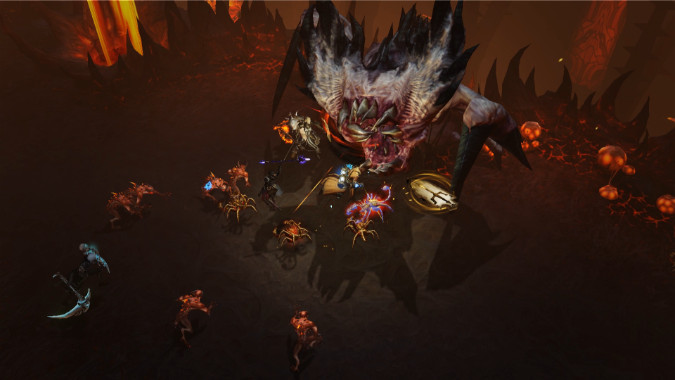 I found a dungeon portal at the far end of the outside zone, and when I entered it asked me if I wanted to go in solo or with a party. I had briefly come across a Barbarian player who helped deliver swift death to the Fetish Assassins, but I knew I was on my own here.

I fought my way through the dungeon and to the boss, Purus the Decimator. He is far more difficult than anything I had fought up until this point. He had a very large health pool, waves of minions to send after me, and a directed attack I had to avoid. I probably went through 6-7 full cooldowns of my abilities, a few health potions, and a lot of dodging before I was able to bring him down. And, of course, he dropped a legendary!

I wasn’t overly excited when Diablo Immortal was announced at the Opening Ceremonies, but once I got my hands on it I changed my mind. It feels every bit like Diablo 3 and still managed to run smoothly on a mobile device. I’m looking forward to playing more when it comes out…Soon(TM).

Blizzard Watch is made possible by people like you.
Please consider supporting our Patreon!
Filed Under: BlizzCon 2018, Diablo Immortal, Diablo Mobile, Hands On
Advertisement