The Queue: The floor is now lava 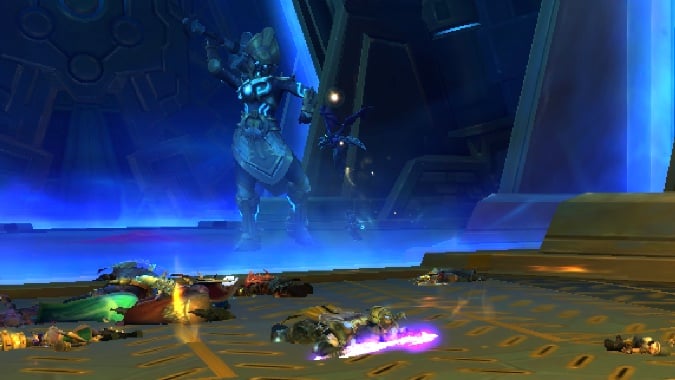 Learn from my mistakes, friends, and get out before the floor becomes lava. I realize that you may not always know when a segment of floor is about to become lava, but trust me on this one: when it does, it is bad. In WoW, you should always be prepared for the floor to become lava.

Q4tQ: Is Liz back tomorrow?

I say I’m here, but I know there are those of you who don’t believe that Mitch and I are actually different people and I doubt I can say anything to convince you otherwise.

If she answers this tomorrow, we get stuck in some kind of weird paradox of an answer. This is how the infinite dragonflight is created.

But if we could command this new Infinite Dragonflight, imagine the power in our hands! The power to shape time itself!

Well, that and probably destroy a lot of stuff, but with power like that, how bothered are we by a little collateral damage? Unless we accidentally do something that causes us not to exist, which would also cause us not to be able to create the Infinite Dragonflight which causes us not to exist… and, yeah, it’s that paradox that’s probably going to be the bigger problem.

Okay, let’s get to some actual game questions now.

Should I be comparing the crucible of storms to the Trial of Valor in the sense that it will be short and “quick,” but be more story lore than gear?

There are just two bosses — The Restless Cabal and Uu’nat, Harbinger of the Void — so it’s definitely going to be a zippy raid. It seems to be a continuation of the Alliance story in Stormsong Valley, and we’ll probably learn more about what N’Zoth is up to, though we don’t have any specific story info yet.

Q4TQ: I’m curious, where is everyone right now with their Heart of Azeroth azerite level?

I’m at 30, but I haven’t particularly gone out of my way to farm AP. I can’t stand Island Expansions. I think I did them all once, then couldn’t be bothered — they’re so boring. But I wasn’t sure if 30 is considered behind, or average.

Mine is a truly pathetic 25. I know it will make me more powerful, but grinding artifact power is just very hard to care about — particularly since my AP progress doesn’t even show on my UI. (If you have an addon that replaces your experience bar, you don’t get a progress meter for AP. I use Dominos, which has a bar specifically for AP that worked in Legion but not in BfA.) So to level up my Heart of Azeroth I would have to grind island expeditions and world quests in order to make progress filling a bar I can’t see. And when I fill it up, I might earn a reward in a new Azerite trait or I might not, and then I would just start filling the invisible bar again.

It is really, really hard to work up enthusiasm for that, so here I am.

For this expansion, Blizzard clearly wanted the Alliance to be dominant in the Eastern Kingdoms, and the Horde to be dominant in Kalimdor. They went as far as destroying Teldrassil and the Undercity (but they didn’t do anything about Silvermoon or the Exodar).

Q4TQ: Do you think this is a trend that will continue in the future? Do you see them creating a new home for the Night Elves in Gilneas, or in the Plaguelands? Having the Blood Elves lose Silvermoon, and their Sunwell? Having the Forsaken begin plaguing the crap out of Feralas and settling there?

I don’t think this is likely, for a few reasons.

I don’t think Blizzard wants to have another Cataclysm. They’ve had a small one with the destruction of two capitol cities, but the more they change, the more they have to change. Maybe they phase everything. At what point do the zones need to be torn down and rebuilt to make sense with the current story? If Blizzard wanted to do it, this is a great time for it, since the world as it stands is Garrosh era… but that would be a high-effort endeavor. My guess is that they’d rather focus on new content than rebuilding old content, and that means leaving the Cataclysm world in place for the most part. And for as much as I’d love to see the game world express a single, coherent story, I’d rather have brand-new content for my main instead of a revamped Feralas for my next alt. Or even a phased Feralas which I’d probably never actually visit.

I also don’t think Blizzard wants to lock us into just one part of the world. Zones have quests for both sides and pushing the Kalimdor for the Horde / Eastern Kingdom for the Alliance thing does encourage you to stick to “your” continent, unless you have compelling reasons to do otherwise. Heck, we’ve destroyed two Alliance ports now with the destruction of Teldrassil and Theramore. Even with phasing, cutting off those routes and making it harder to go back and forth just means we won’t go back and forth. I don’t think that really fits the spirit of the game — Blizzard wants us to explore and see the whole world, which you can see in BfA where they have faction-specific continents but still have quests that send them into enemy territory.

Then, it locks them into this faction storyline long-term, with very clear battle lines drawn out and an ocean between them. If in the long run you are looking for a more cooperative relationship between the Alliance and Horde — which Alex Afrasiabi recently suggested might be possible — those battle lines won’t help.

But, really, who the heck knows. Blizzard sometimes zigs when I expect them to zag, and maybe this expansion is going to be a big excuse to tear Azeroth to pieces and build it up again. We’ll see.

And that’s all for today, everyone, because I’ve run out of questions I have answers for. Enjoy the rest of your day, but know that I am expecting you all to meet your daily comment quota so that Adam has questions to answer tomorrow. I am watching you, so be good.