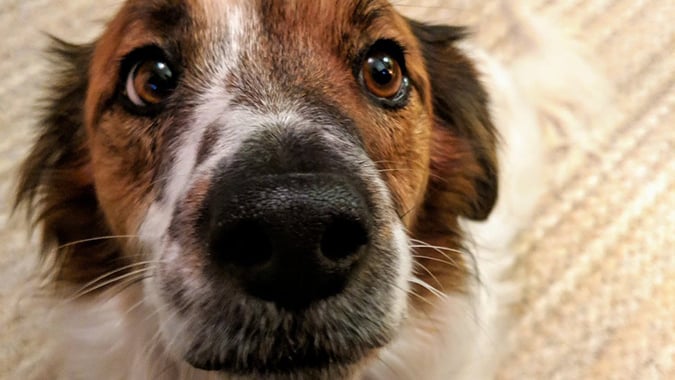 I have a dog now. I’ve never actually been a “dog person,” but I’ve always had a soft spot for Badger — he’s one of my sister’s dogs, but he’s always wanted to be a solo house dog and he gets to be that here. He also gets to be relentlessly spoiled and I doubt he’ll object to that. He’s currently curled up right next to my chair, nose on my feet, where he will happily stay as long as I let him.

I have a feeling I’m going to be a dog person in very short order. Anyway, let’s get to your questions!

Hmm. I notice the Naga in Nazmir draining the frogs for their magic say “We were so close to never thirsting for magic again.” when you kill them. Do the naga have a similar addiction to magic to the BElves and the Nightborne? If so it makes me even more sympathetic to Tyrande’s feelings about the Nightborne. Elves and arcane just don’t seem to mix well.

They definitely have the same thing going on. Lady Vashj actually pointed out the naga suffered from an addition to magic to Kael’thas in Warcraft 3. It’s how he realized that’s what his people were suffering from, and what they needed a cure for — magical withdrawal.

In other words, the Withered aren’t suffering from magic withdrawal — they’re literally starving to death. They look for sources of arcane magic to feed from, because that’s the closest thing to the Nightwell’s energies.

Thankfully, the fruit of the Arcan’dor managed to free the Nightborne from their condition. They’re no longer biologically dependent on the Nightwell for food, and they can eat just about anything they’d like, I’m assuming.

But Tyrande had more than enough examples of elves resorting to betrayal or monstrous deeds in the name of arcane addiction to be rightfully wary. The Nightborne may not have been the same as the naga or the sin’dorei, but they seemed so similar that they were worthy of that additional caution in her eyes.

Besides, we saw how quickly Grand Magistrix Elisande flipped sides to the Burning Legion when provoked. It was eerily reminiscent of Azshara’s siding with the Legion during the War of the Ancients. Given that, it’s little wonder Tyrande had some reservations regarding the Nightborne.

So I watched the D.Va short this morning again, and I got to wondering, Was/is South Korea still fighting the Omnics after the war ended?

Yes — they still are, in fact. About twenty years ago (in Overwatch’s timeline), South Korea was attacked by a colossal omnic monstrosity that emerged from the depths of the East China Sea. The South Korean government actually developed the MEKA units because of this threat — they were originally drone units, until the omnics managed to disable the drone-control networks. That’s when pilots were introduced, including D.Va. It’s pretty much their job to deal with the omnics when they threaten the city.

According to some comments on Wowhead, they certainly do — although I haven’t tested it myself. The speed boost from the Hoofplates doesn’t stack with the existing passive speed bonuses Paladins and Death Knights get, however.

How do you feel about the trajectory of the story in terms of predictability? Does it feel a little bit too on the nose and predictable overall? I.E. ”Oh another rebellion, Sylvanas is killed/removed, Alliance and Horde hug it out again to kill some Old Gods?”

I mean…if you want to look at that way, you could call it predictable. But I don’t think it’s headed in that direction — we aren’t due for a Garrosh 2.0. We’re still in the beginnings of the story, and we don’t know what direction that story is going to take by the time Battle for Azeroth is over. Given what Sylvanas has done so far, I highly doubt we’re going to run into a case of the Alliance and the Horde just hugging it out in the end. Theramore was tiny in comparison to what happened to Teldrassil.

The problem with making predictions is that you kind of have to draw on what’s happened before. Everything here looks suspiciously similar to events that really weren’t all that long ago, storyline-wise, so everyone is assuming we’ll see something similar to that. I don’t think Blizzard is going to go that route — I’m guessing they’ve got some pretty crazy surprises up their sleeves, and by the end of this, we won’t be comparing it to Garrosh at all.

I could be wrong of course, but that’s the nature of predictions — you never really know if you’re on the nose or not.

Q4tQ: who do you think is the most interesting character right now in WoW, in terms of development and future possibilities?

Taelia Fordragon. I mean…she’s the daughter of the current Lich King. We got that big reveal, and then we moved on from that particular story thread. But that lady is one heck of a plot point waiting to be revisited, and I can’t wait to see what happens with her. Is she going to learn what happened to her father? Is she going to try and reunite with him? What’s the Lich King going to do when she shows up? Is that going to wake up some essence of humanity in the Lich King, or is it going to demonstrate just how far Bolvar’s fallen since he put on that shiny hat?

What’s the easiest way to get rep?

That kind of depends on what kind of rep you’re going after — obviously reputation from earlier expansions is easier to grind than the current one. But if you’re talking Battle for Azeroth, the easiest way is just to do a daily clear of all World Quests applicable to the faction you’re trying to grind, complete missions that reward rep for that faction, and if there are any quests involving that faction, make sure you do those too. Oh, and don’t forget to clear Emissaries when they show up on your map, you’ll get a sizable chunk of reputation doing that as well.

If you’re looking for the lazy way, just do the mission table missions, and make sure you clear your Emissaries on the map when they pop up. It will take you longer to reach Exalted that way, but it’s decent rep with minimal effort on your part. And don’t feel bad if you take this route — it’s what I’ve been doing with my alts, because I just don’t feel like putting in the time to do all that World Quest clearing.