Know Your Lore TFH: For want of a nail

This edition of Know Your Lore is a Tinfoil Hat edition, which means it speculates on in-game lore and isn’t to be taken as canon.

We talked about it last week. We know that she was a Draenei captured by the Iron Horde and forced to labor in their mines. We know she escaped alongside us and the survivors of our doomed — yet successful — expedition to stop an Iron Horde invasion into Azeroth. She watched her sister die to Ner’zhul, watched Velen sacrifice himself to save the Naaru Ka’ra from being the Dark Star unleashed by the Shadowmoon Orc tribe, and rose to the rank of Exarch. It was Yrel who led the Draenei against the Iron Horde in Shattrath, and Yrel who brought them into Tanaan Jungle. It was Yrel who stood against Archimonde and Gul’dan when the Orc Warlock traded his people’s souls to the Burning Legion.

But who is Yrel? We know what she lived through on the Draenor we visited, the one where events turned out differently than we know they did in our world — where Ner’zhul’s wife Rulkan did not die years before Ner’zhul was contacted by Kil’jaeden, where Garrosh Hellscream was never born at all. However, we don’t know if she existed in our own history, on our Draenor. Did she simply die, as so many Draenei did, when the Old Horde murdered their people and used their corpses as paving materials? Was she taken captive and worked as a slave? Did she simply never exist in our history? After all, there was never a Garrosh or a Thrall on that Draenor, it’s possible there was never a Yrel on ours.

There’s always been a strangeness to that Draenor, and its very slight differences. There are the Orcish Warlords, all of them familiar to us, and menaces like Gul’dan and Cho’gall and Teron’gar, later known as Gorefiend. We saw Durotan and Draka, but we now know that on that world, Durotan and Draka had a daughter and Grom Hellscream’s son had a different mother and is thus a different person than Garrosh. Each small change ripples through and creates a new place, a new being — our Velen is still alive, while their Velen sacrificed himself.

Frankly, I look over the fate of our Draenei — nearly wiped out by the Orcs as they became pawns of the Burning Legion — and wonder if it was the lack of Yrel that made the difference. We had figures like Maarad, which that Draenor appeared to have lacked — if there was an alternate version of Maraad, we never met him.

One possibility is that the Draenei of that Draenor actually benefited from Velen’s sacrifice. Velen was injured after the crash of the Genedar, and for many years he couldn’t fully control his Light-granted ability to see the future, to the point where he didn’t see the coming of the Legion in time. But the Velen of that world sacrificed himself to save K’ara and passed on the mantle of leadership onto Yrel, his student. Our Velen did not save K’ara — he merely managed to shield some of his people from the Dark Star when Gul’dan used it to defile Karabor and transform it into the Black Temple. Why?

Was it because our Velen didn’t have a Yrel to pass the mantle on to? Without a protege, he had to accept that K’ara could not be saved. And that might well have made all the difference, because without Karabor to stand as a rallying point, our Draenei were nearly wiped out, while the Draenei of Yrel’s world defied the Shadowmoon Clan and managed to save K’ara and thus had her power serving to protect one of their most sacred sites instead of defiling it, as it was in our history. There was never a Black Temple on that Draenor.

One theory I have is that the reason there was no Yrel on our Draenor is because she died in place of her sister Samaara.

We saw when we went to Shadowmoon Valley that before they could tap into the power of the Dark Star, the Shadowmoon under Ner’zhul captured several Draenei, including Yrel’s sister Samaara, to use in their dark rituals. We know that in our timeline, Gul’dan succeeded in summoning and unleashing the Dark Star, and as a result we can infer that they engaged in a similar period of abduction and sacrifice of Draenei victims… and without the presence of adventurers from an alternate timeway to stop him, he succeeded in unleashing the Dark Star.

Perhaps that’s because the wrong sister died. What if, in our timeline, it was Yrel who died? And Samaara, the older of the two, who was forced to carry on in her sister’s absence?

Samaara had cared for Yrel as long as Yrel could remember. She was both sister and parent to her younger sibling, and while Yrel was strong in the Light to the point where Velen chose her to be an Acolyte, we hear nothing of Samaara being also gifted in the Light, or at least not so much that Velen took notice of her. A kind and loving soul, yes, but not the prodigy her younger sister was, and losing Yrel would have been like losing her own child. After all, she raised Yrel after whatever unknown fate befell their parents. It’s possible they died in the Genedar crash, or during one of the earlier escapes from the Legion. Samaara would have been far more likely to need longer to grieve. Even if Yrel’s death filled her with the same sense of purpose as her sister, she lacked the same affinity for the Light and wasn’t a candidate to replace Velen, so on our Draenor he was forced to retreat from the Dark Star instead of purging K’ara. 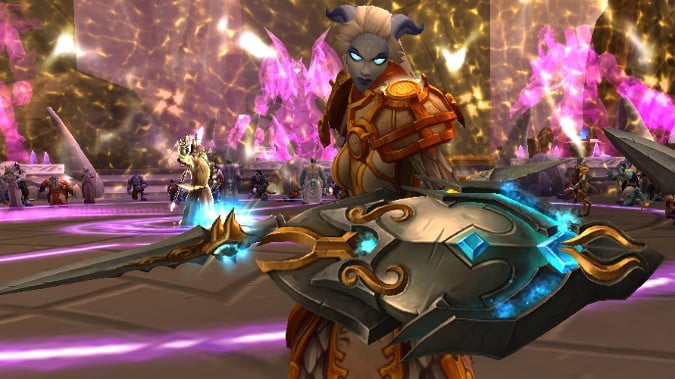 Divinius and the Light’s Chosen

So imagine, then, what Samaara would be like now. She would have wanted to take up arms and defend her people as they suffered unbelievable hardship at the hands of the Orcs, but she wouldn’t have been immediately able to fight as the Draenei were forced to retreat and hide. If she managed to survive at all, she would have had to be tough, smart, and lucky, as well as blessed by the Naaru. She may have ended up one of the Broken, of course, or died herself as so many of the Draenei did.

But when I went to the Exodar in Legion and saw Divinius for the first time, I really began to wonder. She reminded me of Samaara almost immediately. They have very similar horns and skin tone, and the difference in hair color between Samaara and Divinius could be explained by the process of learning the Holy Light and becoming a member of the Light’s Chosen — a process that Yrel, as an Acolyte, wouldn’t have needed to undergo. And Divinius’s more stern manner and approach could easily be explained by the fact that in our timeline the Draenei came much closer to extinction than in Yrel’s.

Is it as simple as that? Did a different sister die, and thus, a whole different series of events came to pass? For want of a Yrel, Karabor was lost… but since Velen lived, and lived long enough to see his own son die as an Eredar, it’s possible that his more aggressive stand against the Legion on Argus would only be possible with Yrel dead. Only with Yrel not being there could we start the process that leads to the Draenei as we have them now. It’s at least possible.

It seems unlikely we’ll ever know, but perhaps someday Yrel will step through the portal to our world and we’ll see her meet our Velen, our Divinius, and learn some secrets about who she really is.