The Queue: Can I just…have a boat? 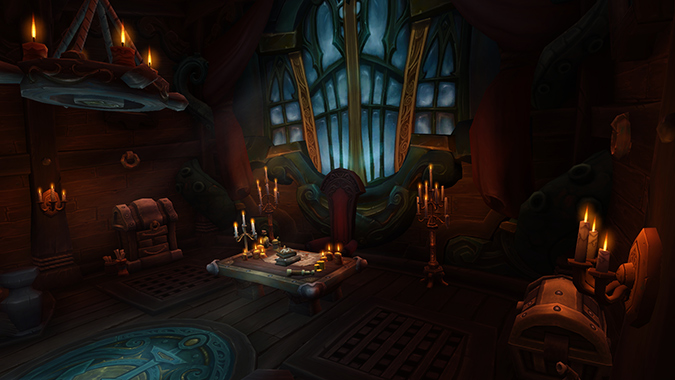 This expansion has given us some of the most lovingly-crafted, well designed ships I’ve ever seen. They’re a far cry from the stale and mostly-empty pirate vessels that litter the coasts, you know? Forget the fancy mounts, the pretty horses and cool raptors and frogs. I’d like a boat, please. I mean…if we can’t have player housing, can I just have a ship to call my own? Maybe? Seriously, look at that thing. It’s gorgeous.

And now, let’s look at your questions, and then answer them!

How does upgrading the bonus flight paths work? I did all the missions on my Hunter, and now they are available to my Priest. Are the upgrades not account-wide and I just wasted all my resources thinking they were?

While there’s an account-bound map you can buy to unlock flight paths, you’ll still have to do outpost upgrades on each character — those aren’t account-wide. And even then, not all flight paths are immediately unlocked. Areas that require questing to unlock will still require that questing. The reason they made that account-wide flight path map was specifically so people didn’t have to spend forever riding around and gathering flight paths if they’d taken an alternate route to 120, like by doing island invasions or PVP.

Odd thing I noticed this evening. i was doing the War Campaign on my gnome (levelling ready for 8.2 heritage armour) and there was a quest to kill Forsaken soldiers. Some of them (not all mind) say ‘Thank you’ as they die. There’s definitely signs that not all Forsaken are willingly following Sylvanas and Nathanos any more…

Those signs have been there all along, in various aspects — heck there was an interesting quest chain in vanilla where you were sent after Forsaken “traitors” who turned out to be a small group that just…weren’t super invested in what Sylvanas was doing, and wanted out. But it isn’t always just a sign of not wanting to follow Sylvanas. Some of these Forsaken would just like to…you know, pass on. They’re tired — tired of being undead, tired of being magically kept alive, tired of, you know, existence in general.

In those cases, it’s got nothing to do with Sylvanas. They might agree with what she’s doing, they might not. But some of these people have been kept alive since the Third War. They’re former citizens of Lordaeron that watched their beloved kingdom fall to its current state of decay. They have no vested interest in continuing their lives, such as they are. Their lives ended when they died — and they’re expected to be living this second life of suffering and torment for eternity. They want out, and really, who can blame them?

QftQ: Do you think Therazane would try to flirt with Magni?

Therazane doesn’t exactly have the…happiest relationship with the Titans. I don’t know if she’d be too keen on batting her eyes at the speaker for one of them, particularly since Magni seems to be fairly devoted to Azeroth in general. And beyond his duty as the speaker for Azeroth, Magni was at one point…you know, one of the mortals that wander the world outside of Deepholm. A mortal like the mortals that killed her only daughter in Maraudon.

Basically, Therazane isn’t exactly on the happiest of terms with a lot of creatures, and I’m pretty sure Magni wouldn’t exactly charm her, despite his upgrade from leader of the dwarves to diamond dude communing with the planet.

Q4tQ: Does anyone know if Seal of Wartorn Fate will be useable in the new raid? If so, I intend to stockpile them.

They should be, yes. It’s been a while since we’ve had multiple types of re-roll tokens in an expansion. I think Warlords was the last time we saw multiples, and there were only two — and the second one wasn’t added until the final raid tier of the expansion. I think Blizzard just wanted to keep it simple, rather than introducing a small collection of various tokens like we saw back in Mists. So you should be safe to “stockpile” — but keep in mind you can only carry five of the things at max.

Is there a way into Waycrest Manor if you haven’t finished those quests or will I need to finish Drustvar to access it on my hunter? Someone in guild chat said there is a way in but couldn’t tell me where.

Technically, I don’t think so — but I did a little exploring on my 110 Druid alt, and found that for whatever reason, the manor gates were open for me. I don’t know if it’s because I fully completed the Drustvar quest chain on my main already, or because I used the 7th Legion Scouting Map to unlock all those flight paths I mentioned above, but the barriers just weren’t there.

In other words, I don’t…actually have a complete answer for you, other than to say you will need to unlock Drustvar fully at least once. If you’ve done it once, it may not be necessary to do it again. But again, I’m working with an alt that used that account-bound flight path unlock, and I’ve unlocked it on my Alliance main already, so I don’t exactly have the clearest path to figuring that out. Sorry!

Q4tQ: Should Druid animal forms have gender variants, without using glyphs like Glyph of the Doe?

I really liked that they introduced the alternate travel form for female Druids, but I also liked that they made a glyph for it. People have been using the original travel form for years — maybe some people like that form, and they’d like to keep their antlers regardless of what gender their character happens to be. If they want to ditch them, they can use the glyph. Admittedly I think it’d be nicer if you could just simply choose between options at the Barber Shop — I mean, they can do everything else, why not make that one of their services, too?

But as for the other forms…I mean sure they could make gender variants. That might be cool. But how do you make say…an eagle look like a boy eagle versus a girl eagle? How do you make a cat look like a girl cat versus a boy cat? You can pretty easily pick out a stag from a doe in the wild, but if you’re looking at a sea lion, can you really tell what gender it happens to be just by glancing at it? At that point, are we just looking at color variants — and if they’re just color variants, do they really need to be gender-specific, or just, you know, available to everyone without slapping a gender-defining label on them?

I don’t really have an answer to any of those questions beyond “Druid forms are pretty cool, and we should have more variant appearances for them because that would be even cooler.” Which…well, I think almost every Druid player out there can agree with that.