With the first Darkmoon Faire since Patch 8.1 arrived, you can — once again — add levels to professions by doing quests at the Faire. The revamp of professions — which broke each expansion into its own leveling section — was major and needed. If you want to level, say, Burning Crusade‘s professions, you leveled just that expansion. Leveling through older expansions did nothing to level current content — or any other expansions’ — professions.

Gone is the struggle to level through one expansion’s recipes to get to new content. If all you want to level is Battle for Azeroth, that’s what you level when you go to a trainer in either Boralus or Dazar’alor. It’s meant to streamline the process of getting to current crafting.

This was a good change to professions. It was such a slog to get to Legion recipes — particularly if you were not maxed from Warlords of Draenor. But you almost had to go to the Faire to get those five points every month in order to max Legion recipes. This made the Faire a must-stop for any max-level character. When Battle for Azeroth arrived, this +5 was removed.

With only 150 points to level to maximum — and a fairly decent method to accumulate those points — going to the Faire wasn’t necessary. Still, as easy as 150 points might seem to be, getting from one to 150 still wasn’t always the easiest, and those +5 points were still useful in getting over certain profession hurdles.

Thankfully, Darkmoon Faire skill points are back for Battle for Azeroth characters. I took my Tauren and did the Blacksmithing quest, and despite not being max-level, I was able to get the quest and complete it. My Tauren is not my main so heading to the Faire for that +5 boost is something I think I can remember to do every month. It’s not much, but it might help get to the next level. 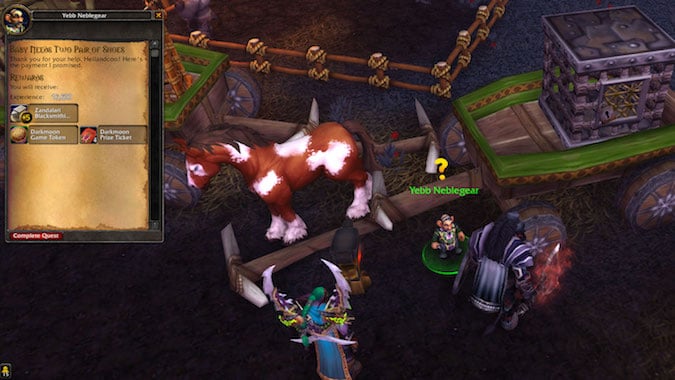 My guild does a monthly transmog contest. This month, we have an “anti-transmog” theme. Every piece of gear needs to be crafted, and guildies will wear their new outfit — i.e., not just transmog it. You can’t craft from Legion or Battle for Azeroth — it all has to be older expansions. We are drowning in some materials and this is, I hope, a way to use up some of the stash.

I’m leveling my low-level Leatherworker and counted on the Darkmoon Faire for a few skill points. My focus is on Burning Crusade’s, as there are some nice looking chestpieces in that era. However, when I took her to the Faire, my skill points were applied to the expansion she currently is — Wrath of the Lich King. While that is nice, it’s not where I would have liked the skill-ups applied. Ironically, when I did the Skinning quest, my skill-ups were applied to Mists of Pandaria skinning. I prefer if we had the ability to apply skill points to a particular expansion, as it would create more incentive to utilize the Faire’s profession quests.

While I do like the revamp, there is something I miss about the start-to-finish approach to professions. It used to be that, when you leveled a Classic profession to max level, the trainer told you where you needed to go to pick up leveling through Burning Crusade’s. That doesn’t happen now. You’ll probably need to use the resources of an outside website to know where to go for the next expansion’s trainers. Because I’ve been playing as long as I have, I knew I needed to go to Outland for Burning Crusade’s trainers. If you haven’t leveled through all expansions, this won’t be common knowledge to you. I’d like to see that return.

Blizzard Watch is made possible by people like you.
Please consider supporting our Patreon!
Filed Under: Battle For Azeroth Professions, Crafted Gear, Darkmoon-faire, Professions, Transmog
Advertisement