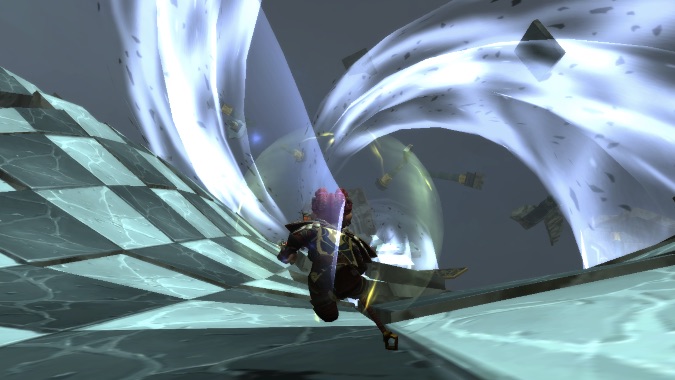 Let’s get to the question, Quevians!

Q4tLiz: How are us Gnomes going to get through the Mekkatorque fight?

Do you think I can ask my raid group if I can sit this one out for moral grounds? Maybe I could say I have a headache or need to wash my hair… every time we get to Mekkatorque. That’s believable, right?

Then I can just pretend it never happened and everything will be fine.

And if ignoring it doesn’t make it go away, well, that’s what wine is for.

Do you think we’ll ever get a better color palette for guild tabards?

While I am fond of my guild’s bright green and gold tabard, the primary colors and simple designs on tabards seem increasingly out of place. Graphical advances have hit almost every other part of the game, and yet tabards remain just as they did on launch day. They’re overdue for a revamp, imho.

What is one plot point you’d change about Warcraft Lore?

Thinking in purely World of Warcraft terms, I would go back an expansion and prevent Vol’jin from dying in Legion. I know, Varian’s death was a big deal, but I think Vol’jin’s death shaped the story more.

If Vol’jin survived, even if Varian died — and we were facing some pretty overwhelming odds there, so not everyone was going to walk away — we would be dealing with a different Horde. I think the Alliance and Horde would have kept lines of communication open rather than going on a war footing if Sylvanas weren’t in charge. We might have been able to go into the Broken Isles as a united front. And we certainly could have avoided a full scale faction war afterwards.

Maybe it wouldn’t have changed as much as I think it would have. Sylvanas would still be there, and she would have her own motivations even if she wasn’t in charge. But I think we would have had a chance to get out of this without faction conflict breaking into war.

And if I could change two things, I would go back to Burning Crusade and never do the Horde quest in Nagrand in which I cheered up Garrosh Hellscream and convinced him that his people needed his leadership. Hey, don’t look at me like that. I didn’t know where this was going, and I got XP for it.

Q4Q: Do you want more single-player modes in Blizzard games? Stuff like Dungeon Run or vs AI or… well, anything, really. I’d love an AI PvE mode in Overwatch, personally.

Absolutely! I like playing Hearthstone, but I really love the single player adventures. They’re a unique challenge, and even though they can be frustratingly reliant on RNG, I usually find them fun. And I frankly spend a ton of my WoW time just chilling and doing solo content. Sure, I’m a healer, but that doesn’t mean I necessarily want to heal people all of the time.

So I’m all for more single-player options, and the big fish there is certainly Overwatch. There are so many interesting places and characters in Overwatch, but it’s all multiplayer all the time. I think a lot of people would love to have access to that without the multiplayer brawl aspect.

Also, is there a particular healing class in your experience that would struggle more in Dazar’alor, in your opinion?

It’s hard to say this early, because I’ve only been once. However, Warcraft Logs is showing Holy Priests and Mistweaver Monks dominating the healing charts in Dazar’alor, which I’m not surprised by. Both classes are very versatile, with the ability to focus on single target or AOE healing as the situation requires. That kind of flexibility is really helpful for new content when no one quite knows the fight yet.

And I think that’s why you see so few Druids and Paladins topping the lists. It’s not that they’re bad, but they aren’t quite as versatile. Paladins excel at tank-healing and spot healing, and have a bunch of strong cooldowns, but don’t have as much AOE as other healers. Druids excel with HOTs that can keep an entire raid going, but placing those HOTs requires knowledge of the fight — Druid healing is more about knowing who will take damage and placing heals accordingly rather than responding to damage taken. That makes a big difference when we’re all tackling new content.

Again, it’s not that those classes are bad. They just play differently, and they play in a way that can be a little more difficult where new content is concerned. We’ll have to wait a while to see which healers really are the must-haves in Dazar’alor.

Though the idea of a Yogg-Saron sized Murloc is frankly terrifying, avoiding Yogg-Saron is one of my big life goals. Bring on the Murlocs.

And that is all for today, my friends. Until next week, this is Liz, signing out!