The Queue: We’re on fire 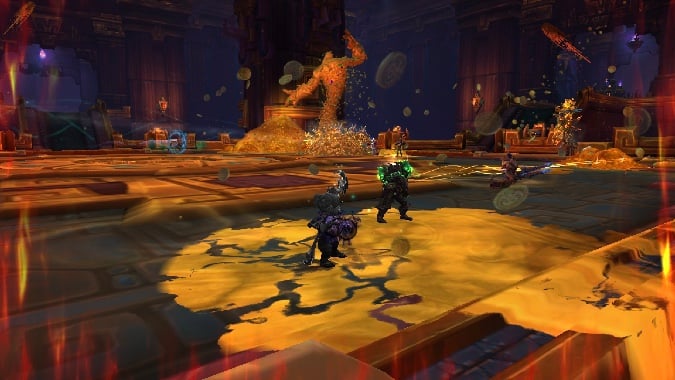 This raid tier we get to fight a literal pile of gold. I don’t know what to say about this other than the fact that this utter ridiculousness is my favorite fight.

Where’s a good place to watch the Mythic raiding race? I’ve never kept on top of that sort of thing before, but it seems to be gaining a lot in popularity recently. Websites or YouTube; whatever’s best. Links if you got ‘em. Much appreciated. :)

Raider.io is a great place to keep track of the state of the race, with a list of which boss each guild is up to. You can click on guilds to see rosters and whether anyone’s streaming — it’s really nice. Mythic Dazar’alor just opened up in Europe, so Method and the other European guilds are playing catch-up with the players who spent all day Tuesday zerging the raid.

The reason following the race has become a thing is because of that streaming. The top guilds have typically kept to themselves, their strategies a guarded secret until their world firsts were proudly claimed. Method broke tradition by livestreaming Uldir, and being able to watch the fights in action has really changed the world first race. Now Method and Exorsus (who claimed the #1 and #3 place on Uldir, respectively) are both streaming Dazar’alor, and so are a bunch of other guilds. Limit (the #2 guild on Uldir) is the only top-tier guild eschewing streaming.

I spent a good portion of the Tuesday watching Big Dumb Guild work through the raid, watching CherryVodka on Twitch. Today I’m keeping tabs on Method, though — particularly seeing their Mistweavers in action. However, check Raider.io for who’s streaming and pick your favorite to watch. It’s the best way I’ve found to keep track so far.

One note: the language on these streams can run the gamut. Some are chill and focused, some are frustrated after too many wipes, and some are talking about their sex lives. It’s the internet, and who knows what you’ll run into when you click a link, and I heard a few things I can’t unhear.

Q4TQ: when do you think Blizzard will add a Tank spec to Shamans?

a) soon
b) Blizzard soon™
c) maybe one day, in a future far, far away
d) never (pick this option if you’re a heartless monster)

Though, yes, I approve of Shaman tanks. They have shields and wear (relatively) heavy armor — they’re perfectly suited to tanking already. I can’t explain why, but Shaman tanking just feels right.

I’m not sure Blizzard agrees, though.

Q4TQ: If there was a vote to strip Anduin of his title of high king of the Alliance and put Tyrande in charge in his place, who would you side with?

I’m not exactly a lore hound, and this expansion I’ve really been wondering… why is the King of Stormwind the leader of the whole Alliance? Anduin is young, flanked by far more experienced leaders like Tyrande and Velen. Why do they all look to him for leadership?

With the 8.1 Tyrande story, it seems like perhaps they aren’t. We saw Tyrande go to Anduin for help, and when he said troops couldn’t be spared, she went her own way — and the rest of the Night Elves with her.

Are we starting to see cracks within the Alliance? There is the clear start of a civil war within the Horde right now, but I wonder if the Alliance doesn’t have its own problems on the horizon. What would Alliance infighting look like? And what would the Alliance look like without the Night Elves?

People who visit LFR on week 1 have no self esteem or respect for their own time. Love yourself, let the trolls learn the fights together so they can help guarantee victory in a few weeks.

(I’m mostly kidding, but really, don’t do that to yourself, good people of the queue!)

Oh, and as always, make an instance-chat-free chat pane, it’ll save your sanity!

I was pleasantly surprised: I ran LFR yesterday and we cleared it within a half hour, no wipes. Fight mechanics aren’t entirely ignorable in LFR, but everything does less damage so there’s a lot more room for error… which you’re just going to get in LFR.

Also I wrote a mini-guide for Dazar’alor LFR for those of you who are diving in. Please read it and thus validate existence. Thanks.

It is snowing here and you guys are talking about video games! What kind of blizzard watch is this!?!?!?!

We’re doing the only smart thing to do in the cold weather: staying inside and playing video games.

Q4tQ: how are Kelsey and Keeshan doing? Did they… fondue?

Kelsey can do better. That is all.

And that’s all for now, Queue frens. Talk amongst yourselves, and I’ll see you back here next week.