Off-Topic: We rate the three Pokemon Sword and Shield starters 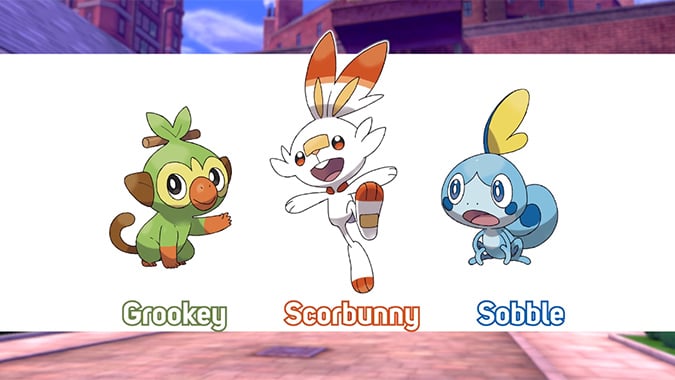 Pokemon Sword and Shield have finally been announced. The two new games for the Nintendo Switch will feature a whole new generation of the popular creatures, and of course, three new starter Pokemon.

Our contenders are Scorbunny (Fire), Sobble (Water), and Grookey (Grass). One looks like a bunny, one looks like a tadpole, and one looks like a monkey. As with any main entry in the Pokemon series, you’ll have to decide on which one you’ll begin your journey with. We’re here to help you make that decision when the game comes out in the fall.

Here’s the starters ranked from worst to best.

Grookey looks like a monkey with a beak. Grookey is actually the Pokemon that looks like a 4-year-old drew it. It also has triangular ears and leaves on its head — just in case you forgot it was the Grass starter. What are its special moves from the trailer? It can climb.

Grookey is pretty uninspired. It’s a round, big-eyed primate that squeaks. Grookey is the Pokemon that feels like it was created to make you go “aww!” That might not be a bad thing, but it’s 2019, and I think we should have higher standards for Pokemon.

You might have to squint when you see Sobble coming because the tadpole-looking Pokemon can apparently go invisible. It’s hard to stop squinting though because I’m pretty sure Nintendo designed Sobble around the Surprised Pikachu meme. They also literally gave it the saddest name possible.

Sobble has to carry the weight of all of these things and still resemble Squirtle. It’s got that curled tail that our turtle buddy had so long ago. I can’t explain the fin-shaped thing on its head, nor the ability to go invisible. Everything about Sobble sounds timid, so maybe later evolutions will overcome that. Sobble is the wait-and-see sort of Pokemon starter.

Don’t let the name fool you, Scorbunny is a rabbit. Bunnies aren’t the name for anything but rabbits. Rabbits are adorable — you would know this if you followed BunnyArchive on Twitter. This rabbit has large ears, a weird bandage-looking thing on its nose and the ability to run so fast it creates fire. I love Scorbunny.

Scorbunny is like Sonic but without the years of garbage games to its name and way better ears. If Shenaniganza is right and Scorbunny turns into a soccer rabbit then I’m totally sold.