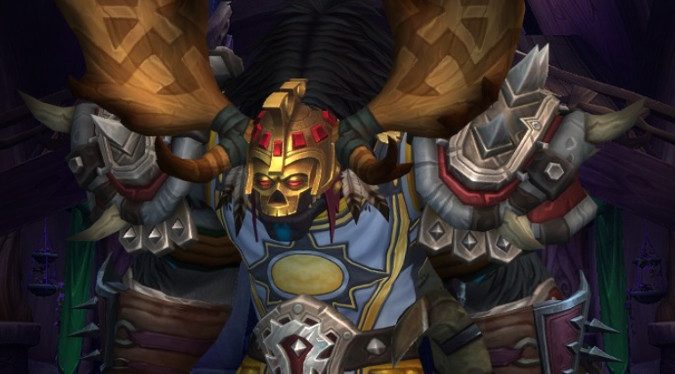 This character profile has been written for Kirigi, one of our supporters. If you enjoy it, you can check out the other profiles we’ve written, too!

“Breathe. Draw the string to your ear. Exhale and let go.”

He didn’t watch the arrow. He didn’t have to. It would strike where he needed it to, and he had other concerns. The Blood Trolls were in the thick fronds around him, trying to close in. The heat and the smell of standing water, the faint odor of decomposition… Nazmir was a hunter’s paradise, but it was all too easy to become the hunted there. He gestured, and Breya snarled and loped into the darkness beneath the trees, fur shimmering. The great wolf could be as silent as an arrow striking the heart, but as he’d expected, the Troll wasn’t — a gurgling scream and the sound of blood spraying onto branches told him what he needed to know.

The sound of feet sinking into wet earth to his left.

The crown of antlers atop his head almost snagged on a vine but he’d spent enough time in Nazmir now, he knew how to duck his head as he nocked back the next shot. Just like him, they were hunters, and just like him, they could in turn be hunted. In hunting him, they had made it a challenge. It was one he welcomed.

He knew the Alliance had a camp somewhere nearby. He had no particular animus toward them — they were enemies, of course, and while Baine certainly had his differences with the Warchief, he hadn’t declared the Tauren in opposition to her. So for now, Kirigi followed where her commands led. But today had not been about them. He’d simply wanted to stalk the great tree-height beasts native to this fetid basin, to watch them slowly crop fronds from so far up. It was rare for Kirigi to actually feel small and rarer still for the feeling not to mean danger to him, but the Brutosaurs were disinterested, and that made them fascinating. He’d watch them for hours if he could, trying to learn their ways as he had the ways of so many others.

He fired and passed behind two trees as the Blood Trolls hurled axes at where he had been, hearing Breya like a whisper to his left. He didn’t even have to gesture this time. Didn’t even have to look up, instead drawing another arrow and gliding around the trees. Looking for a gap, smelling the wet blood they’d smeared on their own bodies as it came downwind. Their mania, their religious fanaticism to their “Blood God” made them arrogant. They made the mistake of thinking because they lived in a place, they owned it, that it would bend to their will. That they were the masters of Nazmir’s swamps and bogs.

Kirigi knew better. No one owned the land. No one was ever its master. All you could do was listen and learn from it — watch its animals, study the way it shaped them. The beasts here were different from those he knew back in Mulgore, of course, but Kirigi had traveled far in the service of the Horde, had studied many creatures. He’d befriended Breya on another world. You couldn’t do that if you were still under the delusion that nature obeyed you. At best, it taught you… if you were willing to learn.

He fired and drew and fired again, missing once, hitting the other. The purpose hadn’t been to kill, but to make them move, send them forward. The larger of the two was screaming as it charged out of cover, brandishing a giant spear. It was massive, even by Tauren standards, one of the Troll berserkers who drank the tainted blood of their “God.” It was so busy screaming it didn’t see Breya until the midnight-blue blur smashed into its side, teeth clamping shut on its throat and tearing. Kirigi made sure to fire again at the one he’d hit, offering a prayer of thanks to Cenarius. His hand reached up and stroked at his new antlers, the gift a grateful demigod had bestowed.

He made sure Breya hadn’t accidentally swallowed any of the blood from the dead Trolls. It was foul stuff, and it had very little to do with nature as Kirigi understood it. Satisfied that they were all dead, he took a moment to drag their corpses out of the water. No point in letting them befoul the place more than they already had.

He heard armored feet making a din behind him and gestured to Breya, and together they melted into the brush. Soon enough, a pair of Dwarves and a Human came into view, carrying ridiculously large rifles. He watched them find the Troll corpses and begin fanning out, never once suspecting he was there. He’d learned from the Highmountain — when the blessing had been imparted — how their scouts managed to stay undetected despite their massive size. It hadn’t been an issue growing up in Mulgore, but now he was glad of it.

He could kill these as well. A few shots to draw their attention, kill the Human before they even knew he was there, then he and Breya could easily dispatch the Dwarves. They were loud and clearly were not listening to what Nazmir was trying to teach them… but he knew he did not need to kill them this time. There were more Blood Trolls, and these three would draw their attention. Leaving them alive meant an easier path back for himself.

Breya cocked an ear, waiting for a command. He gently lay a hand on the great wolf’s head, stroked its long fur. Then he gestured, and they melted into the deep rain forest together.