Off Topic: Upcoming Lord of the Rings TV series welcomes the Second Age and the Rings of Power 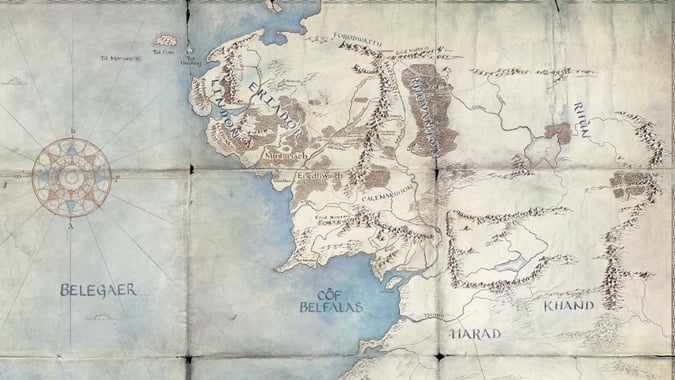 A new Lord of the Rings show has been in development for Amazon Prime, but new teasers could take it in an unexpected direction. When we first heard about a LOTR series, rumors suggested it centered around a young Aragorn’s adventures before the events in the books. But Amazon recently began releasing images of maps with subtle differences and references to the Rings of Power. The latest map showed the island of Númenor with an announcement “Welcome to the Second Age.”

The reveal of Númenor created waves of excitement among fans. The island has a long history — nearly the entirely of the Second Age — and Aragorn is descended from its earliest king. Many fans are hoping the series will focus on Númenor and its kings, but there are clues that it could feature the elves and the creation of the Rings of Power.

While the map saved Númenor for the surprise reveal, the names on the map are all in Sindarin — the Elvish language. The maps have been progressively going back further in time, with minute name changes giving fans significant details on the possible story. These fans have been able to pinpoint a time range using location names and even the lack of certain locations. Mordor disappears between one map and the next. Barad-dur, Sauron’s fortress, has yet to be built. The Mines of Moria are still known as Khazad-dûm, the great city of Dwarves. Galadriel’s realm of Lothlórien is referred to by the earlier name of Lórinand, implying the map was from the period when Galadriel arrived there. And the forest of Minhiriath is still whole, when it was cut by the Númenóreans to build ships during the seafaring age and the rest was later burned by Sauron.

These details place the show in a several hundred year range in the Second Age, smack dab when the Rings of Power were created by the Elf Celebrimbor. The tweets teased the Rings of Power, with the last reciting the famous words regarding the One Ring — on the surface reinforcing the popular series, but also highlighting its origin. It’s a great introduction that bridges the show and the Lord of the Rings movies.

Like the movies, Amazon originally only had rights to Lord of the Rings and its appendices. The Second Age, however, falls outside that and is detailed extensively in The Silmarillion, the great history of the universe of Lord of the Rings. Christopher Tolkien, the son of J. R. R. Tolkien and head of the Tolkien Estate, had long been vocally against any further adaptations of Tolkien’s works, which makes sense considering the stories represent his childhood and he spent a large part of his life curating his father’s work. The Silmarillion meant a great deal to him in particular, as he published it after his father passed. He spent a great amount of effort compiling the stories from his father’s writings and even creating parts entirely from scratch. He also published his father’s other manuscript drafts like Unfinished Tales, History of Middle Earth, and his letters.

But Christopher stepped down as director of the estate and trust in 2017, and it appears Amazon has since acquired rights to Tolkien’s additional works. Many of the names and periods of the Second Age are featured in Unfinished Tales, as is the map of Númenor. The name of Tol Morwen in particular is only mentioned in The Silmarillion and the History of Middle Earth. Tolkien’s grandchildren and great-grandchildren have been more open to bringing Arda to more media. With both the Tolkien Estate and The Tolkien Trust working with Amazon on this series, I trust that the lore is in good hands.