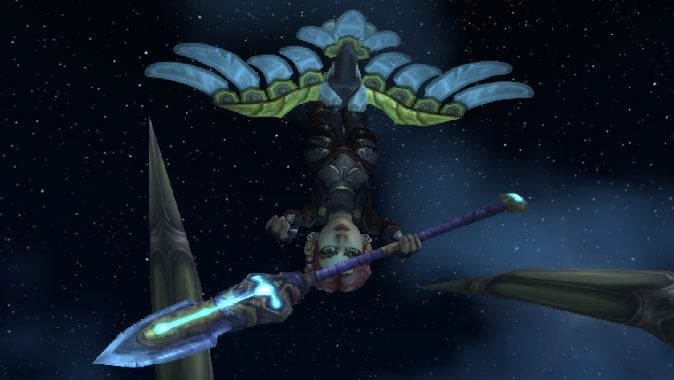 Rjagoda asked whether Liz was writing the Queue today, and I hate to break it to you, but she is not. Where is she? Let’s just say she’s indisposed at the moment.

And now that you have your answer, now let’s move on to the Queue.

Q4tQ what makes a patch successful in your eyes? Is it the content? Is it a clean roll out of new features with a minimum of bugs? Is it stable servers?

Honestly, I think it’s all of the above. A good patch has to have great content, be relatively free of bugs, and be stable enough to play it on launch day. Two out of three — which is what I feel we had today — isn’t bad, but it’s not good.

8.1.5 is a heck of a patch. It has tons of content, with new Allied Races, new story quests, new World Quests, and some new just plain silly quests. I genuinely had fun playing on patch day, and I got a few ilevels to boot.

And in a few weeks, we’ll get even more content when the Darkmoon Faire opens up with its brand new roller coaster. And also there’s the Crucible of Storms but I think we all know that roller coasters are more important. So patch 8.1.5 is already good, and it’s going to get better as more of its content opens up.

But you have to be able to play to appreciate a new patch. And that’s where 8.1.5 hit a snag, because the servers were laggy all night. A number of the quests piled players together, either without phasing or without enough phasing. Chatting, interacting with objects, and even clicking to turn in a quest tended to result in a few seconds’ delay. And some people couldn’t log on or stay connected. It was playable, which is a big win — but it was sluggish and sometimes frustrating.

You expect some of this on any patch day, but in the end, playability is paramount.

However, a patch goes beyond patch day. I expect tomorrow things will be smoothed over and everyone will be able to get in on the fun. But at this precise moment, I would rate 8.1.5 a B overall. Give me a week or two to forget yesterday’s lag, and that grade will probably go up.

Am I the only one NOT planning to immediately do the unlock scenarios as soon as the servers come up? I’ll probably just hit my WQ emissary and go on as normal.

According to the achievements that were dinging away in my guild chat — and the comments in the Queue — yes.

I haven’t done it, either, but that’s just because I’m lazy and never finished the quest chain. Yes, I’m that lazy. I’ll get around to it eventually, because I actually would like to play a Kul Tiran Druid. (My Zandalari progress is even worse, since I haven’t even finished leveling a Horde character.)

Q4tQ: Since Forsaken and Death Knights are dead, do their nails* stop growing? Do BElf DKs save tons of money on nail polish?

*Ignoring the false growth that happens at death due to skin shrinkage.

I posit that, because all races and classes can get haircuts, that we all have hair that grows. After all, the undead walk and talk, so they’re already not following the standard rules for corpses. (Okay, they could all be wearing elaborate wigs, but I’m going with Occam’s razor here.) That would imply that they also have nails that grow and thus require some maintenance, like a regular coat of polish.

But if you don’t buy that explanation, I would repeat the comments in the thread and say that polish chips off and otherwise gets damaged, so eventually you have to put on a fresh coat. There is an exception for gel, which is some kind of witchcraft that won’t budge — but there’s a different hazard there. Taking it off involves scuffing up the polish with a corse file, soaking in polish remover, and scraping off the rest. So let’s say their nails don’t grow. They’re stuck with this color forever because their nails probably couldn’t put up with the abuse of regularly removing gel polish. And a standard sort of polish will last a week, at most, before it starts looking shabby.

So, going back to Occum’s razor, the most straightforward explanation is that their nails grow and they redo their polish regularly.

Listen. All I know about this question is that Strom’kar is a weapon. Probably.

So I think you should ask this question again on Thursday for Rossi to answer.

So, um, does Brann have a new voice actor?

I’m coming in here with the very useful answer of “I don’t know.” I thought his voice sounded different too, though, and since there’s no official rundown of every WoW voice actor — particularly not patch to patch — there’s no way to say with total certainty. Andrea Toyias, the Voice Director, hasn’t commented on the voices in this patch, so we can only go by our ears.

Right now two of us think Brann sounds different, but that’s hardly a majority. Did anyone else feel like Brann wasn’t quite Brann in the latest Heart of Azeroth questline?

When they were first released, heirlooms were tremendously powerful. Their stats were better than gear you would get anywhere besides dungeons and raids — and in some cases they were still better. And for slots like shoulders, trinkets, and rings, you could get heirlooms well before you would find gear drops, giving you a big power boost at low levels.

But Blizzard has made no move to improve them, and I don’t think they will. Heirlooms simply aren’t the best pieces all the time anymore — they’re a convenience. They give you a nice XP boost and mean you never have to think about gear. Equip a set of heirlooms at level 1 and you can play through to 120 without swapping out most of your gear. (Okay, you probably want to get your Artifact for the Legion levels, but you shouldn’t happen to.) And of course there’s the biggest advantage of not swapping gear all the time: you don’t have to update your transmog constantly.

Honestly, I think it’s better that they aren’t completely, unequivocally better than all other leveling gear. It means you aren’t at a huge disadvantage if you don’t have them, which is good for new players. Sure, you won’t level as quickly if you don’t have Heirlooms, but there isn’t a huge power imbalance.

But at BfA levels… I don’t know. That’s such a difference that there’s just no point in using them at all. I do think Blizzard is intentionally evening the playing field with regards to Heirlooms, that can’t be right… can it? It can’t.

While we all continue ponder that puzzle, I shall bid you a good day. I (or someone imitating me) will see you again next week.