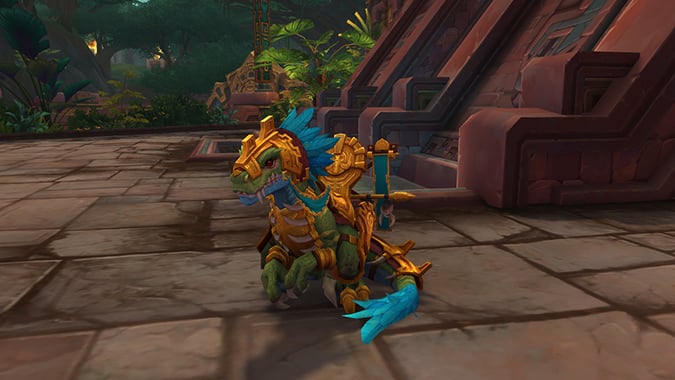 When I saw Talanji’s mount take a seat, my first reaction was “Oh my gosh this is the cutest thing I’ve ever seen,” but it was quickly followed by, “Why don’t any of my raptor mounts do that?”

I do not have an answer. However, this has opened my eyes to a wild new world in which almost every mount could, in theory, take a seat and be pretty dang adorable while they do it. I think I really need this in my life — who’s with me?

Something I’m not clear on: All these gnomes in Kul Tiras – were they already living there when we arrived, or did they come with us?

They were already in Kul Tiras — Parin Tinklocket mentions that a friend of his even had a tinker shop in Boralus, which implies that said friend has been there for a while. Unfortunately, all the Gnomes that were in Boralus have disappeared, which is why Parin’s out in the wild — he’s looking for them. So Gnomes aren’t uncommon for Boralus or Kul Tiras at all. Honestly, with being a major port city and all, it’s entirely possible that Kul Tiras has seen most of the Alliance races before, and most of the Horde races as well. I mean, you have pirates to the south, and pirates will take just about anyone, you know?

I started doing the new Raiding with Leashes achievement. I ran half of SoO, got no pets, then realized that wasn’t one of the raids. Ran Terrace of Endless Spring, got both of the pets from there. So now I’m thinking, “Great drop rates, this’ll be done quickly.” Ran MV, got one pet. Oh, gonna take longer than I thought.
I didn’t have time to run HoF last night, not sure the drop rate there. Probably gonna be focusing on this all weekend, see if I can’t finish this up first week and get my Sha of Happiness.

As someone who’s done all previous iterations of this achievement, I can tell you my experience has traditionally been that I get 90-95% of the required pets in the first week or two. That’s followed by several months of running one particular raid every week waiting for those last one or two pets to drop, because they never seem to do so. I got Invincible before I got the last pet off the Lich King encounter.

I’m not saying everyone’s experiences will be similar, but I am saying that maybe expecting to knock out that achievement in a week or two is a case of raising your expectations just a wee bit higher than advisable. It’s worth the grind, though!

QftQ: Where do you pick up the next step for the Vol’Jin questlines? I got the part where Bwonsomdei finds out he’s not there, and the cinematic where Vol’jin talks with Talanji. But the quests to go visit who might’ve told Vol’jin to place Sylvanas on the throne…where do I pick that up?

I’m not sure exactly what step you’re on — if you have yet to encounter/complete the quest where you’re sent to defeat G’huun, you’ll want to head to Zanchul — you’ll see the quest marker, Bwonsamdi is waiting for you outside on one of the lower levels. It’s a little out of the way, I missed it myself initially.

If you have already defeated G’huun and completed that portion of the quest chain, you should have a quest from Baine in Dazar’alor. But keep in mind there are prerequisites to that quest popping up. You need to be Exalted with the Zandalari Empire, and you’ll need to complete the epilogue of the War Campaign — and that requires defeating Jaina Proudmoore in Battle for Dazar’alor.

You can, however, complete this step on LFR — no need to join a full on raid team or anything like that. Once you’ve done so and turned in the associated quest, Baine should have the next step of the chain for you.

It can’t just be straight up void because the void fears Sylvanas too. Just what in the hell is going on behind the scenes?

That’s such an excellent question, but I don’t have an answer for you — yet. I will say that the whole Chromie situation last expansion still hasn’t been fully explained, I feel like there are plot points in that scenario that we’re missing, and I suspect those plot points are going to come back and bite us sooner rather than later.

I don’t think it was one person trying to kill Chromie, I think there were a lot of groups trying to accomplish that task — but I do think that there was one ringleader orchestrating the entire thing. The important question with the Chromie scenario isn’t necessarily who was trying to kill Chromie, it’s why they were trying to do so. What did she do that necessitated that kind of action?

Whatever it is, she hasn’t done it yet. At least, not in our timeline.

LUOTIANX ASKED, IN AN OFF TOPIC KIND OF WAY:

OH shoot. I was going to make fried rice for dinner, but I don’t have any left over rice. Time to drop back and punt. Suggestions?

Look I know this isn’t exactly on-topic, but as someone who has made more than a few batches of fried rice I feel like it’s my duty to fill you in on the rice thing. Ideally, you want day-old rice. If you don’t have day-old rice, you can just make some rice yourself — make sure you rinse it really well before cooking. When it’s done, spread it out flat in a single layer on a cookie sheet, stick the cookie sheet in the freezer for 15-20 minutes or so. Take it out, put it in a container, stick it in the fridge till dinnertime. It’s not exactly the same, but it’s close enough that you can make do.

Alternatively — next time you make rice, make a super big batch of it. Freeze what you don’t use immediately. It’ll keep in the freezer just fine, I promise!

Okay back to the usual topics, I swear!

Is it normal for weapons to break without death to cause loss of durability?

Yep! Your weapons and armor all lose durability over time. If you don’t regularly repair your gear, it’ll break on you. Usually the paper doll will pop up on your screen well before that happens, though. Just make sure you’re repairing your gear when and where you can, and it shouldn’t be an issue.

If I kill Ivus now, can I kill him again after the reset to use a coin, or can I only use a coin on the first kill?

You can only roll for loot once per cycle with the Warfront bosses — but their cycle is independent of the usual weekly reset. So even if there’s standard weekly server maintenance going on while you’ve got access to Darkshore or Arathi, you’ll still only be able to loot/bonus roll a single time. In other words, if you already killed Ivus and rolled for loot, you won’t be able to do so again come Tuesday. Sorry!