What’s the goofiest thing you’ll spend gold to do? 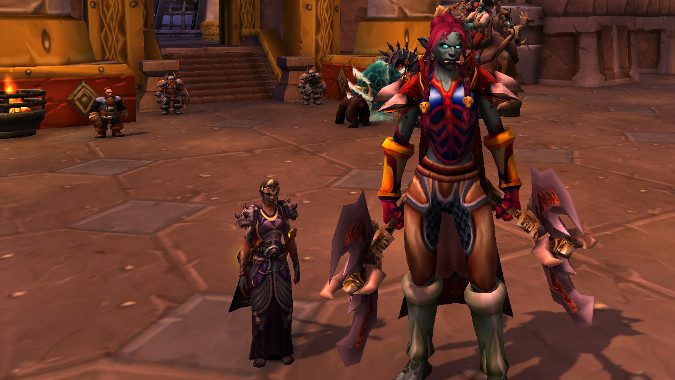 Look, I know it’s silly to want to be a twelve foot tall Zandalari Troll standing in the middle of Ironforge. I get that it’s borderline goofy to go and buy a bunch of Giant Growth potions for the express purpose of becoming the tallest thing outside the Auction House. However, I’m an extremely silly person at times and this amuses me on a level I can’t easily convey. When you are as inherently dour as I can be, anything that tickles my personal whimsy bone (patent pending) is to be indulged. So I dump gold on the AH, and I take a lot of screenshots of my characters being giants in ridiculous outfits, and it’s fun for me.

Similarly, I’ve dumped an unreasonable amount of gold on transmog gear I often can’t even wear. I have a lot of cloth and leather transmog items I’ve learned on characters I no longer play, or have never played — one of them, my level 92 Frost Mage, no longer exists at all but while he did he basically just farmed up transmog gear from Wrath, The Burning Crusade and of course classic WoW. I also spent money buying and shipping tons of cloth gear over to him for him to learn. And then one day I just deleted him, and I haven’t rerolled any cloth classes since — I just wanted to make sure I had a lot of that gear ready to go in case I ever decided I wanted to have a cloth class after all. I’ve at least kept my Demon Hunter and Monk, the characters I farmed all that leather on, and I still buy leather items and mail them to those characters frequently.

Yes, even though I don’t play them.

Look, I said it was silly to do these things.

So now I ask you — what do you know is ridiculous, and yet you find yourself in the AH spending gold to do it?

Blizzard Watch is made possible by people like you.
Please consider supporting our Patreon!
Filed Under: Farming, Gold, Silly, Transmog
Advertisement