Off Topic: Why Scotty was the largest T-Rex yet found, and why it matters 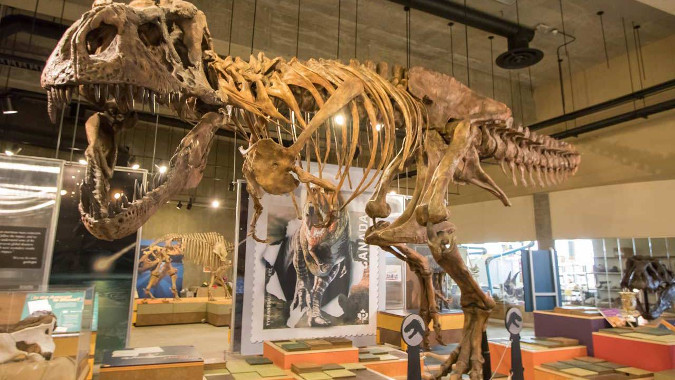 Dinosaurs were big. That’s not a universal truth, of course — Compsognathus for example was famous for years for being the smallest and even now is thought to have only weighed 7.7 lbs fully grown, and there have been even smaller dinos discovered such as Parvicursor or Microraptor. But overall it is fair to say that within the Dinosauria we can find some of the largest animals to have ever lived. Tyrannosaurus rex was one of the largest terrestrial carnivores of all time, rivaled in size only by other big theropods like Spinosaurus aegypticus and Giganotosaurus carolinii, and for a two million or so year period just before the Cretaceous – Paleogene extinction, was the largest and most dominant carnivore on Earth.

For years, a very well preserved fossil skeleton of a T. rex that’s been nicknamed Sue has been heralded as the largest found. Sue is also one of the most complete T. rex skeletons ever found, and resides currently at the Field Museum in Chicago, where they are quite popular on Twitter. However, recently a new specimen (new being relative, as it’s been known since 1991) has been hailed as the largest ever, with estimates of this 65% complete skeleton putting it ahead of Sue both in weight and length. This T. rex, nicknamed Scotty, was described in a paper at The Anatomical Record titled “An Older and Exceptionally Large Adult Specimen of Tyrannosaurus Rex” authored by W. Scott Persons IV, Philip J. Currie and Gregory M. Erickson. There have of course already been some back and forth debate on this subject — Sue is a more complete fossil than Scotty, being close to 90% complete whereas Scotty is 65%, and we’re making estimates in both animals cases. Either way, both dinosaurs were massive animals, with Scotty’s estimate of 8,800 kilograms putting them roughly 400 kilograms over Sue.

He is also estimate to be older than either Sue or Trix, another very large, very old Tyrannosaurs fossil, and since all three of these fossils are among the largest and the oldest such fossils found, a theory is gaining support that Tyrannosaurus never actually stopped growing. This is why it’s less important which fossil actually was the largest when they lived and more important that we have several well preserved fossils like Trix, Scotty and Sue to study. There isn’t, or at least there shouldn’t be, a rivalry issue here. Instead, what’s important is to realize that these finds are shedding light on one of the biggest and most fascinating predators ever to exist on land. Hopefully, we’ll soon find an even larger and even more complete specimen than Scotty.

One thing’s for sure, and that’s the fact that Scotty had it rough in life, with injuries including a tail wound that would have been nearly disabling likely caused by another Tyrannosaurus. One thing we’ve learned from studying well preserved fossil remains like these is that T. rex had an unequaled bite force, one that could crush even the heaviest bones of the animals it preyed on, so it’s likely Scotty’s injuries came as a result of a territorial dispute of some kind. That kind of injury preserved in the fossil tells us about how Scotty lived, what it endured and how it managed to survive and heal from a bite that could crush Triceratops bones to live well past 30 years old. And that’s all pretty amazing.

Still, Sue’s Twitter game is on point, you really have to admit it. There’s room for all three of these massive specimens, and many, many more besides. Tyrannosaurus was the apex predator across a wide swath of the world during the end of the Cretaceous (and closely related Tarbosaurus ranged across much of Asia as well) and so we have a decent chance of finding even more specimens, which means sooner or later Scotty may well be dethroned by an even larger contender. For now, it’s just great that we’ve got Scotty and have learned so much from this find, and from all the other excellent Tyrannosaur specimens.