Off Topic: Why you should read Jirel of Joiry by C.L. Moore 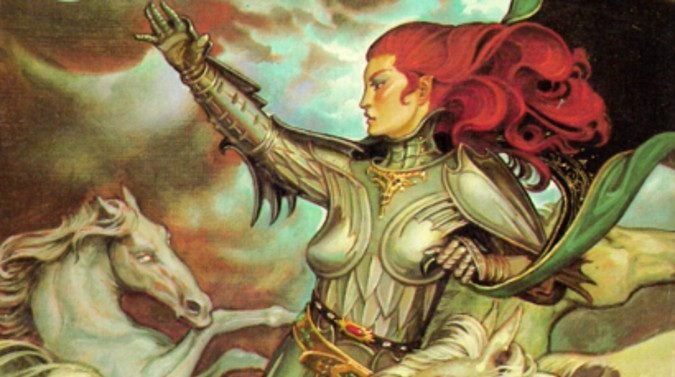 Catherine Lucille Moore was an American writer of science fiction and fantasy who lived from 1911 to 1987. Some of her most famous works date from the 1950’s — she was one of the very first women to make a name for herself in the field of science fiction. She wrote some of the best short stories in that field — her story “Shambleau” was her first professional sale, and is one of her most famous stories as well as being one of her stories starring the character Northwest Smith, who is the roguish space cowboy all future roguish space cowboys would be based off of — and yes, I’m looking at Han Solo here. As gifted as Moore was at science fiction, for my money her best character and most moving stories are the Jirel of Joiry series of dark fantasy tales. Moore’s skill shines through in every blazing white-hot sentence starring Jirel, the warrior lady and master of Jirel, a fictionalized keep in a medieval France that never was.

Now, I love a lot of fantasy, and many famous characters in fantasy are dear to my heart. But I honestly think Jirel of Joiry has been one of my absolute favorites from the first moment I read “Black God’s Kiss” back in my 20’s. There’s an edge of ruthlessness to Jirel that you rarely see in any fantasy character now and even at the time they were published you wouldn’t see it often. Moore was writing these stories in a world where Howard’s Conan and Leiber’s Fafhrd and the Grey Mouser had already existed for a while, but she manages to completely tell unique stories all her own within the field. “Black God’s Kiss” is a story about a woman who has lost nearly everything and the lengths to which she’s willing to go to destroy the man who sought to control her, and it cements a picture of Jirel as utterly unwilling to bend to the expectations of a medieval milieu that had very specific ideas of what a woman’s place is. Moore returned to the character a scant few times, usually collected in one volume under the name Black God’s Kiss or Jirel of Joiry.

We don’t have time of space to truly do Moore justice. We don’t really even have time or space to even do so for Jirel herself — but with only five relatively short stories to read (six, if we count one that she wrote in collaboration with her first husband, Henry Kuttner, before his death in 1958) I can at least tell you that you absolutely should read them all as soon as you possibly can.

Jirel is a unique creation — equally passionate in love and hatred, willing to risk Hell itself, or a place even worse than Hell, to both find revenge and to grant peace to the very same person she destroyed in the name of that revenge. Created at a time when relatively few women were allowed to reach prominence in the field, the Jirel stories reflect that same struggle — they seethe with the restrained violence of a woman constantly at war with the world around her. If you have not read them, I implore you to do so. It is rare to read fantasy that understands that emotions are not weakness, and that weeping does not preclude power, but can actually provide it. Jirel stalks alien planes and battles forces that blight souls, and she does so with both love and hate as her weapons.

I only wish C.L. Moore had written more of her.