The Queue: All work and no play makes Mitch a dull Mitch 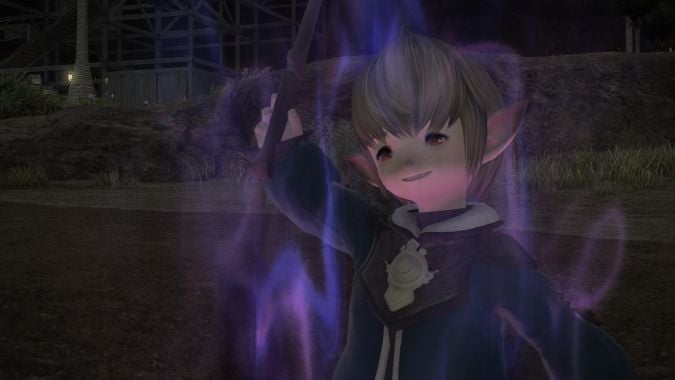 Today’s title comes courtesy of SPencer Morgan, who… look, just make sure he’s okay, all right? I can only keep so many eyes on him, and I need you to help. Sound good? Good.

Is still on timeout.

KALCHEUS KNOWS ME A LITTLE TOO WELL. TIME TO CHANGE THINGS UP!

I feel slightly called out here, dang. That said, The Queue usually is done in three steps for me. At some point (usually evening, sometimes during the day if I’m on top of things), I gather questions out of all the comments on Monday’s Queue and store ’em in a Word doc. Then, usually late at night (10pm or later), I select the ~8 questions I want to include and put them into WordPress so that the only step left is to answer them. And of course, the final step is answering and finalizing the little things (like intro/outro header).

That last step usually happens after midnight, sometimes happens before midnight (these are great nights), and, Yogg help me, sometimes Tuesday morning. I really hate finishing Tuesday mornings, and I’ve been a lot better about finishing Monday night lately. For the record, it’s almost 1 a.m. at the time of this writing. We’ll see when I finish the rest :P

AZVOLRIEN IS PREPARING TO PROPERLY PRAISE:

Is N’Zoth pronounced ‘inn-zoth’ or ‘nuh-zoth’? I can’t remember ever hearing it said in-game outside of a couple of voice clips in Dragon Soul, and they’re kind of difficult to make out.

“Nuh-Zoth” is definitely the closer of the two. It sort of depends if you say “Nih-Zoth” or “Nuh-Zoth,” but you get the idea. You can hear a lot of samples of this from Xal’atath’s voice lines. She has multiple, but there’s a solid one a few seconds into that video.

If you’re doing the Queue tomorrow & need questions: QftQ: Do you feel like Sylvanas has been prey to what some would call the ”Stupid Evil” syndrome in fiction? As a Sylv fan myself, It kind of feels like it a tiny bit, if I’m going by the usual stories definition.

I know I’ve said this before, so apologies if I’m repeating myself to some folks, but my ultimate judgment of Sylvanas depends on how her story ends. We’re maybe halfway through the expansion, and we don’t have any clue how it will end or what she will do. That will have a biiiig impact on what I decide when all is said and done.

But for now? No, I don’t think she is. I think the “problem” is that the storytelling has become more nuanced and character-focused than we’re used to in WoW. There’s a lot Sylvanas is doing that’s completely in character, and there are a lot of really explainable actions if you examine her more closely. But WoW does not have the same capabilities a novel does when it comes to getting in a character’s mind.

So while I do think a lot of players aren’t giving her enough credit and aren’t always looking too far beyond surface-level, I also think WoW/Blizzard could do something to bridge the gap between what a novel can do and what the game is doing. The game could do more, for sure, but the storytelling is evolving faster than the mechanisms of delivering it are. Does that make sense?

PAWKWARD LIVES UP TO THE NAME:

Q4TQ: Why won’t you ride on my Darkmoon See Saw?

I’ll ride anything if you pay me enough.

Because the Faire is over, of course! That’s definitely the reason.

SPOONYBARDOL HAS A FASCINATING QUESTION:

So speaking of plot-significant Artifact Weapons, which other ones do you think might pop up in the story in the future?

For instance, I think there’s a decent chance if and when we turn our gaze back to Northrend and the Lich King we’ll see the Blades of the Fallen Prince become significant, and depending on the nature of the plot possibly even an artifact like Ulthalesh or Ashbringer to counter it.

I’m kind of surprised Thrall hasn’t come looking for the Doomhammer, de-powered as it might be. He’s been a non-presence in the story since the start of Legion, though, so he might not even ever be back, but if so I wouldn’t be surprised if he wants his hammer back.

I admittedly don’t know each and every Artifact, but my gut tells me the ones that talked would be more likely to appear. I mean, that kinda just leaves the Arcane Mage and Demonology Warlocks ones (I think…) but I have to imagine that if they appear in the story, they’ll have to have a way to be significant to classes that didn’t originally own them.

On the other hand, you bring up a good point about the Death Knight weapons, and if Blizz really wants to bring Artifacts back into the story, they will. I don’t think they’ll abuse it, though, since it would sort of negate the ending of Legion to have multiple “drained” weapons returned and be powerful but who knows.

CYPHER ASKS ABOUT LEGION WEAPONS TOO:

QftQ: I have Legion Artifacts that still need to hit that 200 WQ mark for the hidden skin. Do BfA WQ count towards that? Or only Legion ones?

QftTransmogQ: Why can’t we transmog old Legendaries? Like the Sunwell Bow? The Wraithion Knives/Capes? Will they be changing/implementing this at some point?

To your first question: Wowhead comments indicate they do. You can track using this macro, if you want to be sure: /run AddTrackedAchievement(11153)

To the second question: Because Blizzard hasn’t made up their mind about transmog and the rules are super inconsistent. Their official answer way back when was something along the lines of, “Everyone would be using the Legendaries as transmog weapons if we allowed it” but that’s not true and also… who cares? Hopefully the forthcoming all-but-pants invisibility is a sign of future changes.

Q4tQ: Do you think these Warfronts we got in Battle for Azeroth will ever have a canon winner? If yes, who do you think that will be the winner of the ones we already know? Is there any other region that you’d like to see as a warfront?

I think they have to have a canon winner at some point, especially if Blizz ever puts out another Chronicle. If you remember, that’s how we know who officially defeated specific raid bosses. However, I don’t think having a canon winner means having canon deaths. Really, the deaths of ANY of the commanders we face would be too big a moment to not have play out in a cutscene or something more official.

Right now, I think Alliance would canonically win Arathi and Horde Darkshore. It gives both factions a stronger foothold in areas they attacked. As for future regions, I would actually be all for a Silvermoon Warfront if it meant updating that area in the process. I’d also be pretty interested in seeing a Warfront in Stranglethorn or Un’Goro just because I like the looks of those zones and also because Un’Goro has a lot of potential for Titan shenanigans.

That’s all for today! For those of you keeping track at home, it its now 1:15 a.m. — does that mean I finished Monday night still? I think so.