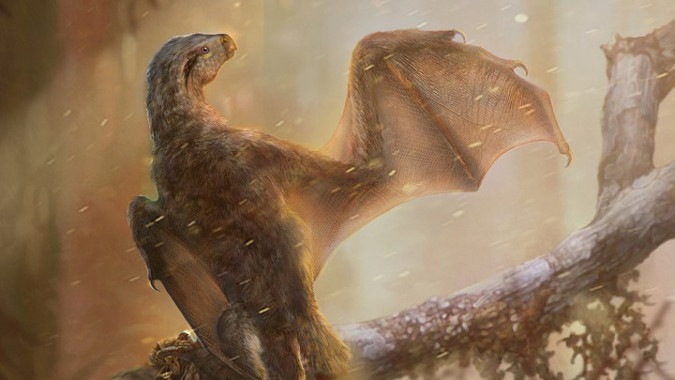 One major difference between the pterosaurs and the dinosaurs and birds has been how powered flight developed in both groups. Pterosaurs developed flight first and evolved a wide variety of powered flyers using a specific wing plan which would look familiar to any modern observer who’d seen bat wings. Like bats, pterosaurs did not use feathered wings to fly but instead developed a membranous wing that stretched skin across the extended skeletal structure. Until fairly recently, this was seen as a primary distinction between pterosaurs and their dinosaurian cousins — dinobirds grew feathered wings, while pterosaurs grew membrane wings.

Until fairly recently, because now we’ve got our second fossil of a feathered, distinctly dinosaurian animal with membranous wings. Evolution loves to laugh and point at us every time we think we know what’s going on.

Go ahead, get all your It’s a dragon squealing out now, because Ambopteryx does somewhat resemble our oldest mythical winged reptile friends. But she isn’t — instead she is a dinosaur, a feathery and nearly complete specimen that does a lot to flesh out — sorry, fossil joke — the Scansoriopterygidae and how these maniraptorian dinos clambered around on trees like modern flying squirrels. A previous specimen, Yi qi, had been found with bat wings similar to those of Ambopteryx, but the finding of a second such dinosaur helps establish that Yi wasn’t just a fluke and gives us an even better view of this particular variation in dinosaurian body plans.

I neither have the expertise nor the time to really explain how amazingly revolutionary these discoveries are, but not only does it establish that theropod dinosaurs were in fact using a kind of wing design previously thought unknown to their clade, it also establishes that birds as we know them today derive from a period when many different evolutionary strategies towards the development of flight were attempted. Modern bird wings do not at all resemble those of Ambopteryx and it’s unlikely that the birds derive from this branch of the Scansoriopterygidae, but it gives us a more complete picture of how out of a whole host of small, feathered, very birdlike animals we ended up with the birds we have today.

And yes, they kind of look like dragons, so go ahead and draw that fanart of Ysera and Alexstrasza with massive feathery manes.

Blizzard Watch is made possible by people like you.
Please consider supporting our Patreon!
Filed Under: Ambopteryx, Birds, Dinosaurs, Pterosaurs
Advertisement