What views have you found only because you can fly? 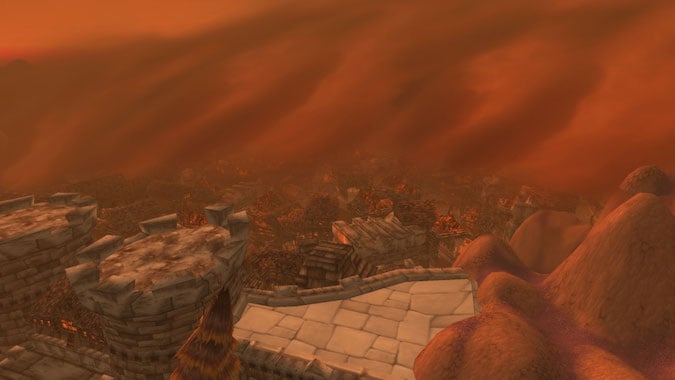 Some of you have probably guessed the image above is Stratholme. I was in Eastern Plaguelands mining iron, gold, and mithril to level blacksmithing because there are plate and mail pieces I don’t have in my transmog arsenal. I flew past the dungeon and was high enough that I could see into the city. I got flying in old content when it was available back during Cataclysm, but I had never seen this view before. You can’t go into Stratholme — there is an invisible barrier wall preventing that — so this is quite the striking view.

I seem to be always stumbling on small nooks and crannies in this vast world which I’ve never been to before. There’s a rare mob in the hills between Silithus and Feralas — straight south of the Ruins of Isildien. You’ll never get to its location from the ground. You have to fly there. You can land inside Dire Maul and Zul’Farrak but the bosses which make the dungeons are not available when you don’t go through the entry portals. Speaking of Feralas, there’s the hot springs south of The Writhing Deep — only accessible via a flying mount. The whole of the Ulduar complex is one of my favorite places in the entire game and a lot of it can’t be reached until you can fly.

Generally, flying is looked upon as a means to an end. You aren’t constrained by the direction of the flight masters. Many flight routes are — to be kind — a bit strange. It’s like going to Cleveland from Chicago via Nashville. When flying comes to Battle for Azeroth, I can head straight to my destination. Flying makes herbing and mining so much easier. I might still not be able to find that Siren’s Pollen the dot on my screen says is here, but you miners won’t have to wonder how the heck you get to that node up there.

The one thing that gets overlooked in flying is how it opens up the world. You’ll be able to sit on a mountain top and watch the sun set. You’ll be able to fly over all of Boralus and Dazar’alor and marvel at how the city looks. I can’t wait to land on those boats in the harbor in Boralus, to sit on top of the lighthouse off the coast of Drustvar, and fly above the canopy of Zuldazar, gazing down on the dinosaurs. I’m willing to bet I’m going to find places I didn’t know existed.

What location did you find only because you could fly? Do you have a favorite place to go because you can fly which is inaccessible from the ground?

Blizzard Watch is made possible by people like you.
Please consider supporting our Patreon!
Filed Under: Breakfast Topic, Wow Flying
Advertisement