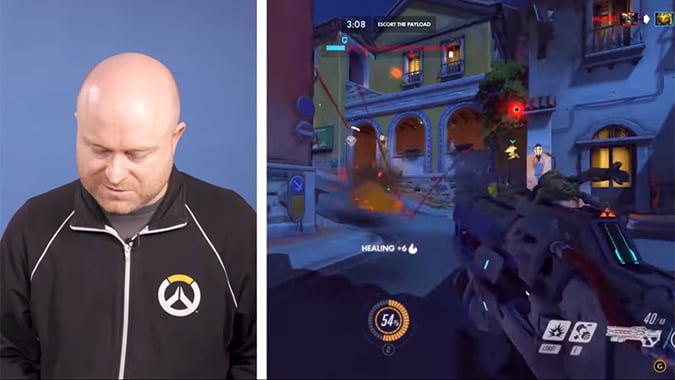 You wouldn’t know it from playing him, but Baptiste was created by mixing and matching other Overwatch hero mechanics.

In a recent GameSpot Audio Logs video, Lead Hero Designer Geoff Goodman explained the process of creating Baptiste — who, if you aren’t aware, is the Support hero that has the ability to grant his teammates immortality. And Baptiste — and his abilities — came from a mixture of abilities already in the game.

In the footage, you can see the early versions of Baptiste had him equipped with Soldier: 76’s Heavy Pulse Rifle, Zarya’s projectiles, Orisa’s ultimate, Zenyatta’s healing, and Ana’s hero icon. It’s a collage of hero traits and images that helped the team figure out how Baptiste would function in the game.


Like a lot of game development, it’s nice to throw big, unrefined ideas into a project and test them out. The Overwatch team knew they wanted a healer with a gun that shot both damaging projectiles and healing projectiles, so they put a hero together with what they had. At one point in time, Baptiste’s Immortality Field was a lamp stolen from one of the game’s maps. It’s a crude way to start to feel out how the hero works in actual play.

There are other parts of Baptiste that weren’t set in stone during the early phase of his development. Goodman notes that his ability to jump high into the air with his Exo Boots was a late addition that helped cinch up some issues with how he played. He also mentioned tightening up the size of his Amplification Matrix to balance it against other heroes’ Ultimate Abilities.

The video is a great demonstration of Blizzard’s process and why hero development isn’t without its hiccups. It makes you appreciate the fluidity of the game and the creativity in each of the heroes. So now when you see a new hero announced at BlizzCon this year, you’ll have a good idea of what they looked like before launch.

Blizzard Watch is made possible by people like you.
Please consider supporting our Patreon!
Filed Under: Baptiste, Geoff Goodman, Overwatch Hero Development
Advertisement