The Queue: A haunting reminder 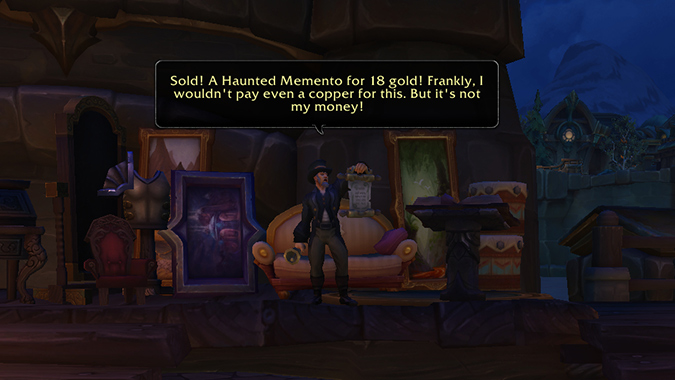 A stroll around Boralus had me stumbling upon an auction that brought back a flood of memories. Who here remembers the original Haunted Memento? Originally introduced during the Scourge Invasion event that heralded the arrival of Naxxramas in patch 1.11, it gave players the Haunted buff, which would cause a Scourge Haunt to follow you around. You could also throw it to other players, which would immediately trigger the /cower animation on them. In patch 6.0, it was nerfed to trigger a random 15 second haunting instead of a constant ghostly companion. Why? Weirdly enough, because the ghost was the number one source of creature spawns in the game, and it was causing server performance degradation.

That’s a powerful ghost. Let’s get to your questions!

As a follow up to my question I asked yesterday regarding opening up the Saurfang/Baine questlines: There are now prerequisites that did not exist before. The entire Saurfang/Baine saga is now on the other side of the raid step of the war campaign. The good news is once you hit 14k revered, the war campaign essentially propels itself to exalted (I had to do like 3 WQs to get actual exalted but it didn’t get me any more access), but yeah, you’re looking at doing all the tides of vengeance steps (*Snore*) and downing Jaina before you can start going after Saurfang and then Baine’s whole act of that stuff as of right now.

That is new. Not sure how new, but it’s new.

It’s not exactly new — the raid prerequisite has been there since the patch came out, as far as Baine’s portion of the story was concerned. However, they did merge the quests into the War Campaign when patch 8.1.5 came out, which shifted the Saurfang portions to after the Battle of Dazar’alor. So yes, as of patch 8.1.5, you do have to tangle with Jaina before the quests will pop up. Fortunately, this is something you can do on any raid difficulty — so you can just pop into Raid Finder and complete that step there to move on.

I think it’s a little odd that they decided to do this after the quests had already been out and available for some time, but…well, since you had to complete the Jaina encounter to move on regardless, I’m not exactly upset about it. It just means you’ll have a longer chunk of story to play out once you’ve cleared that encounter. And I should point out — you don’t have to do the rest of Battle of Dazar’alor if you don’t want to. It’s just the Jaina encounter that triggers it.

Q4tQ: Ever find a class or spec or whatever that you enjoy the feel and look but not the gameplay or vice versa?

1) The D3 Witch Doctor. I love pet classes in ARPGs, I love swarming out minions and just letting them do the work, but I hate, I HATE the aesthetics of the witchdoctor! The pets are ugly, the character aesthetic is all hunched over and more voodooesque than WoW trolls, and the only way I ever got to enjoy my WD was as a petless Jade harvester which is fun but way more work than a pet spec! Suffice to say, I love my necromancer, it saved Diablo for me.

2) The holy priest. On the other end of the spectrum, I love the aesthetic of the holy priest, I’ve assembled multiple conceptual holy priests in my mind but… I’m primarily a soloist and I hate healing dungeons. If they ever close the gap on soloability for the forgotten classes on that plane, I will almost certainly roll a holy priest at some point!

Plate classes — particularly Paladin and Warrior. I think a lot of the reason behind that is simply because I’m used to playing a Rogue. I’ve been playing one since all the way back in Burning Crusade, and they have a fairly frenetic pace of gameplay. While Paladins and Warriors can definitely pump out the damage, the pace of that damage is much slower, which makes me feel weirdly weaker overall. Death Knights were also included in this category, but after leveling one in Legion, I came to the conclusion that they weren’t as slow-paced as I’d originally thought.

The main reason I find them appealing to begin with? Transmog, of course! I have a lot of lovely plate pieces that I can’t wear on my Rogue. …look, I really like playing dress up, okay?

Q4TQ: Can you buy the new adventure mode in Hearthstone with gold? I sure as heck won’t spend any real money on it but I have like 10K gold lying around.

Yes you can! The first chapter is free for everyone, but additional chapters will cost you 700g apiece, for a total of 2800g. Sounds like you’ll still have a whole pile of gold left over even after picking this one up! If you don’t happen to have a pile of gold just sitting around, or you’d rather just pay cash flat out, the cost for all four chapters is $19.99.

Sooo . . . . will shamans have tanky aspects in Classic? I thought they did back in the day.

You’ll see Shaman with certain tank-like aspects, yes. Rockbiter weapon in particular leans towards that aspect — it imbues your weapon with increased melee attack power and increased threat. But don’t expect to tank with a Shaman outright. While they can grab threat off a tank for a second or two if necessary, they don’t really have the damage mitigation to properly pull off tanking boss mobs. So really, they work as an emergency “Oh no everything’s going horribly” off-tank in a pinch, but they aren’t really kitted out to be a proper tanking class.

Q4tQ: Will we be able to use mods in Classic WoW?

We haven’t heard anything explicitly stating that we won’t be able to, so I’d say the answer is leaning towards a probable yes. However, mods that are around today are obviously not going to work correctly with Classic — they’ll have to be re-worked or re-written entirely to work with Classic’s code. People were able to use addons back then, so I don’t really see why we couldn’t use them in the Classic iteration, provided they aren’t game-breaking.

Q4tQ: Do we know if Classic will be free to play, or an extra subscription?

I just noticed a TW token quest in my bag, Can I turn it in now or is it like the DMF ones and I have to wait for MoP TW to turn it in?

Unfortunately, you’ll have to wait until Timewalking rolls around again to turn that one in. I sort of wish they’d let the vendors stick around just for the absent-minded (like myself), but I understand why they do it — it’s a limited-time event, after all.