Season 18 just started in Diablo 3, but you’re probably already rushing your way towards level 70 or beyond. After all, some folks blazed to Paragon 300+ the first day of Season 17… but most of us aren’t quite so fast. But eventually we all get there, and then the question becomes what now?

We’ve talked about Adventure Mode before, of course. You can keep playing Diablo 3 indefinitely by doing Bounties, which are very similar to what we’d call World Quests and Emissaries in World of Warcraft. And there are Nephalem Rifts and Greater Rifts waiting for you, with as high or as low a difficulty level as you want.

But that’s the problem we’re going to talk about this time. How do you know what difficulty level you’re ready for? When you’re a fresh level 70, you can’t just jump into Torment XIII and kill your way to loot — you’re wearing mostly yellow gear if you’re lucky and you will explode like a bottle of cola after someone threw in some Mentos and shook it up in a paint mixer if you tried it. So how do you know when you’re ready to step it up? And what level should you step it up to? 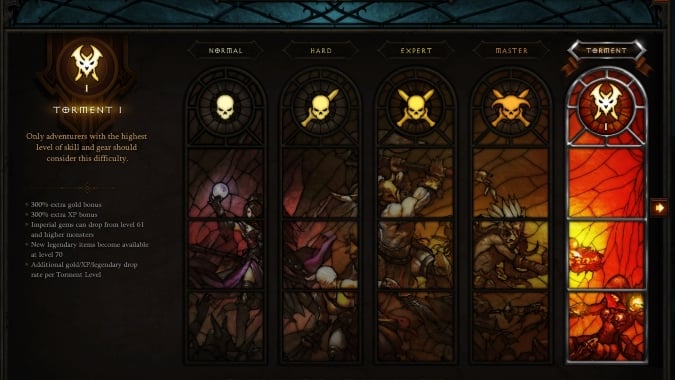 What are Torment levels?

Originally, Diablo 3 had Normal, Nightmare, Hell and Inferno difficulties, but players generally felt like it was too difficult to fine tune the difficulty and it felt either too easy or too difficult once you’d jumped a difficulty level. When Reaper of Souls came out, it refined and redesigned the difficulty system to the current one, where the game starts at Normal then scales up to Hard, Expert, Master and then reaches the Torment difficulty, which scales from Torment 1 to Torment XVI as of Season 17 and Patch 2.6.5. Each level of Torment increases the experience gain and gold/loot that drops. Torment XVI (or Torment 16, which is what I’m gonna call it from now on because we’re not actually in ancient Rome) has a 7000% gold bonus and a 17,000% XP bonus, and of course comes with a commensurate increase in difficulty. Also, not only are there new legendaries that only drop on Torment 1 or above, but the chance of said legendaries dropping is buffed by each subsequent Torment level.

The official site has a complete breakdown of each difficulty level. But in case you don’t want to go click a link, here it is.

Ultimate Evil Edition for PlayStation®3 and Xbox 360 have difficulties Normal through Torment VI, while Playstation®4 and Xbox One include up to Torment XVI.

So by now, looking at that chart, you’re likely painfully aware that you’re not going to rock up to Torment 16 in your Hey, I just dinged 70 gear, in much the same way that you’re not going to be tearing through Greater Rift 90. But how will you know what Torment level you are ready for? Well, chances are you’re ready for a higher level than you might think. In fact, you may well have been ready for Torment 1 through 3 before you even hit level 70, even on a Seasonal playthrough where you don’t have access to the gold and equipment you normally would have. 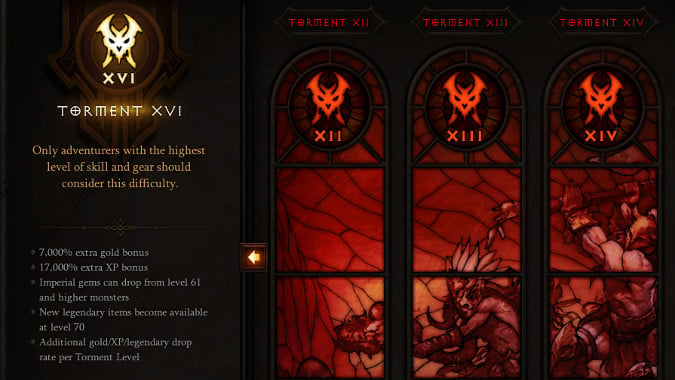 Finding your way through trial and error

The easiest way to find your level in Diablo 3 is to simply try. I could sit here and tell you how to decide if the Damage, Toughness and Recovery on your character sheet translate to you being able to handle a specific Torment level or if your set bonus (like the simply amazing Might of the Earth set giving my Seismic Slam 20,000% more damage) means you can jump up a few Torment levels but ultimately, the easiest and best way to find out if you can do a Torment level or a Greater Rift difficulty is simply to get in there.

Assuming you’re not playing Hardcore — if you are dying means your character is gone forever — otherwise dying a few times simply isn’t a big deal in Diablo 3. It’s the best way to learn what your current build’s strengths and weaknesses are and where your gear falls short of where you want to be for that difficulty.

I mean, sure, I hate dying in a video game. But that moment of panic when you’re about to die? That can teach you a lot about how to use your abilities and give you some insight into where you need to change your build up. Since we’re in the thick of Season 17, let me advise you to keep the following in mind:

Always remember, you can drop the difficulty if it’s too much, so don’t be afraid to experiment. You may find out you aren’t ready for a Torment level, but if you do, dropping it down is simple and you’ll be back to smashing waves of demons before you know it. Above all else, don’t be afraid of the Torment system, it’s here to help the game stay fun and provide a challenge. Embrace and explore it. It’s fun to work your way up to slaughtering everything.